Knesset discusses how to lower violence in Arab sector. 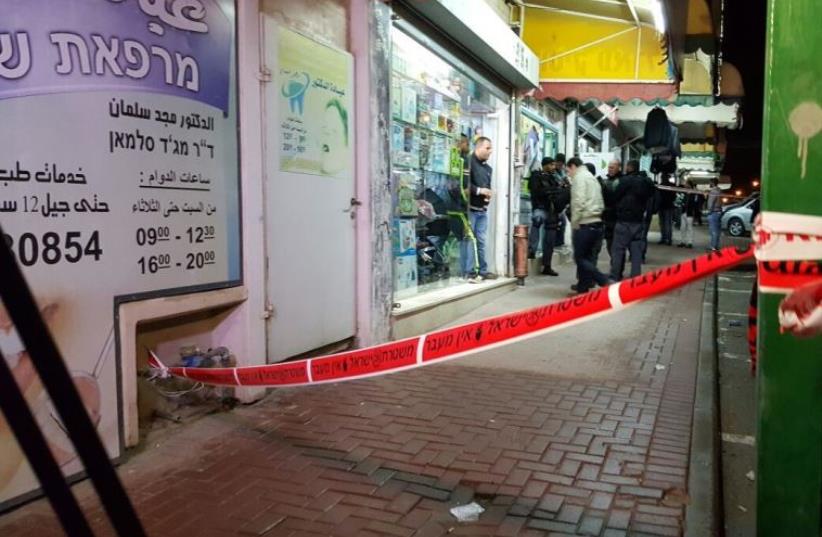 Scene where woman stabbed in town market in Rahat.
(photo credit: RAHAT SPOKESMAN)
Advertisement
Despite the issue being on the policy agenda for the past several years, crime in the Arab sector is not being properly dealt with, according to speakers at a meeting of the Knesset Internal Affairs and Environment Committee.During the meeting on Wednesday, which was held at the request of MKs Osama Saadi (Joint List), Mickey Levy (Yesh Atid) and Esawi Frej (Meretz), Sakhnin Mayor Mazen Ganaim noted that 1,165 Arab citizens have been murdered since 2000.”Some people claim that heads of local authorities do not cooperate, but this is not true,” he argued.”A senior police official said during a recent meeting that in a certain Arab community there are more than 20,000 weapons. We expect the police to treat us like citizens. People do not allow their children to leave the house after 4 p.m.In other countries ministers would resign over these statistics.”Saadi read a long list of names of Arab murders victims, the latest being a 16-year-old boy.“Crime and violence have taken over,” he said. ”We crave a solution that will follow the advice of Arab experts.”MK Haneen Zoabi (Joint List) told the committee that some witnesses who had turned to the police were turned away.”Police officers are friendly with crime families. It is the police who are breaking the law,” she said.Internal Affairs Committee chairman David Amsalem (Likud) asked Zoabi to transfer any information that corroborates her claims.“We are all in consensus on this. The state’s most basic duty is to provide security to every citizen. When there is no security for the citizens, there is no country, no society, nothing,” said Amsalem.“There is no distinction here between Jews and Arabs.”Joint List MK Yousef Jabareen said, ”The police have failed.”“I ask that the committee chairman consider establishing a state commission of inquiry that, together with Israel Police and the education and welfare systems, will once and for all produce something we can work with,” said Jabareen.He went on to add, “There is no law and no judge. In Umm el-Fahm there is shooting every night. We have data showing that most children aged six to seven have seen a weapon.”Amnon Beeri-Sulitzeanu, co-executive director of the Abraham Fund, an NGO dedicated to promoting equality and coexistence between Arab and Jewish citizens, told The Jerusalem Post the police are still not providing satisfactory service in the Arab sector.He explained that the Abraham Fund has an initiative called the Police and Community Safety Partnerships, that “creates a permanent mechanism for dialogue and accountability between the community leaders of each Arab locality and the adjacent police station.”Asked about the fact the police have begun to be more receptive to needs in the Arab sector, he responded that the police are not listening enough nor prioritizing the resources needed.Beeri-Sulitzeanu, who was at the Knesset meeting, said his NGO has raised the idea of a third party organizing meetings between the police and the community.“There needs to be dialogue every few weeks where each side voices demands and complaints,” he asserted.Earlier this year, the Israel Police promoted commander Jamal Hachrush to the rank of assistant-chief, making him the first Muslim to hold the second-highest rank on the force.Hachrush, who had previously served as deputy commander of the Coastal District, is in charge of a special police branch that is being set up to focus on the problems facing Israel’s crime-ridden Arab communities.At the Knesset meeting, he noted that the police are not doing a good enough job and stressed that the police need cooperation from Arab mayors.”It is true that police arrive late to [the crime scenes]. The statistics would shock anyone.This is why we have drawn up a plan to reinforce the police and provide the services that are required by law,” he said.“We are recruiting 1,350 officers, and we have started building police stations. We can’t do it alone. We need help. We are in charge of curbing crime,” continued Hachrush.“We want to build police stations in the [Arab] communities, but there is a minority which objects. There is a plan to recruit young Arab men and women, but there is no cooperation; people are getting cold feet.”On a conference call in April with the Inter-Agency Task Force on Israeli-Arab Issues, a coalition of North American Jewish organizations, Haim Sargarof, police commander of the Kedma Station in the southern part of the Triangle Arab area, said the number of officers in his station has jumped to 320 from 100.Police in the area also hold open houses with the residents of Arab towns, which sometimes includes mayors, he said, adding that he personally meets monthly with each of the seven Arab mayors in his region.Sargarof said these types of activities are held throughout the country, while surveys of the local community are carried out so the police can better serve the public.