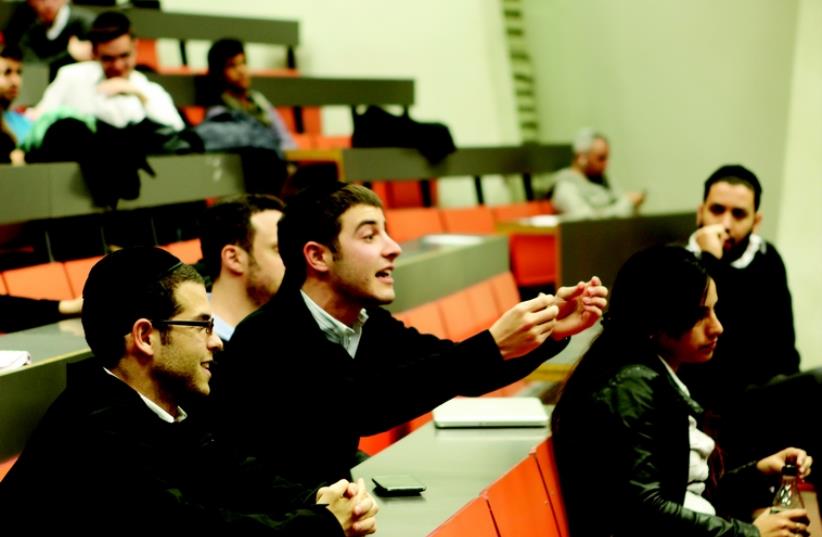 Etudiants haredim à l'université
(photo credit: DR)
Advertisement
Among the thousands of students preparing to begin or return to their university and college studies this Sunday, some 13,000 haredi students will also be heading to the halls of higher education this coming academic year.According to statistics from the Council for Higher Education, there will be approximately 1,000 new haredi students beginning a variety of courses this year at a broad array of institutions, including established haredi colleges and prestigious universities such as the Hebrew University of Jerusalem, the Technion-Israel Institute of Technology and Bar-Ilan University.The number of haredi men and women in higher education has been increasingly rapidly, albeit from a tiny starting point, over the past five years. Whereas in 2011, there were just 5,500 haredim in higher education, that number has more than doubled to this year’s figure of 13,000, an increase of 136%.Despite these achievements, several concerns have been raised by experts in the field of haredi education.Speaking to The Jerusalem Post, Prof. Dan Ben-David, a senior faculty member of the department of public policy at Tel Aviv University and president of the Shoresh Institution for socioeconomic research, said the rate of increase in haredi higher education, the dropout rate from higher-education courses and the quality of the education itself are all problematic.Although there have been significant increases in the numbers of haredim in higher education, this is partly explained by the overall growth of the general haredi population, which is growing very rapidly.According to the Council for Higher Education, approximately 4,000 haredi men and women start academic courses every year out of an annual cohort of approximately 15,000, roughly 26%, significantly lower than the national average of 50% of students who go into higher education.The second problem is the high rate of haredim who fail to complete their academic course.According to the council, there is a 50% dropout rate from higher education among haredi men and 30% for haredi women.Research data from Shoresh shows that these dropout rates are reflected in statistics that show that the number of haredi men and women in the workforce with academic degrees has remained static.In the decade from 2003 to 2013, the share of prime working-age Israeli haredi men, aged 35-54, with academic degrees has remained on average at approximately 15% of the haredi male population, with a similar figure for women.Figures for young haredi men and women, aged 20-34, are even lower, with an average of below 5% for men and around 10% for women.Ben-David says that the most basic reason for the high dropout rate among haredi students, especially men, is their lack of a basic education at the primary and secondary school levels.In 2013, 42% of haredi boys of elementary school age studied at institutions where no core curriculum subjects are taught, while such studies in other haredi elementary schools are often limited to just 11 hours a week.And just 2% of haredi boys obtain a school matriculation certificate, compared to the national average of 70%, along with 17% of haredi girls, although haredi girls, do in general study general education subjects in high school and take alternative exams.Ben-David added that the quality of education at some of the colleges providing courses for haredi men and women is lower than at research universities.Although such qualifications do assist haredi men and women in finding employment, the pay is often lower than that received by employees with more qualitative degrees, and the jobs are often in sectors not necessarily related to their field of study.Ben-David said the primary reason for the high dropout rate and the attendance of haredi students at colleges with lower academic standards is the absence of a general education at the primary and secondary school levels.As a result, he said, many gifted and talented haredi individuals are not fulfilling their potential, even when they manage to obtain a higher education degree.“As a country, we’re not running on all cylinders, and our national productivity is hindered because of this failure, and depriving children of the basic right to education is unconscionable” Ben-David said. “This prevents such children from making it to the higher levels of academic achievement and is hurting them and hurting us as a nation.“There is a reason that all other developed countries in the world provide a general education at the primary and secondary school ages, so we can’t put our heads in the sand and ignore something we know to be corrupt.”