More than 90 mayors and the heads of a number of social service NGOs are set to gather in at the Kfar Maccabiah hotel in Ramat Gan on Monday. 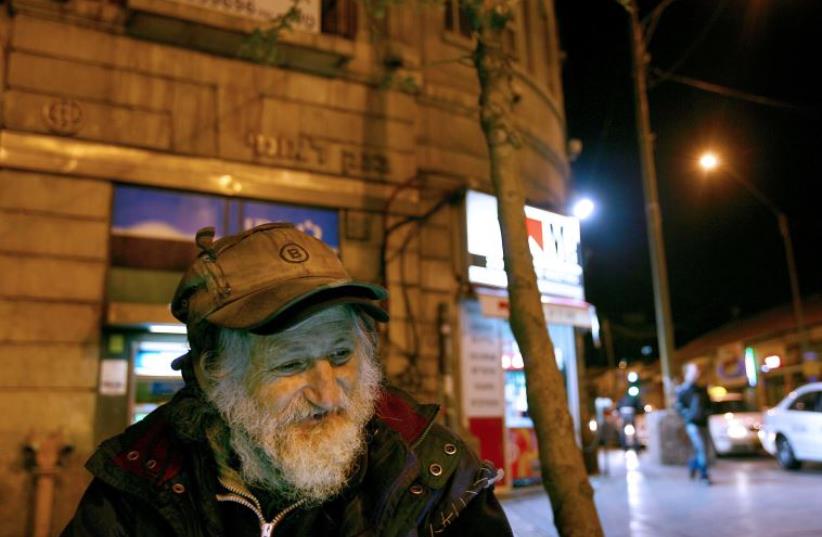 Dov, a homeless Israeli man, stands in Jerusalem
(photo credit: REUTERS)
Advertisement
More than 90 mayors and the heads of a number of social service NGOs are set to gather in at the Kfar Maccabiah hotel in Ramat Gan on Monday out of concern over the government’s 2016 budget.Calling itself a “coalition of social reform,” the group has pledged to “fight for welfare provisions in the upcoming budget.”Organized by the International Fellowship of Christians and Jews, the gathering will present a demand for the implementation of recommendations made by the Committee to Fight Poverty, which in 2013 was tasked by the government to formulate a plan to reduce the number of people living below the poverty line and to reduce the depth of poverty.The committee, whose members were representatives of academia, non-profit organizations, businesses and representatives of government ministries and municipalities, was responsible for making recommendations on the actions required by the state to combat poverty in all aspects of life.“We came to the realization that even though we are doing so much here in Israel, we can’t do it alone,” Rabbi Yechiel Eckstein, founder of IFCJ, told The Jerusalem Post.Citing what he characterized as growing caseloads for social workers, insufficient municipal welfare budgets and a fiscal crunch facing many non-profits, Eckstein said it was time to establish a “watchdog/lobbyist...to get the government to fulfill its obligations.”According to Eckstein, it is an “embarrassment” that income disparities in Israel are among the highest in the OECD, and that onethird of the country’s children live below the poverty line. Cuts in benefits coupled with rising prices have further exacerbated the situation, he said.More than a year after the Committee to Fight Poverty released its recommendations, the government had not taken any action, he asserted.“The battle against poverty is not in that budget,” Eckstein said. “We want the government to begin to allocate funds and budgets, and begin to implement the recommendations of the committee it formed to deal with this issue of poverty.”IFCJ grants are sometimes double those granted by the government to local authorities, he added, showing just “how little the government is doing.”According to a poverty report released in late 2013 by the National Insurance Institute and Central Bureau of Statistics, in 2012 there were 1,754,700 people, among them 817,200 children, in 439,500 households living below the poverty line. These figures represented 23.5 percent of the population and gave Israel the second-highest poverty rate among Organization for Economic Cooperation and Development countries, after Mexico.Lidar Gravé-Lazi and Niv Elis contributed to this report.