The children’s' fears were manifested in a number of ways with 50% of parents reporting their children were afraid to leave the house and go to public areas. 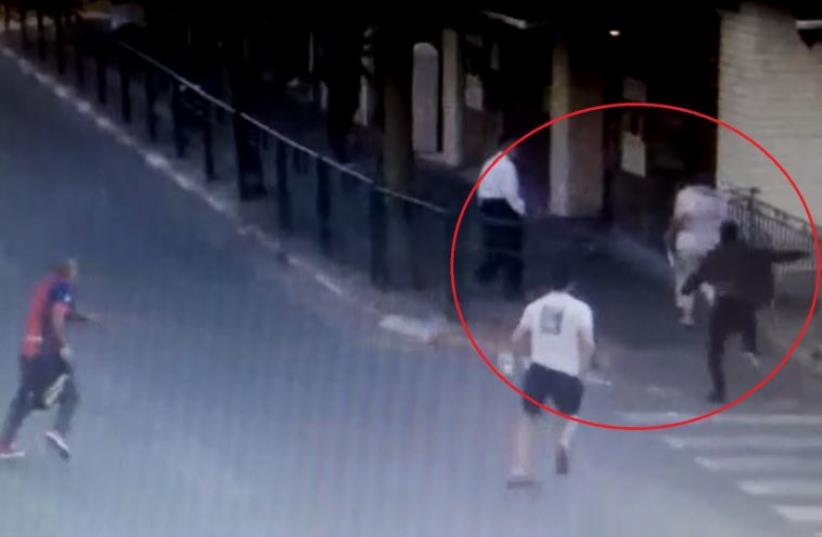 Stabbing attack in Rishon Lezion
(photo credit: SECURITY FOOTAGE)
Advertisement
As if the current threat of terrorist attacks and stabbings was not enough, now parents have yet another reason for concern.A recent survey initiated by Tom, a high-speed Internet provider that offers child safe Web surfing solutions, found that videos of the attacks on social networks are causing trauma in 80 percent of children exposed.The survey was conducted by Nielsen Israel among 300 Jewish parents of children aged 8 to 15 via an online questionnaire between October 29 and November 1.According to the findings, 97% of parents to children aged 8 to 15 said their children were exposed to the reality of the security situation in Israel in recent weeks, whereby the older the age of the child the more exposure they received.Nearly a third of children, some 28%, were exposed to the security situation via videos – the majority seen on social media sites such as Facebook and via the popular WhatsApp cellphone application.Additionally, according to parents, some 70% of children were also exposed via talks with family members on the issue, 66% were exposed within the school system and 59% were exposed via the news on TV.“The survey highlights once again what we have known for years: Parents today have no real control over the content that our children are exposed to,” said Yariv Peer, CEO of Tom on Wednesday.As such, 94% of parents said their children expressed fear or worry due to the security situation.The children’s fears were manifested in a number of ways, with 50% of parents reporting their children were afraid to leave the house and go to public areas.Furthermore, the results indicated that children who were exposed via videos on social media exhibited increased fear compared to their counterparts, some 80% compared to 60% of children.The survey asked parents to differentiate between two types of media: traditional media exposure through family talks, discussions in the classroom, television news casts, conversations with friends, newspapers and radio broadcasts; and Internet media exposure through WhatsApp, Internet news sites, videos, social media, Instagram and YouTube videos.The findings indicated that children who were exposed to the security situation via the Internet experienced an increased level of fear or worry in comparison to children exposed via traditional methods, some 78% compared to 68%.When asked if parents were doing anything to reduce their children’s exposure to the security situation some 60% of parents said they were trying to limit or shield their children in some manner, with nearly half of parents reporting that they did not allow their children to watch the nightly news broadcast on TV.Furthermore, some 92% of parents believed that blocking children’s exposure to videos of attacks and stabbing would reduce the fears among their children.“We can also honestly say that in the era of unlimited communication channels, it is impossible to block or prevent our children absolute access to information or videos, but you can minimize the damage,” said Peer.“The security situation today includes a digital reverberation of a security incident. This echo can and should be diminished for the safety of our children,” he said.YAIR LAPID (Marc Israel Sellem/The Jerusalem Post) HAIM JELIN (Yesh Atid) NAGAM NASRALLAH (foreground), coordinator of the Abraham Fund’s youth employment initiative, attends a conference at the Knesset yesterday about the problem of high unemployment among Arab women. (Courtesy Abraham Fund