A cause for celebration at the President's Residence 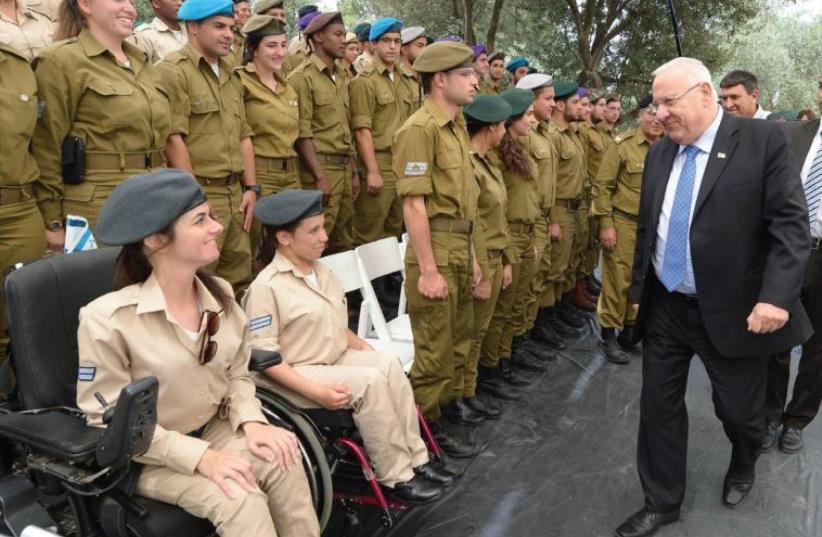 PRESIDENT REUVEN RIVLIN pays a surprise visit to some of the 120 outstanding soldiers who will be honored as part of the 68th Independence Day celebrations in Jerusalem
(photo credit: MARK NEYMAN / GPO)
Advertisement
As has been the case for many years, immigrants figured prominently among the 120 outstanding soldiers who received citations at the central Independence Day celebrations at the President’s Residence on Thursday. They came from France, the US, the former Soviet Union, Britain, New Zealand, Ethiopia, Argentina and Guatemala.One was born in Lebanon, and among the Israelis the most intriguing ethnic mix was that of Cpl. Meilin Tung, from Kiryat Motzkin, the daughter of a Filipina mother and a Vietnamese father.Speaking on behalf of all the outstanding soldiers – 66 of whom serve in combat units – Lt. Dvir Mashash, a deputy brigade commander in the Home Front Command, said they did not join the IDF to gain recognition and reward “but because we believe that it is our duty to protect this precious territory which is the State of Israel.” She voiced the hope that even those “who don’t believe in the path that we have chosen will decide to serve and contribute to the nation.”The prime minister, defense minister, IDF chief of staff and a wide range of former ministers and officials were in attendance.President Reuven Rivlin recalled how the people living in the Land of Israel waited breathlessly for the declaration of the State of Israel and listed 68 reasons why he loves Israel, plus one for next year.Among them were: the dream that became a reality, the vision, the spirit, the strength, the hope and the creativity.Also included were kibbutzim, moshavim, immigrants, the Mossad, the Police, the IDF, Operation Magic Carpet/ Operation on Eagles’ Wings (bringing Jews from Yemen in 1949-50), Operation Ezra and Nechemia (bringing Jews from Iraq in 1951-52), Operation Moses and Operation Solomon (bringing Jews from Ethiopia in 1984 and 1991, respectively), and musicians Arik Einstein and Yossi Banai.Prime Minister Benjamin Netanyahu emphasized that because there is a State of Israel, Jews have what they did not have before which is “the ability to defend ourselves.”The nation will always be able to rely on the IDF, he said.Defense Minister Moshe Ya’alon said he looked forward to the day when there would be peace and all the nations in the region would recognize that Israel is here to stay. As for internal hostilities, he wished that people could live by the principle of “Love thy neighbor as thyself.”Chief of Staff Lt.-Gen. Gadi Eisenkot told the outstanding soldiers they would become part of the IDF’s legacy of excellence and it was up to them to be paradigms for the next generation of soldiers.As he saluted them, Eisenkot said the IDF is not only the source of national security, but also a symbol of national unity.On Wednesday night, former president Shimon Peres released a video in which he recalled Israel’s first Independence Day celebration when the population numbered barely a million souls, and now 68 years later, the population has grown eightfold.The Israel of today has exceeded every dream of her founders, said Peres, adding with a smile that he knows something about 68 years, and from his particular vantage point, 68 is young.