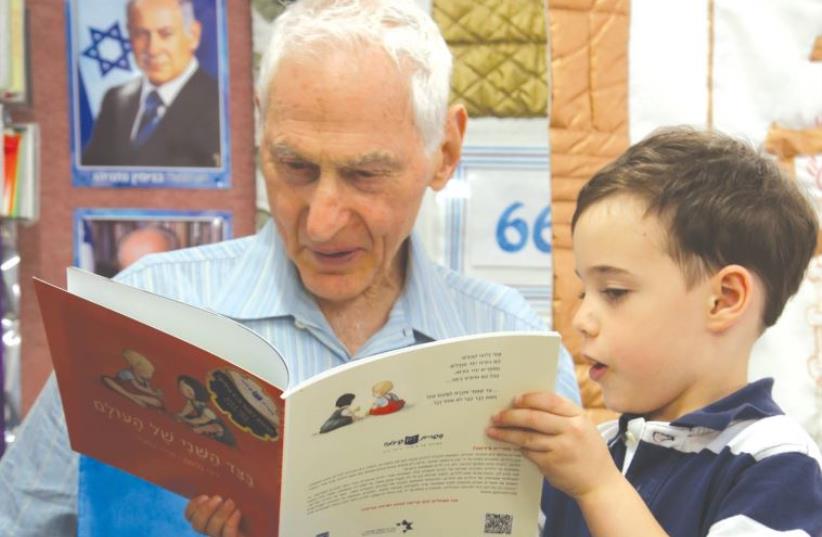 HAROLD GRINSPOON reads to a child one of the 10 million children’s books his foundation has given away
(photo credit: Courtesy)
Advertisement
When Massachusetts real estate tycoon, social entrepreneur and philanthropist Harold Grinspoon was a boy, his family was poor and couldn’t afford to buy books so Grinspoon used to trudge through the ice and snow with his dog to the library to borrow reading material.As an adult, fortune smiled on Grinspoon and, over the course of time, he became a wealthy man – but not one who wanted to hoard his assets.One day in 1993, he said to himself: “I’ve got all this money. What do I do with it?” He decided to invest it for a high return – not in terms of dollars and cents but in assuring Jewish continuity.Disturbed by the high rate of intermarriage among Jews in the US, and after reading a study that parents determine their child’s Jewish identity in the first five years of his or her life, Grinspoon decided that every Jewish child – whether with one or two Jewish parents, whether from an assimilated or a committed Jewish family – should have a Jewish book.Better still, such books should be sent to children of pre-kindergarten and kindergarten age so their parents would read to them so that the children would benefit not only from the contents of the book, but enhanced family bonding, as well.“Parents and grandparents love it,” Grinspoon told The Jerusalem Post on Monday.He loves it, too, and has been known to gather clusters of tiny tots around him while he reads them a story.The project run by the Grinspoon Foundation in collaboration with different partners now operates in 12 countries, including Israel, where it was introduced a decade ago, and is known as Sifriyat Pajama to Hebrew speakers and Maktabat al-Fanoos to Arabic speakers. The latter, meaning Lantern Library, benefits Arab, Beduin and Druse prekindergarten and kindergarten children.Grinspoon, 87, is in Israel to celebrate the distribution of Sifriyat Pajama’s 10 millionth book, and to honor the publishers, writers, illustrators and teachers who collectively spark an interest in books in children at the early stages of their learning processes.The ceremony will take place Tuesday evening at Ramat Gan’s Hayalom Theater.Although in the US, where the project is known as The PJ Library, and Canada books are delivered each month directly to children’s homes, in Israel they are first delivered to schools where some 8,000 classrooms throughout the country receive a crate of books every month.This includes a book for every child, plus two copies for the classroom.For two weeks, the teachers do creative things with the children based on the book’s text and illustrations after which the child takes the book home and drives the parents mad to read it to them over.“Sometimes,” Grinspoon confided, “the parents hide the book and say they can’t find it.”In Israel, the Grinspoon Foundation works in close cooperation with the Education Ministry, publishers, writers, illustrators and teachers.A survey by the Education Ministry found that in 37 percent of Hebrew-speaking homes, the Sifriyat Pajama books were the only books for children in the home. A similar survey has not yet been conducted in the Arabic-speaking sector, where some 45,000 children in 1,750 kindergartens receive books through The Lantern Library.Authors submit books or manuscripts to a review committee, and any book that is accepted is ordered in bulk from the publisher for mass distribution by the Grinspoon Foundation.Although computers, tablets and cell phones pose a challenge for anyone promoting books, Grinspoon said fears that children would disdain books for this reason are premature, and quoted a survey of a US program in which children ages 9-12 were given the option of having a tactile book of their own or relying on digital text. He was pleased to report that 88% opted for the tactile book.