A new national library for the People of the Book

Multi-purpose facility slated to open in 2020. 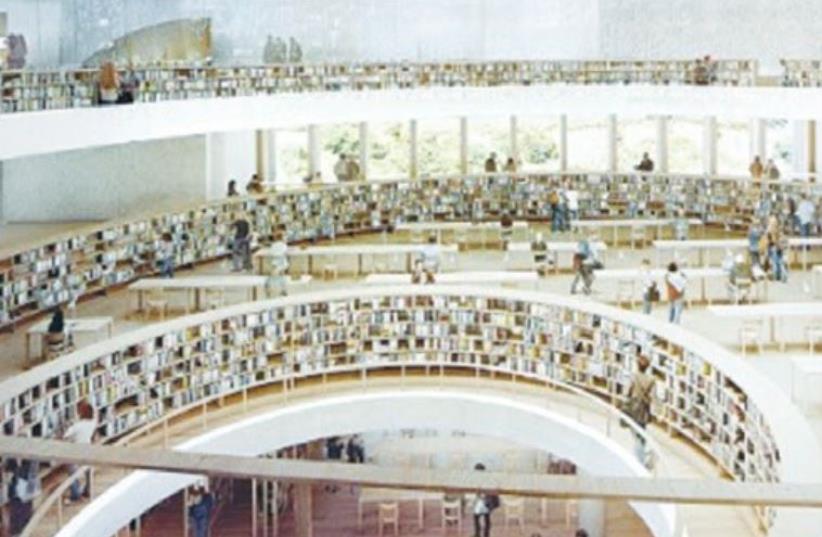 ISRAEL’S FUTURE NATIONAL LIBRARY, designed by Basel architects Herzog and de Meuron, will include a central reading room under a luminous glass dome.
(photo credit: HERZOG AND DE MEURON ARCHITECTS)
Advertisement
Fears that the replacing of books, newspapers and magazines by digital publishing will make libraries obsolete were obviated on Monday by the large turnout of local and foreign media invited to a press conference at the Jewish National and Hebrew University Library in Jerusalem.The press conference was called in advance of the laying of the cornerstone next Tuesday for the new $200 million National Library, which will stand opposite the Knesset. Scheduled for completion towards the end of 2019, the state of the art complex will open to the public in 2020.Funding for the library, which will incorporate reading rooms, a cultural center replete with art galleries and a 450 seat auditorium, will come in part from the government, but mostly from the Rothschild family’s Yad Hanadiv and the Gottesman Fund of New York.The journalists were introduced to the history and collections of the library by Aviad Stollman, who heads the National Library’s Collections Department; and were given a glimpse of how the new complex will look and operate by the director of the National Library Oren Weinberg.The National Library was established in Jerusalem in 1892, 400 years after the expulsion of the Jews from Spain, and was initially called the Isaac Abrabanel Library in honor of the head of the Sephardic diaspora, said Stollman.It was initiated by Joseph Chaimowitz, a Bialystok physician and an ardent book collector of Judaica, whose dream it was to build a national library for the Jewish people in Jerusalem.He donated 8,800 books to the project, which given the Jewish population in Ottoman-ruled Palestine at the time, was a huge number of books to give away.The library was initially located on B’nai B’rith Street, but after the establishment of the Hebrew University in 1925, it was realized by the board of the university that the new school must have a library. So the library was moved to the Mount Scopus campus, and it became the Jewish National and Hebrew University Library.But after the War of Independence in 1948, the library became inaccessible and its contents were moved to various parts of Jerusalem.In 1960 when the Hebrew University opened its Givat Ram campus, now known as the Edmond Safra Campus, it was the main building and was used mainly by academics, students and scholars, said Stollman.“People came from all over the world to use the library.”However after the Six Day War, when the Hebrew University returned to its original campus, all the social sciences moved there and another library was established on Mount Scopus, with the result that attendance at the National Library began to lessen. (The original library on Mount Scopus became the law faculty library.) There were other problems over the years, and in the 1990s a committee was established to look into the possibility of constructing a new national library, with a broader, more community- inclusive format.It was also decided that the new complex should not be affiliated with any single university, and that its role was to collect, preserve and disseminate the knowledge, heritage and culture of the Jewish People, and the Land and State of Israel.All this was incorporated into the National Library Law enacted in 2007.The new library, designed by the Basel architect firm Herzog & de Meuron best known for its bird nest stadium built for Beijing’s 2008 Olympics, promises to be far more user friendly than the current Givat Ram library.The facility, half below and half above ground, will be flooded with natural light.In addition to its collection of Jewish and Israeli books, manuscripts, photographs and newspapers, all of which have been or are in the process of being digitized, the library has a collection of Islamic books and manuscripts, hand-written documents by Isaac Newton and a collection of anti-Semitica.“You can‘t understand Jewish life, especially in Europe, without understanding anti-Semitica,” said Stollman.Because technology is evolving so rapidly, the library team wants to ensure that material that has been digitally archived can still be opened 25 years from now. It uses the Rosetta Preservation system which automatically upgrades itself as new technologies become available.“We are changing the library from within to make it available to the widest audience,” said Weinberg, explaining that the library, cultural center and educational activities will all be integrated.“We see a real need for people to come to libraries. We want to create a community,” he said.”He also made the point that library coffee shops and restaurants serve a purpose in this regard.One of Weinberg’s aims is to attract creative people in the hope that they will be inspired by the past, to create for the future. Weinberg instanced the library’s extensive collection of Jewish music which he was certain would be inspiring to young, contemporary musicians.Asked why Swiss rather than Israeli architects were chosen to design the national library, Weinberg replied that an Israeli architect living abroad had initially been chosen, but there were some problems so the search committee had to look again. As things stand the Swiss firm will be working together with the Israeli firm of Amir Mann–Ami Shinar.“It was important for us to have an architect with whom we could have a dialogue and who understands our needs and will not simply build a monument for himself,” said Weinberg.