A special first day at Shalva’s new complex in Jerusalem

“It is the most advanced center for children with special needs in the world,” said Jerusalem Mayor Nir Barkat. 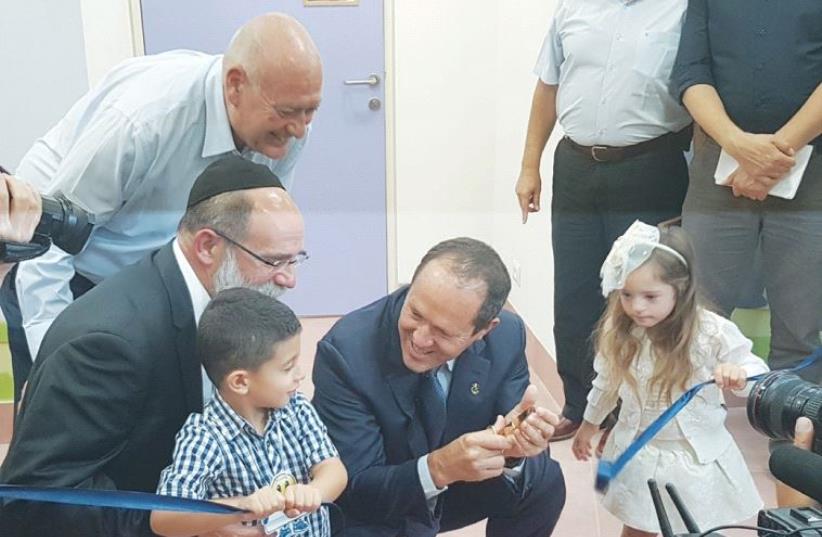 ERUSALEM MAYOR Nir Barkat (right) joins Shalva founder Rabbi Kalman Samuels and two children in cutting the ribbon for the kindergarten at the organization’s new complex in Jerusalem’s Beit Hakerem neighborhood.
(photo credit: SHALVA)
Advertisement
When Jerusalem Mayor Nir Barkat cut the ribbon for the kindergarten at Shalva’s spectacular new facilities in the capital’s Ramat Beit Hakerem neighborhood on Thursday, Rabbi Kalman Samuels smiled broadly.“It’s a miracle, in my eyes,” said an emotional Samuels, a Canadian immigrant who founded Shalva with his wife, Malki, in 1990 after their disabled son, Yossi, experienced a breakthrough in communicating. “Today is a day of celebration for all the people who will benefit from this beautiful facility. There’s nothing to match it.“We opened today with the pre-schools, and that includes 1- to 3-year olds at the daycare centers and 4- to 6-year-olds at the early-intervention kindergartens. Both of those entities are completely integrated and inclusive, meaning that each has regular classrooms of typical children of the same age studying next to the children with disabilities.”Shalva’s National Children’s Center, which is built on 2.8 hectares provided by the city a decade ago, offers special needs children everything from cutting- edge educational facilities to dining halls, a 400-seat auditorium, two swimming pools, a gym, a synagogue and accommodation for sleepovers.“It is the most advanced center for children with special needs in the world,” said Barkat. “For Jerusalem, today is a big celebration and a huge, important day. For kids with special needs, this is heaven. And the concept of reverse inclusion – hosting normative kids in a place built for children with special needs – is groundbreaking, the first of its kind.”There was much laughter and many smiles, as some 130 children – Jews and Arabs, religious and secular – began streaming in to Shalva for their first day, accompanied by their parents. Over the coming months, they will be joined gradually by more than 600 children.Ariel Achdut, whose daughter, Yael, will be four in November, said she is “very, very excited to be part of this new initiative.”Achdut, who made aliya from New Jersey a decade ago and lives in Ramat Beit Hakerem, added: “It’s a wonderful opportunity to introduce integration of this kind, and it enriches everybody, all the kids and the parents.”Shlomo Karp said he and his wife were “broken” when they first brought their disabled daughter, Ortal, to Shalva more than 14 years ago, when she was six.“At first, we didn’t know what to do. She was so afraid and she didn’t talk. Today, she does everything a normal kid does, with a bit of help,” he said. “Now she’s nearly 21 and is starting her national service here today, working in the kindergarten in Shalva.”Barkat shook hands with Ortal as he walked into the facility, and was told that she is now a leading singer in Shalva’s band.“Shalva was a jewel where it was in Har Nof,” Barkat told Samuels, referring to the old premises of the organization which are still operational. “Now it’s a big jewel, and an expensive jewel, but it’s worth every shekel and every dollar invested in this place.”Samuels said Thursday represented a “soft opening” for the new complex, which he hoped would be filled with hundreds of children of all ages by November. The official opening is set for April 17, 2017.“This place cost $55 million,” he told The Jerusalem Post. “Most of that funding came from the private sector and there’s still a gap of about $5 million to finish that number, which is a major pressure. It’s not about bricks and mortar. It’s about the ability to provide families, children, persons with disabilities the kinds of services that they deserve. It does wonders for the health of the mother, the father, the children, and therefore for the health of our greater society.”