In recent years, a small number of women have insisted on their rights to use public mikvas without the presence of a mikva attendant. 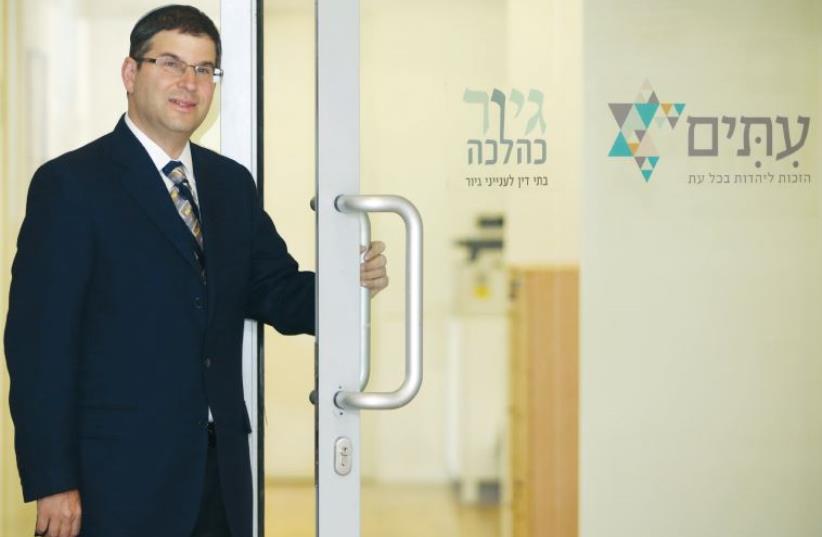 Rabbi Farber poses at ITIM.
(photo credit: MARC ISRAEL SELLEM & FACEBOOK)
Advertisement
NGOs and other activist groups praised on Thursday the position issued by the State Attorney’s Office that women must be allowed to immerse unaccompanied in public mikvaot, or ritual baths.The new policy was issued Wednesday in response to a 2015 petition filed to the High Court of Justice by ITIM, a religious services and lobbying group. The petition, filed on behalf of 13 women, claimed the state was infringing on their rights to religious freedom, privacy and autonomy.The State Attorney’s Office – speaking on behalf of the Chief Rabbinate and the Religious Services Ministry – told the court Wednesday that the Chief Rabbinate continues to insist a mikve attendant is required in Jewish law and signs should be placed in public mikvaot notifying users of this position.It added, however, that following meetings between representatives of the Chief Rabbinate and the ministry with the attorney-general, it was made clear there were “not inconsiderable legal difficulties to condition immersion in mikvaot on the presence of an attendant.”Therefore, the state wrote, women must be allowed to decide on the presence of an attendant and local religious councils, which operate the mikvaot, can not insist otherwise.The Religious Services Ministry must explain this new policy to local religious councils and mikve attendants, the state noted.Following the decision, the Chief Rabbinate issued a statement saying the state’s response was simply the legal position of the State Attorney’s Office.“The Chief Rabbinate has not changed its position and will not change its position...which was reiterated during the last meeting of the Council of the Chief Rabbinate, that immersion needs to be done in the presence of a mikve attendant, but has also provided solutions that respect the privacy of the women,” the statement read. “As long as a woman choses to immerse not in accordance with the principles of Jewish law, she can immerse in a swimming pool as well, which is also a futile immersion.”ITIM director Rabbi Seth Farber welcomed the state’s position and criticized the Chief Rabbinate for its response.“This statement was not only rude but it is incorrect from a halachic perspective,” Farber told The Jerusalem Post.“Both rabbis Ovadia Yosef and Mordechai Eliyahu, two rabbis who no one would question their credentials, ruled that in certain circumstances women can with immerse without the presence of an attendant.But instead of respecting people’s rights, the rabbinate still wants to trample on them.”Rabbi David Stav, chairman of the Tzohar rabbinical association, welcomed the new situation, though he agreed it is preferable for an attendant to be present during an immersion.He also criticized the Chief Rabbinate’s response to the new policy.“On a basic halachic level there is no disputing the rabbinate’s position that it is fitting for a woman to be there when a fellow woman is going into the mikve,” said Stav. “At the same time, immersion without the attendant should also be viewed as commendable and not to be slighted.The statement therefore attributed to the rabbinate equating immersion without an attendant to immersion in a swimming pool is a slight that borders on ignorance and stupidity. It is almost inconceivable that a rabbi would say such a thing, because in our generation it is critical rabbinical leaders realize that it is impossible to push religious observance on the general public. Rather, religious observance – for men and women alike – will only be achieved through a position of respect and love.”Roni Hazon Weiss, head of the Immersion in Quiet organization, welcomed the state’s response, saying it would now allow women to fulfill the religious requirement “in her own manner and with love.”The issue of immersing unattended had become increasingly heated in recent years, as activists and the religious establishment staked out their sides.Over the past few years, a small number of women began insisting they be allowed to use public mikvaot without the presence of a mikve attendant, despite Jewish law stipulating that someone be present to ensure the immersion was valid.According to Halacha, married women must immerse in a mikve once a month, at the completion of their menstrual cycle, before resuming marital relations.In recent years, ITIM took up the issue, gathering reports from women who said they felt vulnerable and uncomfortable needing to be naked in front of a mikve attendant, a relative stranger.Some women who spoke to ITIM said they had been victims of sexual abuse and needing to be unclothed in front of someone they didn’t know was psychologically traumatic.In 2014, the Chief Rabbinate and the Religious Services Ministry relaxed the regulations, ending mandated bodily examinations by mikve attendants. At the time they said they could not sanction unsupervised immersions because they would not be valid in Jewish law.The Chief Rabbinate says it has allowed for other solutions to the attendant problem, where a woman could wear a loose-fitting cloak or use a bell to alert the attendant once she is already in the water.These solutions, however, were deemed by activists to still infringe on the privacy of some women. There were also reports that these options were not always made available to immersing women.