After U.S. prod, ex-envoy to China says Haifa Port deal must be reversed

The Chinese management of the port was one of the issues that US National Security adviser John Bolton discussed with Prime Minister Benjamin Netanyahu during his visit here this week. 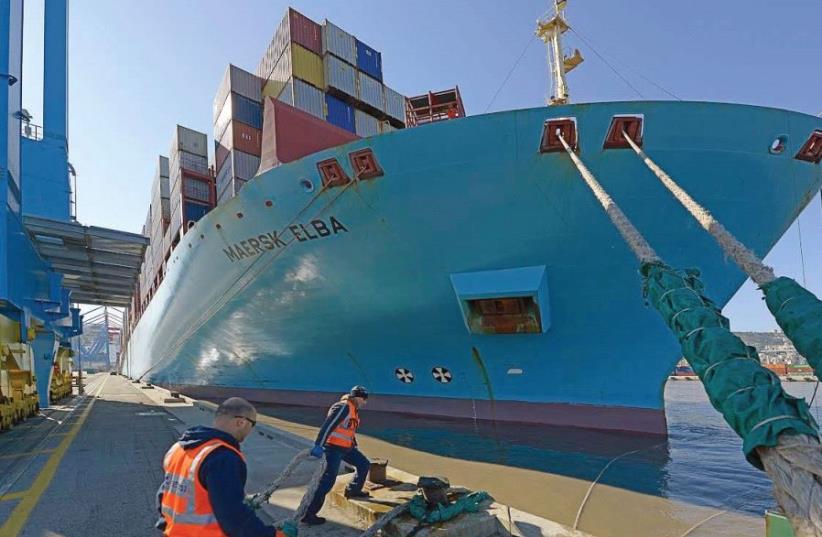 The ‘Maersk Elba’ docks at Haifa Port
(photo credit: WARHAFTIG VENIZIAN)
Advertisement
Israel should rethink and reverse its decision to let a Chinese firm manage the Haifa Port for 25 years because a national security asset should never be in the hands of a foreign country, Matan Vilna’i, Israel’s former ambassador to China and an ex-deputy defense minister, told The Jerusalem Post.“We need to rethink the whole deal and see how to go in reverse and move everything backwards,” said Vilna’i, who served as Israel’s envoy in China from 2012 to 2016. Vilna’i called the deal “crazy” in an interview on Tuesday, and said he did not know what scuttling it now would mean legally, but that there are apparatuses that “know how to deal with this.”The Chinese management of the port was one of the issues that US National Security adviser John Bolton discussed with Prime Minister Benjamin Netanyahu during his visit here this week. The port is a frequent dock for the US Sixth Fleet, and Washington is concerned that China will use the port to improve its standing in the Middle East and potentially gather intelligence on US interests.The Post reported last month that the US Navy might change its longstanding operations there once the Shanghai International Port Group (SIPG) – a company in which the Chinese government has a majority stake – takes over management of the site in 2021. Israel signed an agreement in 2015 with SIPG to upgrade and manage the port.Vilna’i, who was ambassador at the time when the deal was signed and whose rich IDF experience also includes a stint as deputy chief of staff, said nobody talked to him about the deal.“They did not speak to me about this. I read about it in the newspaper,” he said. “I said to myself, ‘they are crazy – why didn’t they talk to me about this?’”Vilna’i said that it is completely acceptable for Israel to deal with the Chinese on infrastructure projects because of their expertise. For instance, he said that the problems currently plaguing the Jerusalem-Tel Aviv train line probably would never have happened had the Chinese handled the project.“There is no doubt that we need to deal with the Chinese on infrastructure, up to the point where there are Israeli security interests involved – and the classic example of this is the Haifa Port, because it is a national security asset,” he said.“It is crazy for the Chinese to manage an Israeli national security asset. It would be the same if it were an American firm, by the way, not just Chinese,” he said. “A foreign country cannot manage an Israeli strategic asset.”Vilna’i said that when he first read about the plan, “I thought it was mistake.” The fact it was not a mistake, but rather something that entailed foresight, preparatory work and even a committee set up to deal with the issue, makes the decision “even graver,” he argued. Vilna’i said he predicted soon after hearing about the plan that, because of security issues, the US Sixth Fleet would stop docking in Haifa.Although a unit was set up by the Defense Ministry to oversee weapons sales, following the Phalcon debacle in 2000 when the US nixed a multi-billion dollar Israeli deal to sell surveillance planes to China, Vilna’i said that division did not look at the security ramifications of the Haifa Port deal.Asked whether he spoke of this matter with Prime Minister Benjamin Netanyahu, Vilna’i said that it came up in one of their meetings when he was completing his tenure in Beijing in 2016. But by then, he said, the deal was already signed, and it was “spilled milk.”
Vilna’i’ did not remember how Netanyahu responded at the time. He did, say, however that Netanyahu is “very sensitive” to Israel-Chinese ties, and “acts toward that country in the proper manner.”He said there would be “nothing easier” than to blame Netanyahu for the port decision, but that there were some 20 lower-level officials “along the way whose responsibility this is. Not everything is brought to the prime minister – this is what they get paid for.”Vilna’i said a team of experts needs to be set up, preferably in the National Security Council, to concentrate on the triangular ties between Israel, China and the US.“We are important for them [China], because they see us as a bridge to America,” he said, explaining that as a result of the special relationship between Israel and the US the Chinese “are convinced that we can influence inside the US on things that will serve China.”He said this goes beyond political influence in Washington, adding “they believe they can be helped by us in America.”Vilna’i said the current tensions between the US and China – which he stressed he views as a bad thing – can actually be to Israeli’s benefit because it makes Israel more important in Beijing’s eyes. Vilna’i said that Israel should not distance Itself from China because of this tension, adding that “we have to strike the right balance, and always remember that the US-Israel relationship is more important than anything else.”Vilna’i said that he was not well enough acquainted with the details of the Haifa Port deal to be able to gage how reversing it would affect Israel-Chinese ties, but that to do so would obviously be “problematic.”But, he added, “we have dealt with problematic things in the past, not only with simple things.”•
Advertisement
Subscribe for our daily newsletter