Religious Services Minister David Azoulay, 63, said his resignation is meant to prevent any disruption of parliamentary activity, as he undergoes medical care for cancer in the coming weeks. 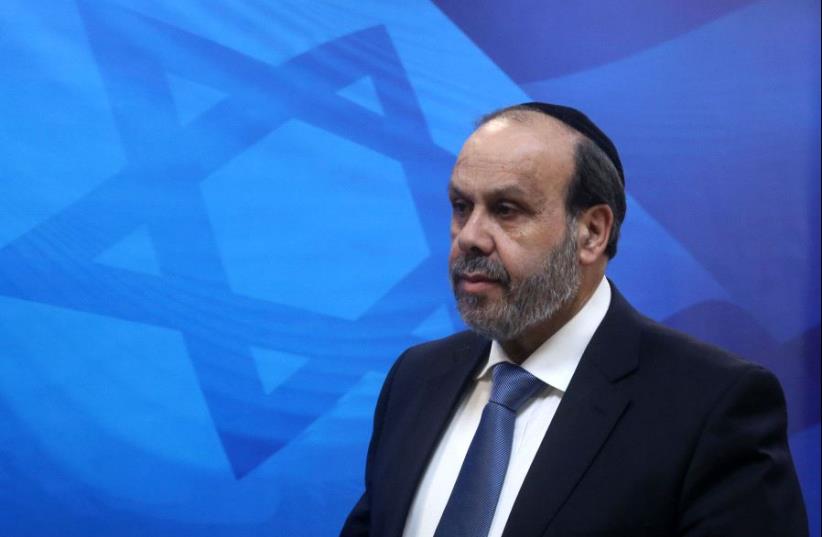 David Azoulay
(photo credit: MARC ISRAEL SELLEM/THE JERUSALEM POST)
Advertisement
Religious Services Minister David Azoulay resigned from the Knesset on Monday, but retained his cabinet portfolio.Azoulay, 63, said his resignation is meant to prevent any disruption of parliamentary activity, as he undergoes medical care for cancer in the coming weeks.The minister said he plans to “continue to lead the Religious Services Ministry, with God’s help, until the end of the term, with the blessing of the Council of Torah Sages.”When his resignation goes into effect on Wednesday, Azoulay will be replaced in the Knesset by his son, Yinon Azoulay.The four men preceding the younger Azoulay on Shas’s candidates list already resigned in January, when Interior Minister Arye Deri pressured Azoulay to quit. Deri hatched the plan to have Azoulay’s son replace him, and leaked to the press that the minister is quitting the Knesset even though he did not agree to Deri’s plan. At the time, Azoulay’s hospitalization prevented the coalition from attaining a majority for a haredi-backed bill to prevent more businesses from opening on Shabbat.Despite what happened in January, Deri said that he was to receive Azoulay’s resignation message.“Rabbi Azoulay has had many parliamentary achievements, as a veteran MK from Shas and past chairman of the Knesset Interior Committee,” Deri stated. “His place in the Knesset will be filled by his son, Yinon Azoulay, a dedicated and energetic representative who has years of experience in municipal and social issues.”Deri added: “We are all praying for [Azoulay’s] full and speedy recovery and his return to full activity.”Azoulay’s resignation falls under the “mini-Norwegian law,” which allows one minister or deputy minister per party to resign from the Knesset but return if he or she is fired from the cabinet.