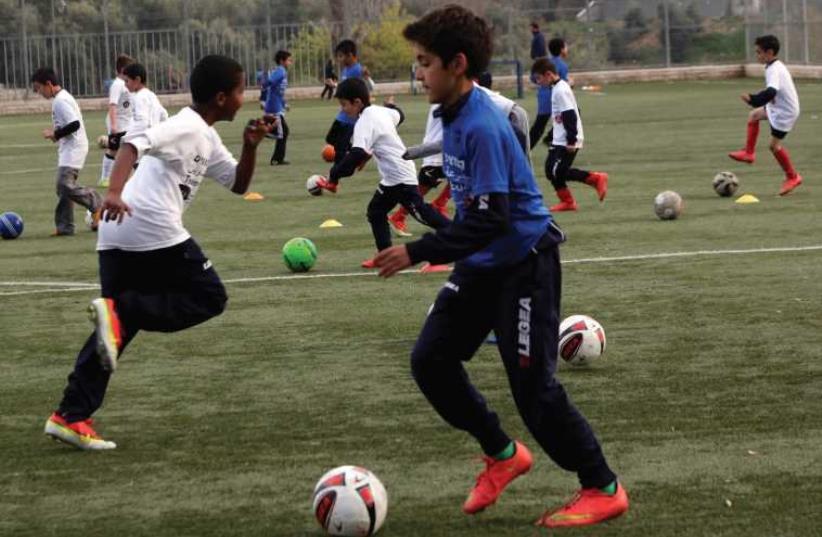 Children playing soccer (file)
(photo credit: COURTESY NEW ISRAEL FUND)
Advertisement
Members of the Ethiopian- Israeli community in Rehovot on Monday retracted last week’s harsh accusations that a camp in the city had instituted racist policies and segregated their children from the rest of the campers.On Monday of last week, Ethiopian-Israeli parents in the city’s Kiryat Moshe neighborhood accused Havayot Rehovot, the municipal summer camp provider for preschoolers, of acquiescing to demands by parents from the nearby wealthier neighborhood of Green Rehovot to keep the Ethiopian Israeli children in separate camps.They further alleged that the parents from the wealthier neighborhood had asked to have their camp hosted by the community center in Kiryat Moshe so they could benefit from the cheaper prices in the neighborhood.Members of the Ethiopian- Israeli community in Kiryat Moshe present at a Knesset Immigration, Absorption and Diaspora Committee meeting on Monday, however, said the decision was not made on the basis of skin color, but rather socioeconomic background.“We discovered with the opening of the camp that residents of Green Rehovot requested groups separate from [children of] the Kiryat Moshe neighborhood. [But] skin color did not matter to them and this is not about racism, rather they didn’t want to mix children from disadvantaged neighborhoods such as Kiryat Moshe with children from an established neighborhood such as Green Rehovot,” Argo Tasame, a resident of the Kiryat Moshe neighborhood said at the meeting.Adi Deutsch, manager of the Hayavot Rehovot community centers, said he had no knowledge of requests to segregate Ethiopian-Israeli children from others.All the camps, he said, are run as extensions of preschool classes, and the decision to run the camps in the community center rather than the preschool complexes scattered around the city was a decision made by the company to ensure integration between the different children rather than segregation.The community center used for the camp serves both neighborhoods year round, he said. Some 400 children participate in the camps which have 17 counselors from the Ethiopian community, according to Deutsch, who said events at the camp are all integrated.“The representatives of the community centers and the Education Ministry have certainly explained the affair, said MK Sofa Landver (Yisrael Beytenu).“This isn’t about rich versus poor when young couples and the middle class live in Green Rehovot. This is a good, hardworking and talented mayor and there is no racism there.”