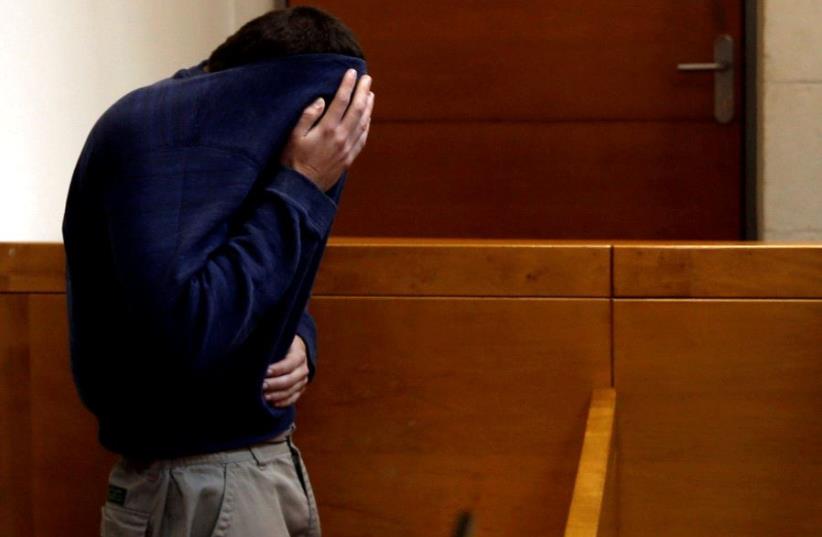 An US-Israeli teen who was arrested in Israel on suspicion of making bomb threats against Jewish community centers in the United States, Australia and New Zealand is seen at a remand hearing at Magistrate's Court in Rishon Lezion, Israel on March 23, 2017
(photo credit: REUTERS)
Advertisement
An American-Israeli teen from Ashkelon, responsible for making 2,000 bomb threats, spreading fear among Jewish institutions, airports and police stations in the United States and other countries, has been found guilty of extortion by threat, sending fraudulent messages and more.The 19-year-old dual citizen, coined the “JCC hoax bomber,” was convicted by the Tel Aviv District Court for crimes committed when he was an adult, with no action yet taken regarding threats made while still a minor.He was convicted of extortion by threat, sending fraudulent messages, conspiring to commit crimes, penetration of computer material, money laundering, attacking a policeman, unlawfully carrying a weapon and other offenses.The teenager's name remains under gag order because he was a minor when many of the crimes were committed from 2014 until his arrest in March 2017.Targets of threats included Jewish community centers, schools, airports, shopping malls, hospitals, police stations, the Israel Embassy in the United States, an American senator and a range of public buildings in the US and other countries including Australia and New Zealand.The teenager also used the Alpha- Bay website, an online “dark net” market, to offer to send threats to a range of targets in return for payment.Threatening a massacre in a private home would cost $40, a school massacre threat would cost $80 and a plane bomb threat would cost $500. The teenager promised to send recordings of the threats and a threat made against a school would only be considered successful if it resulted in an evacuation and an emergency response by emergency services.When asked to explain his actions, the teenager told psychiatrists that he made the threats to avoid being bored."I did it out of boredom; it was like a game. I understand that it is forbidden.I am sorry, I won't do it again," he said.The court explained the great lengths that the teenager went to in order to hide the origins of his phone calls and his voice, including purchasing long-range antennas and connecting to external Internet infrastructures to conceal his location.The teenager cannot be convicted by the court for threats made while he was still a minor, from 2014 until August 2016, until the court receives expert opinion relating to the accused. Although the court held that he was responsible for actions committed during that time, it must wait to hear from an appointed youth probation officer, under the auspices of the Labor and Social Services Ministry.In February, The Jerusalem Post learned that the US backed away from seeking extradition of the teenager but may seek to have him extradited and tried in the US after facing trial in Israel.In April 2017, the Post confirmed that the Israeli Justice Ministry initially rejected an informal request by the US to extradite the defendant for trial in the US in the Jewish Community Center bomb-threat case.Following the conviction, the state prosecution’s cyber division emphasized the disruption caused to many people by the teenager’s threats.“The court accepted our position and held that the accused was fit to stand trial and was responsible for his actions,” said attorney Yoni Hadad.“The court convicted the accused for crimes committed as an adult and sent the accused for expert evaluation regarding acts carried out as a minor.”Threats made by the teenager “caused panic and fear, in a methodical and sophisticated way, while hiding his actions and disrupting the lives of many people who he threatened,” said Hadad.The family of the Ashkelon teenager previously tried to defend his actions by citing physical and mental incompetence due to illness but the court held that he was fit to stand trial and that he understood the severity of his actions despite being on the autism spectrum.In April, while awaiting trial, the teenager was arrested on suspicion of making a further 100 threatening calls from inside prison.Two calls made to Israel Police warning of suspicious items in Tel Aviv and the nearby town of Kfar Saba were traced back to the teenager at the Nitzan prison in the central Israel town of Ramle.Yonah Jeremy Bob contributed to this report.