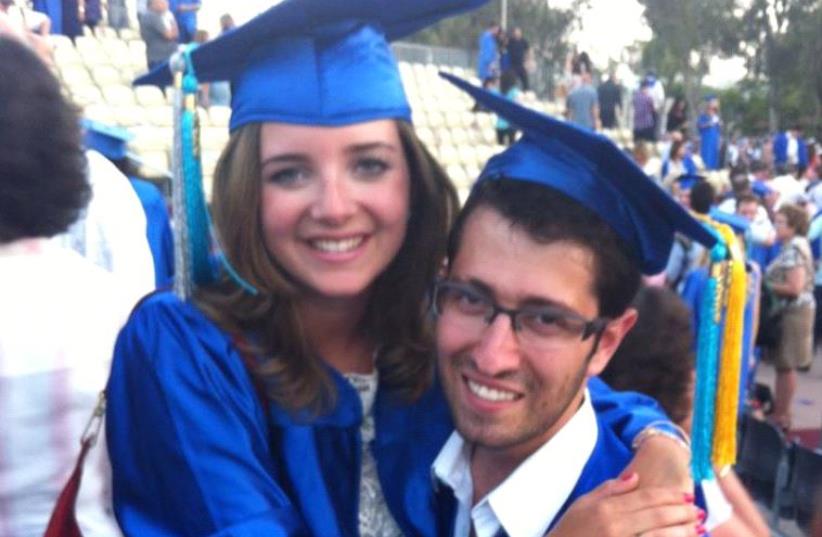 Tamara Adissi and Ricardo Adissi
(photo credit: Courtesy)
Advertisement
It’s a classic Israeli love story about two very different worlds coming together through a mutual Zionist dream.As Tu Be’av (Judaism’s equivalent of Valentine’s Day) arrives Friday, Tamara Adissi on Wednesday recalled how she found her bashert (soulmate) after making aliya to live and study at the Raphael Recanati International School (RRIS), at the Interdisciplinary Center (IDC) – Herzliya.Adissi, a 26-year-old Zionist, whose maiden name is Hirsch, made aliya from Vienna in 2008 at the age of 18, to honor the country she loves, while studying communications and media at the university.“I wanted to come to Israel because of Zionism,” said Adissi. “I really wanted to come here, to live here and experience the life of a person coming from abroad.”Two weeks after beginning classes at RRIS, Tamara said she experienced love at first sight when she laid eyes on fellow student, Ricardo Adissi, 29, who made aliya for similar reasons from San Paolo a couple years earlier.“We both started school at the same time, and first saw each other at a student gathering in a restaurant,” recalled Tamara. “I sat in front of him, and we started chatting – and I immediately thought, wow, this guy is actually really cute.”The feeling was mutual, and Ricardo asked her out that night. And despite being from wildly different cultures, resulting in a potentially ruinous first date, in short order, the couple fell in love.“As we got to know each other, we had to adapt ourselves to each other’s cultures,” she said. “He’s from San Paulo, where everything is really slow, easy and relaxed; and I’m from Vienna, where everything is on time. And when we had our first date I was ready at 6 p.m. and he came at like 10 p.m.”“So, I had to educate him about being on time, and that he has to be serious,” Tamara added with a laugh. “Since then, he always comes earlier than I do.”The couple decided to get married in February of 2014, one year after graduating and securing steady jobs.This Friday, as they celebrate Tu Be’av, Tamara said she will remain indebted to the university for helping her find the love of her life.“IDC definitely made our paths cross, and I couldn’t have imagined meeting him another way,” she said. “It’s like magic happened. It’s really amazing.”Staying true to their mutual love for Israel, the couple decided to remain in the country; they now reside in Ra’anana.“We decided to stay here to build our family,” she said.RRIS at IDC Herzliya is constituted of over 1,800 undergraduate and graduate students from 86 countries, representing a third of the student population at the university.According to the university, hundreds of couples have met and married after studying at RRIS, and approximately 70 percent make aliya.