Elor Azaria acted against the army's guiding principles and therefore he was justly punished. 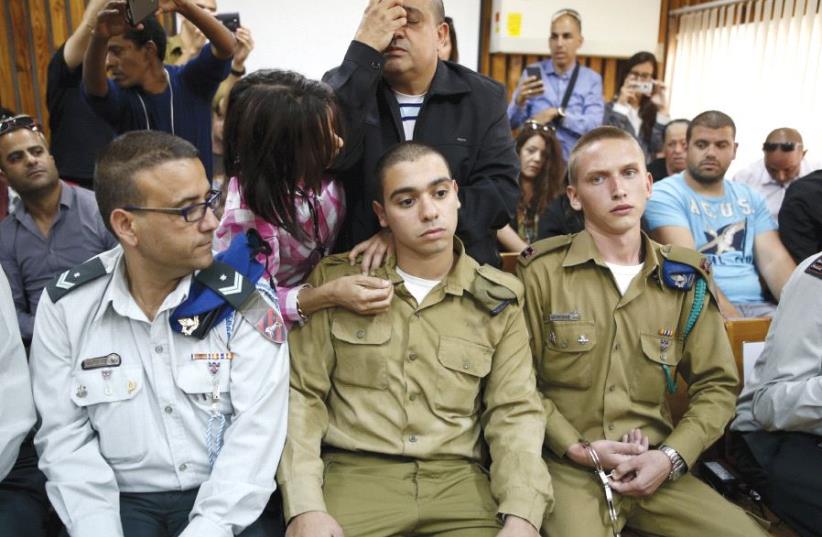 THE FATHER of convicted Sgt. Elor Azaria (center) prays behind him in a military court during a remand hearing for his case last March
(photo credit: REUTERS)
Advertisement
The most important thing is that, after nearly a year of the never-ending Elor Azaria saga, we finally have a sentence. And perhaps, it can be hoped, the affair is now behind us.
Tensions running high shortly before verdict in Hebron shooting case given to Elor Azaria (credit: REUTERS)
However, this could be a false hope, considering that his attorneys suggest an appeal is in the offing.It began as a serious, but small and local incident, that became – for a bleeding and divided nation – a cosmic event. This came about with the help of cynical right-wing politicians – Avigdor Liberman, Oren Hazan, Miri Regev, Naftali Bennett and others – who were interested only in tracking down more supporters in the political hunting grounds and maintaining their hold on power.It happened because of a family whose ideology is anchored in the radical and racist Right of Meir Kahane and Betar Jerusalem’s extremist fan group, La Familia. The family became a tool of the politicians and fell in love with playing the role of the victim, which also gave them unprecedented attention. The event also became magnified, perhaps to the greatest extent, because of media outlets that were thirsty for ratings and expected us to hold our breath for the sentencing.A former officer told me after the sentencing that he was in a similar situation 40 years ago when he was charged with murdering a wounded terrorist in enemy territory.“My parents did not raise a howl and were not even in the courtroom,” he recalled. “My friends from my military unit were not allowed to sing my praises.”After he was acquitted due to the testimony of a senior officer, who said that he acted in accordance with the rules of engagement, “there was no celebrating or clapping in the courtroom and the politicians didn’t say anything.”That is how people behaved once upon a time. However, Israel is no longer the country it once was. Principles and behavioral norms that were crystal clear are fading away. And what should be clear to any intelligent person is becoming less and less understood to more and more people.The Right turned Elor Azaria into a hero. However, he is the diametric opposite of this. He is a coward and a contemptible soldier. A good soldier does not fire at a helpless, unarmed person who is bleeding to death, even if it is a terrorist who just carried out an attack.Elor Azaria deserved to be punished. He was unlucky that his coldblooded murder – or hotblooded murder as it were – was caught on video.Otherwise, it is doubtful that he would have been put on trial. It may be assumed that, in the typical IDF soldier’s experience, there were previous instances that were not given the time of day by the IDF or the authorities.The 18-month sentence given to Azaria by the court is reasonable. And, in fact, it would not matter if he had received a lighter or more severe sentence. What matters is that he was punished and the message the sentence sends. The message is that the supreme command in the IDF believes that soldiers must comport themselves in a cool-headed manner, in accordance with their commanders’ orders, according to the rules of engagement and in the spirit of ethical warfare.This approach is embodied by the courageous IDF Chief of Staff Lt.-Gen. Gadi Eisenkot, who is attempting to protect the IDF from the bad winds blowing in Israel that are aiming to force the army in their direction. Without the unwavering moral behavior of Eisenkot and the General Staff, as former defense minister Moshe Ya’alon once said, the IDF is liable to turn into a collection of lawless militias and, if I may add, into groups of gangland murderers. Azaria acted in opposition to all of these principles and values, and therefore he was justly punished.