Analysis: Azaria would have remained anonymous if not for viral video

“The fact that in 55 incidents no criminal investigation was considered necessary raises doubts about the implementation of Israel’s declared policy on investigating civilian fatalities.” 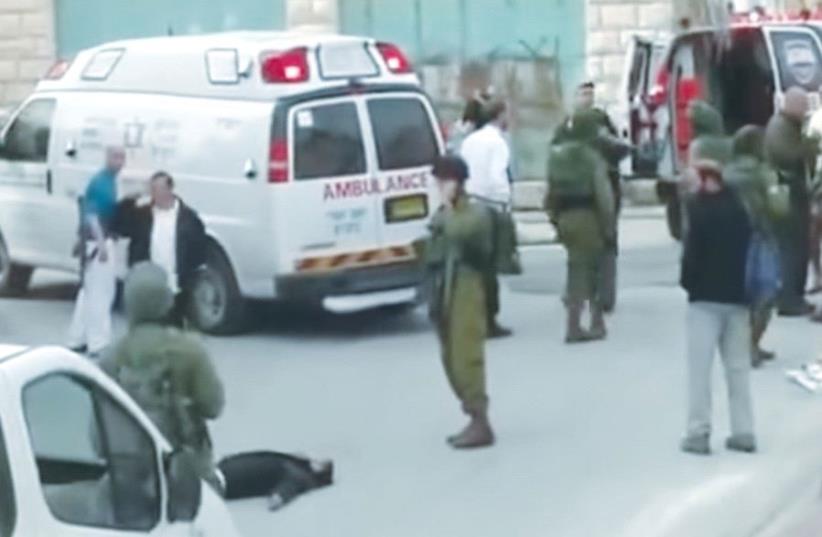 A STILL PHOTO from the famous video shows Sgt. Elor Azaria shooting an incapacitated terrorist in Hebron on March 24, 2016.
(photo credit: B'TSELEM)
Advertisement
It was the viral video that landed an IDF soldier behind bars for manslaughter.Last March, IDF medic Sgt. Elor Azaria was caught on film firing a bullet into the head of Abed al-Fattah al-Sharif, a 21-year-old Palestinian terrorist, as he lay wounded on the ground in the West Bank city of Hebron.
IDF soldier shoots dead subdued Palestinian terrorist in Hebron, part of Elor Azaria case
While the shot fired by Azaria and his subsequent trial has reverberated in Israel and the world, he is not the first IDF soldier to be charged with manslaughter. He was the first IDF soldier to be convicted of manslaughter in 12 years, after Taysir Heib, a Beduin soldier, was sentenced to eight years in prison for killing British citizen Tom Hurndall in the southern Gaza Strip in 2005.In January, three military judges ruled that Azaria “opened fire in violation of orders. The terrorist [Sharif] did not pose any threat.” So what made this trial so different? Azaria’s case exemplifies the growing use of technology, especially of social networking sites, by those seeking to document conflict.Twelve years ago, when Heib shot Hurndall, social media sites were just getting off the ground. Facebook was one year old, Youtube had just launched and Twitter would not be around for another year.By the fall of 2015, when a wave of violence erupted in the West Bank and Israel, characterized by stabbings and car-ramming attacks on Israelis by Palestinians, these sites had matured, with millions of users sharing and viewing their content at every moment across the globe.The shooting – captured on video by Emad abu-Shamsiyah, a Hebron Arab resident wielding a camera provided by the Israeli human rights organization B’Tselem – went viral, and the public uproar it sparked made it impossible to ignore.According to B’Tselem spokesman Amit Gilutz, the camera distribution project began in 2007 and has hundreds of volunteers in the West Bank and Gaza who document their everyday lives and interactions with IDF soldiers.It “shows the power of this kind of footage, of these kinds of images,” Gilutz told The Jerusalem Post, adding that “it makes it clear for people what the lives of Palestinians are like under a military occupation.”According to several polls, there was widespread public support for Azaria, who saw him as a victim, as “everyone’s son” and on trial only because of his bad luck of being caught on film doing what IDF soldiers are trained to do, preventing those who wish to harm Israeli citizens, even if it means to kill them. But many others, including then defense minister Moshe Yaalon and IDF Chief of Staff Lt.- Gen. Gadi Eisenkot, condemned Azaria’s deed.It is IDF policy to investigate every incident that results in the death of Palestinian civilians in the West Bank, but according to Human Rights Group Yesh Din, which issued a report a day before the guilty verdict was handed down to Azaria, of the 186 criminal investigations into suspected offenses against Palestinians by the IDF in 2015, only four yielded indictments.“The fact that in 55 incidents no criminal investigation was considered necessary raises doubts about the implementation of Israel’s declared policy on investigating civilian fatalities,” the Yesh Din report said, adding that the data signaled an “inability and unwillingness” to address suspected unlawful conduct by IDF soldiers in the West Bank or Gaza Strip.According to figures released by B’Tselem, 99 Palestinians were shot and killed by IDF troops in the West Bank in 2015, yet only 21 investigations were opened. In a June press release by B’Tselem, the group stated that “since the most recent wave of violence began in October 2015, a good number of instances were caught on video showing executions of Palestinians who stabbed or were suspected of stabbing Israeli security personnel or civilians.”While many of the alleged executions of Palestinians were captured on security cameras installed by the IDF throughout the West Bank, the human rights group accuses the army of “taking pains not to make them public” as well as accusing the military’s investigating authorities of ignoring them “as a rule.”“There have been many reports since October of a policy permitting shoot-to-kill in incidents in which Palestinians harmed, or attempted to harm, Israeli security personnel or civilians, even when there is no clear and immediate mortal danger or if the danger can be overcome without resorting to a lethal outcome. Nevertheless, to date, these cases are hardly ever investigated, and no civilian or member of the security forces has faced charged for implementing his policy.”Al-Sharif was far from the first and is far from the last Palestinian to be killed following a stabbing or attempted stabbing in the West Bank. But it is certain that without the footage captured by abu-Shamsiyah, which went viral both in Israel and around the world, Azaria would have remained unknown.Less than an hour after Azaria shot Sharif, his superior officers had informed IDF Central Command of the incident and an investigation into it was already under way by midday. It was only later that the video came out, turning a case that would have otherwise remained quiet into a full blown crisis for the army. With an investigation into the shooting under way, Azaria was arrested and initially faced a charge of murder.He would have likely been tried in a military court and might have been sentenced to prison, but without the public and political rift which became so apparent and which has dramatically widened and transfixed Israeli society. But with a viral video and a growingly polarizing atmosphere, the army could no longer keep the lid on the case and a full-fledged public trial was unavoidable.