Analysis: Doom and gloom – or a note of optimism for Israel's future?

At Jerusalem Post Conference in New York, ministers, MKs, diplomats and Jewish leaders – with one exception – portray a dark future for Israel. 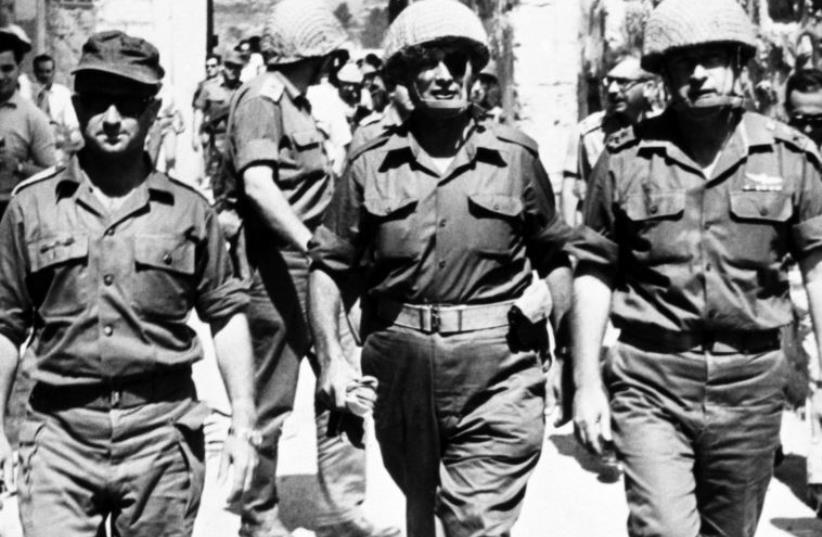 Photo taken in June 1967 in Jerusalem shows the chief-of-staff of the Israeli army, Yitzhak Rabin (R), Defense Minister Moshe Dayan (C), and GOC Central Command Uzi Narkiss during the Six-Day War
(photo credit: AFP PHOTO)
Advertisement
NEW YORK – It is said that the late prime minister Levi Eshkol, who excelled in Yiddish jokes, described Israel in the 1960s as “Shimshon der nebedecher” – the poor, weak and pathetic Samson.This is, of course, a contradiction in terms for biblical history’s most famous strongman.This metaphor came to mind listening to Israeli cabinet ministers, MKs, diplomats and American Jewish leaders at Sunday’s Jerusalem Post Conference in New York as they depicted a very gloomy and dark portrayal of Israel and the challenges it faces.Cries of “gewald,” accusations of anti-Semitism, depiction of BDS as a larger-than-life monster threatening Israel and fears of terrorist threats were all over the place.It was refreshing, though, to hear former Mossad chief Ephraim Halevy trying to bring the audience back to ground with his reality check.Israel, he said during the lively discussion on the panel about the threat of Muslim terrorism, is “indestructible.”Israel’s enemies, he stressed, are not posing an existential threat against the Jewish state, and he repeated the call he has been advocating for a long time to open a dialogue with Hamas, and surprised the conference by saying he wouldn’t be surprised at all if the presumptive new defense minister, Avigdor Liberman, talks with the Islamist movement of Gaza.If there is any danger to the future of Israel, according to Halevy, it derives from demographic and religious problems, as well as social divisions inside society. He’s right.Unlike in politics, where perceptions are in the eyes of the beholder, when it comes to security matters, the facts are usually solid and hard to dispute. Here is a genuine tour d’horizon of Israel’s security posture.There is tranquility and quiet on all of Israel’s borders.In the North on the Lebanese border, which will soon mark the tenth anniversary of the 2006 Second Lebanon War, Hezbollah is deterred.True, it has since accumulated a huge arsenal of rockets and missiles – some of them long range and more accurate and capable of hitting almost any strategic and military site in Israel. The Shi’ite Lebanese movement also has gained impressive experience in battle tactics and improved the military skill of its combatants, but they are bogged down in the killing fields of Syria’s civil war, which is entering its sixth year. The result is that Galilee residents are enjoying the longest period of peace in between Israel’s border wars.Not far from there in the Golan Heights, peace is also being maintained.Despite the presence of al-Qaida and Islamic State terrorists on the Syria side of the Golan, they have learned to live in co-existence with their Israeli neighbors – not, however, because the terrorists changed their ideology or softened their hatred toward Jews and Israelis.Like Hezbollah, they are preoccupied fighting other enemies more important to them and are deterred knowing that Israel would harshly retaliate and punish them if they dared attack the Golan Heights.To the east, Israeli-Jordanian relations have never been better, with improved security ties and intelligence cooperation. So is the reality in the South on the Egyptian-Israeli border of the Sinai Peninsula. The intelligence communities and militaries of the two countries cooperate in the war against the terrorists in Sinai who have pledged allegiance to Islamic State. Cairo and Jerusalem also see eye to eye with regard to how to deal with Hamas in Gaza.As does Hezbollah in the North, Hamas in the South is trying to arm itself and prepare for the next round. But so is Israel. Its capabilities to detect and expose underground tunnels leading from Gaza into Israel are much better than the last war nearly two years ago.Hamas, too, is deterred and its leaders declare time and again that they don’t wish to be dragged into another round of violence. If the economic matters are resolved – at the Post conference, Transportation and Intelligence Minister Yisrael Katz once again called for construction of a floating port for Gaza linked to land by a bridge – it is probable that peace on the Gaza border can be prolonged for many more years.Unlike in the past, Israel doesn’t face any threat or danger from Arab armies. This is because of the peace treaties with Egypt and Jordan, and because Iraq, Syria and even remote Libya have disintegrated as national and territorial entities preoccupied with fights for their own survival, and their armies have either evaporated or are weakened.Iran, which has a strong military force and missiles capable of reaching Israel, has signed a nuclear deal with the West that pushed it back years from being able to assemble a nuclear bomb. Iran also now has more pressing problems and challenges – economic reinvigoration, wars in Syria and Yemen – than Israel.At the same time, Iran’s Sunni Arab enemies have turned to Israel, which is reaching out with secret military and intelligence deals worth hundreds of millions of dollars to Saudi Arabia and the United Arab Emirates.Above all, Israel remains the only power in the region with a nuclear monopoly, the strongest army and the best intelligence and air force.No wonder it is the strongest power in the Middle East. Israel is a modern-day Samson. Period.