Chance of agreement being destroyed by Balad and the Islamic Movement. 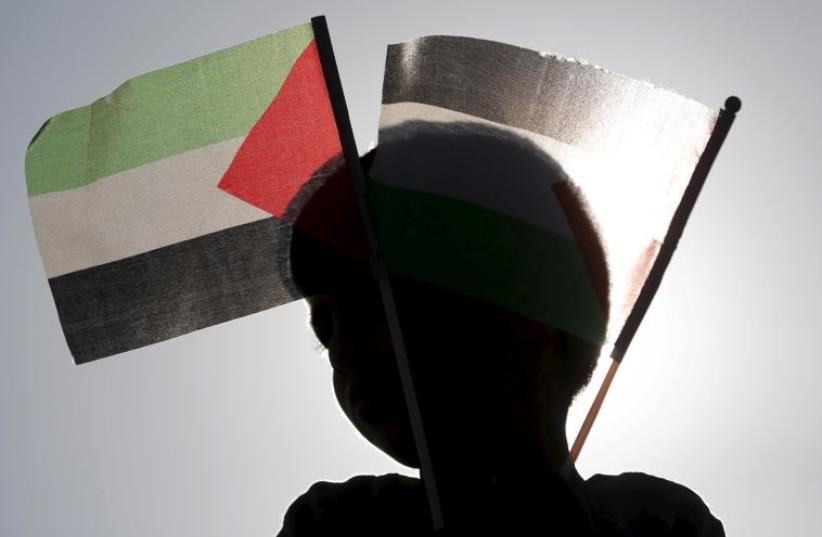 A Beduin boy holds Palestinian flags as he takes part in a rally marking Land Day in Umm el-Hiran
(photo credit: REUTERS)
Advertisement
The hostility and harsh rhetoric by Arab Israeli leaders toward the government demonstrates that on many issues a compromise is unlikely to be found.A few hundred apparently mostly Arab protesters from the North and other areas arrived at the unrecognized illegal Beduin settlement of Umm al-Hiran in the Negev on Wednesday to protest on Land Day, wave Palestinian flags, and hear vigorous speeches by Arab politicians and leaders against the state and its leaders.“Destroying Umm al-Hiran would be a declaration of war against Arabs of the Negev,” Joint List MK Ahmad Tibi told The Jerusalem Post at the rally.Joint List MK and Balad head Jamal Zahalka told the Post that “if Israeli authorities try to expel the residents from the village there will be a confrontation and people will come from all over the country to defend it.”Zahalka emphasized that a stand has to be made in Umm al-Hiran since if it falls quietly, the government would move on to destroy other villages.Joint List MK Taleb Abu Arar was quoted by Channel 2 as saying in Umm al-Hiran that Israel was founded on “exploitation, racism and terrorism.”Other Land Day protests were held in the Galilee, in Sakhnin and Arrabe, where the events in 1976 that led to the annual Land Day commemorations took place, and where the main demonstrations are traditionally held.The Arab nationalist Balad Party, according to a knowledgeable source from the Arab sector, was one of the principal supporters of holding the main protest in the Negev. The Hadash party wanted it in the North.Balad has sought to emphasize the Beduin conflict with the government and turn it from a land dispute into a national conflict. Most of the protesters at the Land Day protest in Umm al-Hiran were non-Beduin Arabs from the North, and Palestinian flags, which are generally used by Beduin at demonstrations, were everywhere. This is a result of the infiltration of Balad’s nationalist ideology.Another party that has had success at infiltrating the Beduin sector is the banned Northern Branch of the Islamic Movement. The group’s leader, Raed Salah, was also present at the protest.Hillel Frisch, of Bar-Ilan University’s Begin-Sadat Center for Strategic Studies, explains in his book – Israel’s Security and its Arab Citizens – that when the Islamic Movement began its Beduin outreach in 1983 there were barely any mosques around. In 1998 there were already 46, all controlled by the movement.Since then, Arab nationalists and Islamists have been working for years to lure the Beduin into their respective camps, leaving the more reasonable common folk at the radicals’ mercy.A former government official who had worked on the Beduin issue in the past, and who wished not to be named, told the Post that any chance of an agreement is being destroyed by Balad and the Islamic Movement, who reject any negotiation.The Beduin are generally more “passive” and Balad and the Islamic Movement “control the political discussion,” said the source, adding that he does not know if an agreement to regulate Beduin settlements is possible.The Beduin, Arab MKs, and NGOs have stated repeatedly that the only solution for the illegal or unrecognized settlements in the Negev is to legalize them. They rejected completely the Prawer-Begin bill, which was an initiative seeking to regulate Beduin settlements and land-ownerships.The plan aimed for a compromise solution for tens of thousands of Beduin scattered in unrecognized villages throughout the Negev, legalizing 63 percent of claimed land.Beduin supporters opposed the bill, saying the legislation would result in up to 40,000 Beduin losing their land.Opponents on the Right criticized it as too generous, saying the state would be giving away land for free, land which the Beduin could not prove to be theirs.Amichai Yogev, southern director of the NGO Regavim – describing itself as seeking to ensure a responsible, legal and accountable use of the country’s land – told the Post that “Most Beduin are not concerned with this struggle against the state and the political leaders push them into it.”The Balad Party and the Islamic Movement “are conducting a struggle between Arabs and Jews and they want the Beduin on board, with the aim of beating the state,” argued Yogev. Many of the Beduin in the Negev understand that the land where they are settled does not legally belong to them, he asserted.Referring to the comment by Zahalka that the Arabs are making a stand in Umm al-Hiran, Yogev said that this is why the Arab leadership is investing so much in the struggle there.“When have you ever seen so many Arab leaders from the North make their way to a small settlement in the middle of nowhere in the Negev desert?”