Even Turkey will be hard pressed to present this accord as bringing Israel to its knees. 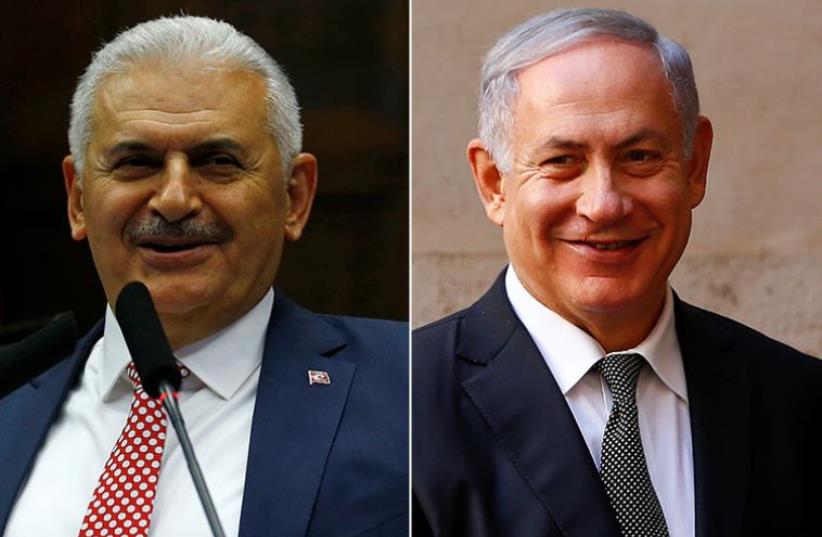 Netanyahu and Yildirim
(photo credit: REUTERS)
Advertisement
In 2013, after Prime Minister Benjamin Netanyahu phoned his Turkish colleague Recep Tayyip Erdogan and – at the urging of US President Barack Obama – apologized for “operational errors” in the Mavi Marmara incident, the Turks were anything but gracious.Indeed, billboards erected in Ankara at the time seemed designed to rub Israel’s nose in the apology: “Israel apologized to Turkey,” they exclaimed. “Dear prime minister [Erdogan], we are grateful that you let our country experience this pride.”The words were superimposed over pictures of a confident Erdogan and a tired, gloomy-looking Netanyahu. This was the Turkish version of Danny Ayalon seating the Turkish ambassador in a low stool when he called him into his office to protest anti-Semitic content on Turkish television in January 2010.Similar billboards are unlikely to dot the Ankara skyline on Tuesday, when the directors-general of the foreign ministries of both countries sign the rapprochement agreement.Even Turkey will be hard pressed to present this accord as bringing Israel to its knees.Immediately after the Mavi Marmara incident, the Turks presented two necessary conditions for reconciliation: a formal apology, and the payment of compensation to the families of those killed while trying to break Israel’s naval blockade of Gaza. Shortly afterward, Erdogan climbed even further up the tree, demanding a third condition: Israel would have to lift its naval blockade of Gaza.This demand was unrealistic from the get-go.The Palmer report put out by the UN declared that the blockade was legal, and it was unreasonable to really believe Israel would sacrifice its security considerations to meet a Turkish demand.Yet it was a demand that Erdogan made, one that must be seen in the context of the time – this was late 2010, and Erdogan was the darling of the Arab world.He then became an absolute hero in the Arab world for putting Israel “in its place,” first for demonstratively walking out on President Shimon Peres at Davos in 2009, then for extracting an apology from Ayalon for the low-couch incident, and then for expelling Israel’s envoy from Ankara after the Mavi Marmara.This was before the “Arab Spring” and the Syrian civil war. Erdogan was the new sultan.Hail Erdogan.This was an Erdogan so full of himself that he hinted he would send warships to accompany “aid” ships to Gaza to relieve the blockade (which never happened), an Erdogan who was going to show off to everyone and make a triumphant visit to Gaza in 2013 (also something that never happened).He repeated his demand to lift the blockade, or “siege,” as the Turks often call it, ever since.Even as late as April, his spokesman said there would be no deal without a lifting the blockade.But the blockade was not lifted, yet the deal will be signed.It will be signed because Turkey needs the deal as much, if not even more, than Israel. For years the negotiations were one-way, based on what Israel had to give Turkey: the apology, compensation, lifting the blockade. But as Turkey’s strategic situation worsened, as peace negotiations with the Kurdish PKK broke down, as the Syrian civil war went on and on, and as its relations with Egypt and with Russia deteriorated, it was no longer a country that could dictate terms.Into the breach stepped Israel, setting conditions of its own, the first being the closing of the Hamas office in Turkey.But neither country got everything it wanted.Israel did not get a Turkish commitment to evict Hamas, only a promise that the terrorist group will not plan or mount attacks against it from Turkish soil, or raise funds. And regardless of how they spin it, the Turks did not get their demands met either. Yes, they can bring in aid, and Turkish Prime Minister Binali Yıldırım can make the claim that Turkey is the protector of the Palestinians. But Erdogan did not get Israel to fundamentally change its Gaza policy, i.e., lifting the blockade.In the final analysis, the accord was signed because it is in the interest of both countries to cooperate where they can in keeping the region from collapsing, and because they could both point to elements in the accord as a victory.After six years, the deal was signed because the Middle East and Turkey’s standing have changed dramatically, and because an accord was drawn up with enough diplomatic ambiguity that each side could – as they did on Monday – present it as a victory of sorts.But claims of total victory, in either capital, are disingenuous.