While Germany and Israel mark 50 years of cooperation, Germany’s readiness to participate in anti-Israel demonization taking place in the UN and similar venues is a growing source of friction. 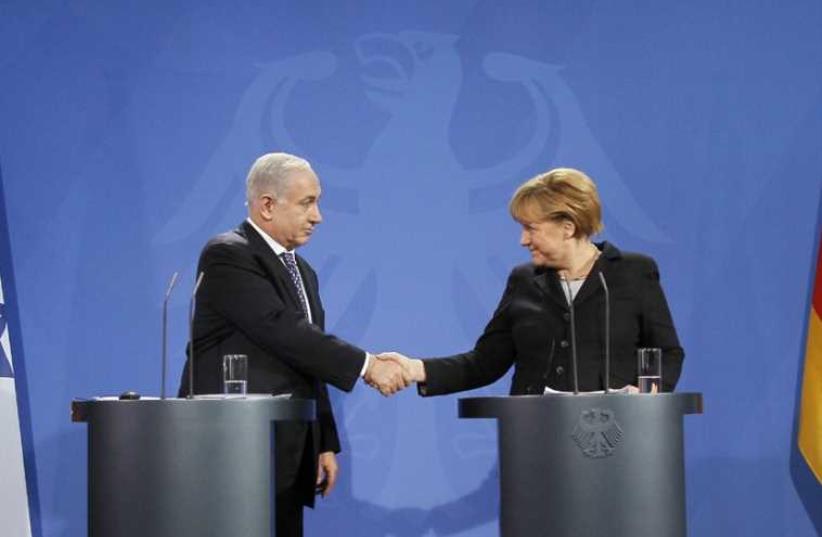 Netanyahu and Merkel
(photo credit: WOLFGANG RATTAY / REUTERS)
Advertisement
BERLIN – In a year full of celebrations marking 50 years of German-Israel diplomatic relations, diplomatic niceties were absent at last week’s UNHRC Gaza report vote in Geneva, where the Merkel administration condemned Israel for its military methods during Operation Protective Edge.Asked by The Jerusalem Post on Monday why Germany voted against Israel, a spokeswoman for the Foreign Ministry wrote, “Germany led intensive negotiations with EU states in the United Nations Human Rights Council over the draft of the resolution. Thereby important changes of the content of the resolution could be reached, for example, a restriction of the follow-ups to the report of the fact-finding commission.”The spokeswoman said the “Foreign Ministry stands in a close and constructive exchange with the Israeli Embassy.”However, the London Jewish Chronicle reported on Monday that “Benjamin Netanyahu’s office then began a series of phone calls to some of Israel’s key allies, including Angela Merkel, making the extraordinary request that they vote against Israel and against Israel’s public opposition to the resolution.”Chronicle editor-in-chief Stephen Pollard, author of the article, confirmed to the Post that a UK source had said Netanyahu’s office asked Germany to support the resolution. According to the Chronicle, “Highly placed Whitehall sources have revealed that the Israelis regarded Friday’s UNHRC vote as being the lesser of two evils. Although accusing Israel of war crimes, it also held Hamas responsible, and marked a significant watering down of the original resolution put before the council.”When asked where Israel urged Germany to vote for the Gaza resolution, a spokeswoman for Israel’s Embassy in Berlin referred to a statement from Israeli officials on Monday: “Israel informed the members of the UN Human Rights Council that it strongly opposes the resolution adopted on Gaza, as was widely reported in its official statements. At the same time, Israel asked members of the council to ensure that the proposed draft would not be made even worse.”German and Israeli critics hammered away at the Gaza report because of its one-sided attack on Israel. Philipp Mißfelder, a leading Christian Democratic Union part MP in the Bundestag , told the Post on Monday, “Germany should not have supported the UNHCR report covering Operation Protective Edge.Mißfelder, the foreign policy spokesman for the CDU-CSU parties in the Bundestag, added, “The report did not do justice to Israel’s engagement. The Jewish state has the obligation and right to protect its territory and citizens. Although Hamas frequently used human shields, Israel’s military did everything to prevent losses among the Palestinians. Since the end of the operation, Israel has actively supported the rebuilding in Gaza. It would have been better in the UNHRC report to praise the rebuilding than to place blame.”Dr. Efraim Zuroff, director of the Simon Wiesenthal Center– Israel Office, told the Post “How sad that as we mark 50 years of Israel-German relations, the Federal Republic has chosen to approve a UNHRC report which reeks of anti-Semitism and ignores the enormous efforts made by the IDF to avoid civilian casualties, often at the risk of Israeli soldiers.” The center’s chief Nazi hunter added, “It is particularly unfortunate that Germany, which in the past has exhibited justified sensitivity for Israel’s genuine security needs, should fail to recognize the serious flaws in the UNHRC report and it’s obvious anti-Israel bias.”Prof.Gerald Steinberg, the head of the Jerusalem-based NGO Monitor, told the Post,” For many years, the UNHRC has been the hub of anti-Israel political warfare, led by the Islamic bloc, and conducted via the exploitation of human rights and international law.The European Union and its member states, including Germany, are well aware of this hypocrisy, but lack the political courage to condemn it. When Mary McGowan Davis and the UNHRC staff presented their biased “report” on the 2014 Gaza conflict, based largely on unsupported NGO allegations, the German government and its representatives in Geneva were clearly aware of the failures.”But they still joined the world’s dictatorships and repressive regimes in approving the resolution endorsing this charade. While Germany and Israel mark 50 years of cooperation, Germany’s readiness to participate in the ritual anti-Israel demonization taking place in the UN and similar venues is a growing source of friction.“