Precisely because it is so rare that the IDF indicts one of its own for killing Palestinians in the field, these trials carry immense legal, political and diplomatic significance. 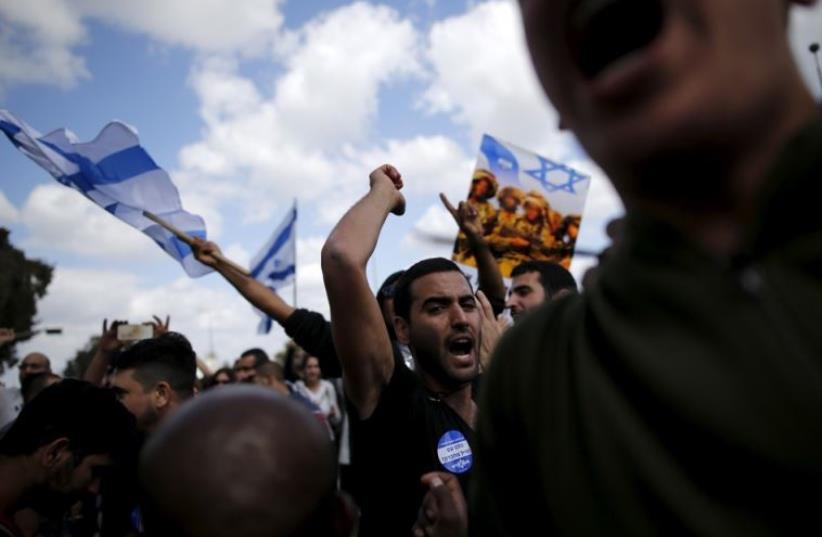 Right-wing protesters show their support for an IDF soldier court martialed for shooting a defenseless Palestinian in Hebron
(photo credit: REUTERS)
Advertisement
In the past six weeks, history has been unfolding before our eyes.Three criminal trials involving soldiers and members of the Border Police over the killing of Palestinians have kicked into high gear. They include the case of the “Hebron shooter,” IDF Sgt. Elor Azaria, who denied the manslaughter indictment against him on Monday; Border Policeman Ben Deri, who killed a Palestinian minor, Nadim Nuwara, in May 2014 in Beitunya; and two former IDF soldiers who shot and killed a Palestinian minor, Samir Awad, near the security barrier in January 2013.Precisely because it is so rare that the IDF indicts one of its own for killing Palestinians in the field, these trials carry immense legal, political and diplomatic significance.On a legal level, the International Criminal Court in The Hague has just begun a preliminary investigation into whether the IDF committed war crimes during or after the 2014 Gaza war, Operation Protective Edge. The court is only allowed to move into a full criminal investigation if Israel does not properly investigate war crimes allegations against soldiers.How each of these trials is conducted and how they pan out will have a major impact on the ICC’s view of the credibility of Israel’s own justice system.Will the ICC say Israel took tough and courageous steps in going after its own soldiers, or will it say that Israeli prosecutors and judges went too easy? Politically, the trials, especially that of the Hebron shooter, have shaken the foundations of the arena.Probably the start of the break between former defense minister Moshe Ya’alon and Prime Minister Benjamin Netanyahu was their public fight over whether to condemn or give partial support to Azaria.The fight also created a break between Netanyahu and the IDF’s high command, the consequences of which are still unclear.Any day now, one of Azaria’s biggest supporters, Avigdor Liberman, could replace Ya’alon as defense minister.Diplomatically, the trials will have massive consequences for how Israel is viewed by the US and various European countries that vacillate between supporting and criticizing Israel. Is it a vibrant democracy trying its best to balance the rule of law with security threats that other countries could never dream of? Or is the rule of law taking a back seat under massive domestic political pressure to acquit soldiers who allegedly violate the laws of war as long as they are in conflict with Palestinians? Like with the ICC, if the process and results of the trials are viewed as legitimate, Israel will be reinforced as it addresses efforts at the UN and by France to impose parameters on it for the future of the Middle East.It would also gain an upper hand in battling the Boycott Divestment and Sanctions campaign, which it faces in universities and business dealings throughout the West.If the process and verdicts are viewed as whitewashing alleged Israeli violations of the laws of war, they will be ammunition for imposing new diplomatic conditions on Israel and will fire up the BDS movement.The fact that the trials are occurring at the same time is coincidence, and they themselves address a range of very different issues. But at the end of the day, their confluence and the fact that they all involve national security questions about interpreting the rules of engagement are what will make them so compelling in framing Israel’s legal, political and diplomatic narrative.