Over the past decade or so a new generation of leaders that combines religion and nationalism has emerged. 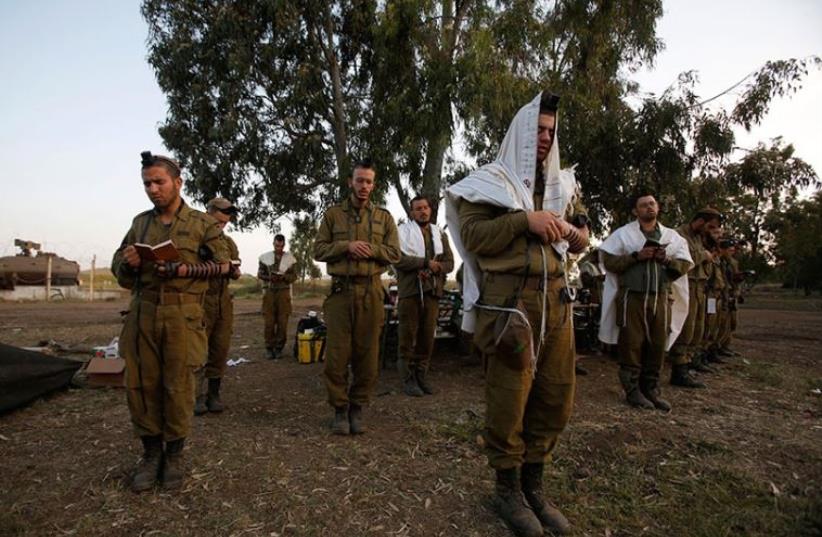 IDF soldiers from the Golani Brigade pray
(photo credit: REUTERS)
Advertisement
JERUSALEM – On a searing night in July 2014, Israeli troops gathered on the border with Gaza to prepare for war. Hamas militants had been firing rockets into Israel for days, and Israeli warplanes had begun bombing the Palestinian territory.The orders for the Givati brigade, an elite infantry unit, came in a typed, single-page letter.“History has chosen us to spearhead the fight against the terrorist Gazan enemy who curses, vilifies and abominates Israel’s God,” Colonel Ofer Winter, the unit’s commanding officer, wrote in the letter to his troops. He ended with a biblical quote promising divine protection for Israel’s warriors on the battlefield.The letter quickly circulated on social media and from there to the press. Secular Israelis condemned it, saying it broke a decades-old convention that kept religion out of military missions.Two years on, the letter remains a symbol of a profound shift within Israeli society: the rising power and reach of religious nationalists. The change has set up a battle for the type of country Israel should be, a battle between the country’s liberals and its more religious nationalist camp.In its early years, Israel’s two main centers of power – the military and the government – were dominated by the secular and mostly left-wing elite who had founded the state in 1948. But over the past decade or so a new generation of leaders that combines religion and nationalism has emerged.Religious-Zionism differs from secular Zionism in its historical perspective and messianic undertones. For Religious-Zionists, caring for places like Jewish settlements in the West Bank – the biblical bedrock of Judaism, but also claimed by Palestinians as their home – is a way of fulfilling a religious obligation and building the Jewish state.  The community, sometimes referred to as the ‘national religious’, has increased its presence in both government and the civil service. This year, for the first time ever, the heads of the national police, the Mossad spy agency and the Shin Bet domestic security service are all Religious-Zionists.Nowhere, though, has the shift been more pronounced than in the military. Most soldiers in the Israeli army are secular or observant Jews, though Druse and Bedouin Arab citizens serve as well. But over the past two decades, academic studies show, the number of Religious-Zionist officers in the Israeli Defense Force (IDF) has seen a huge increase. The military has also felt the growing influence of rabbis who have introduced matters of faith and politics to the battlefield.Some politicians and military leaders have begun to push back.In January, IDF Chief of Staff Gadi Eisenkot announced he would remove a 15-year-old unit dedicated to “Jewish Awareness” from the military rabbinate – the department in charge of providing religious services within the ranks. The Jewish Awareness Branch has periodically drawn criticism from both inside and outside the military for pushing an ideological, right-wing and religious agenda. Some secular Israelis worry that too much religion in the military may lead to soldiers questioning who they should obey: their officer or God.In a letter sent to IDF officers and published by the army, Eisenkot staked out the Israeli Defense Force’s position: A military divided over politics and religion can hardly fulfill its mission. “The IDF is the people’s army and includes a wide spectrum of Israeli society,” he wrote.“A change is needed with the aim of keeping the IDF a stately army in a democratic country, nurturing that which unites its soldiers.”Religious-Zionist politicians and rabbis vowed to block the change and have appealed to Prime Minister Benjamin Netanyahu, whose governing coalition depends partly on support from such voters. Netanyahu himself is secular, though many of his inner circle of advisers and government appointments are Religious-Zionists.The army chief has signalled he does not intend to back down. On April 3, the army said it was moving the Jewish Awareness Branch to the military’s Personnel Wing, even if operational details were still being worked out.

“FIGHTING SPIRIT”Religious-Zionists make up just 10 percent of Israel’s population, a similar size to the ultra-Orthodox Jewish community, though that group is far less integrated in Israeli society and traditionally shuns army service.Rabbis have long served in Israel’s military, but historically they handled logistic issues, such as adherence to Jewish dietary laws. That began to change in the early 2000s. The military rabbinate demanded and won a new role connecting soldiers to their Jewish roots and infusing them with fighting spirit based on faith and centuries-old tradition.The rabbinate established the Jewish Awareness Branch, which offers soldiers tours and lectures on Judaism and lessons that weave together religious teachings with military values like leadership, camaraderie and self-sacrifice.The Israeli military does not hold figures classifying its soldiers as secular or observant. But a detailed study by the Defense Ministry journal Maarachot showed that by 2008, the percentage of national religious infantry officer cadets had increased ten-fold to 26 percent from 2.5 percent in 1990.More recent research by specialists such as Reuven Gal, chairman of the Israeli Association of Civil-Military Studies, shows that trend continuing: Religious-Zionists now account for between a third and half of army cadets.“This is over-representation,” Gal said  “The IDF is the Israel Defense Force, not the Jewish Defense Force. It has religious and secular soldiers. If its values come from the rabbinate (The Jewish Awareness Branch), that’s warped. It’s wrong.”THAT’S VERY BAD”Whatever the Jewish Awareness Branch’s intent, some lawmakers and military officers have grown increasingly worried about it.In 2012, Israel’s State Comptroller, an official watchdog, criticized rabbinate pamphlets that circulated among troops during the 2008-2009 Gaza war. The comptroller was particularly scathing of one pamphlet, which said that “not one millimeter” of land should be relinquished and that battle sometimes required cruelty to the enemy.The growing concern of liberal Israelis was captured in an exchange in February in parliament’s Foreign Affairs and Defense Committee meeting, called by Religious-Zionist lawmakers on behalf of the Jewish Awareness Branch.Lieutenant Aharon Karov, a Religious-Zionist commander wounded in the 2008-2009 war, came to the rabbis’ defense when he explained how he had been injured and its effect on his squad’s morale.“(It) was a head wound, nose, eye, mouth, I didn’t look human and my platoon saw me at that moment,” Karov told the committee. “My company commander asked himself, ‘What do I do with this platoon? They don’t want to keep on fighting.’”The commander called the rabbinate, Karov said, which immediately dispatched a rabbi to Gaza. “He gave them the fighting spirit, reminded them why we were there, why we must go on, and at that moment my soldiers understood from within and went on fighting,” Karov said. “That’s very bad,” replied lawmaker Omer Bar-Lev, who is the son of a former army chief and is himself a retired colonel. “If without a rabbi your soldiers were unmotivated, that’s very bad.”