Analysis: The potential legal fallout of the killing of an innocent Eritrean in Beersheba

Will the state hesitate more to charge the guard and the crowd because of the current security tensions regardless of whether they acted reasonably or based on some racism-influenced presumptions? 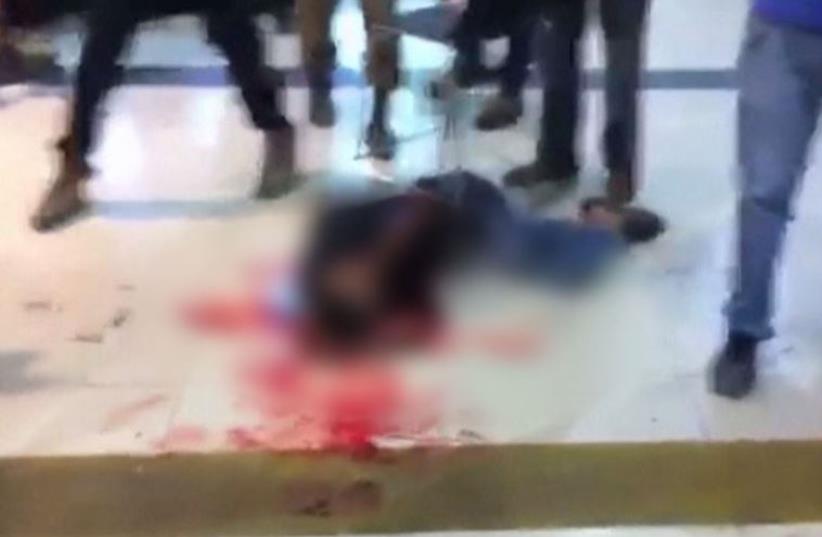 Israeli crowd beat Eritrean migrant mistakenly identified as Palestinian terrorist
(photo credit: screenshot)
Advertisement
The police have announced that they will investigate both the crowd and the private security man allegedly involved in the killing of Eritrean Habtom Zerhom, after they mistook him for a terrorist in the chaos following Sunday’s terrorist attack at the Beersheba Central Bus Station. Zarhum was shot in the leg by a guard, but then beaten to death by a mob.This is exactly the kind of incident that human rights groups have warned of as potential backlash during the current tensions, including bombastic statements by some politicians.
Israeli crowd beat Eritrean migrant mistakenly identified as Palestinian shooter
The opening question for the security guard is, did he have reasonable cause to believe that Zarhum was an additional attacker in the melee after the initial attack? If the guard had reasonable cause, then especially under the extremely dangerous circumstances, the prosecution or a court would be likely to give him more slack for a mistaken shooting of an innocent.Next, what caused Zarhum’s death – was it the gunshot wound by the guard, the beating by the mob, or a combination of both? If the shooting was not the cause of death or not the sole cause, then members of the mob who beat Zarhum could face serious charges.In a previous example, the 2013 sentencing of mob members who beat soldier Eden Natan Zada to death after he murdered four Israeli Arabs and wounded 12 on a bus in Shfaram, some mob members were given light sentences, since their striking Zada was considered to have caused little harm. Others got heavy sentences after their beating of Zada was seen as causing his death.In the Beersheba attack, there could also be a difference in how many crowd members were initially involved, as opposed to those who joined in beating Zarhum who were unsure whether he had been neutralized. This distinction could matter if investigators think some of the crowd reasonably mistook Zarhum for a terrorist.For that matter, the fact that the guard shot Zarhum could be a basis for the crowd to think he was a terrorist, even if after the fact it turns out that the guard himself acted unreasonably.The evidence notwithstanding, the state may hesitate to charge the guard and crowd members because of the current security tensions, regardless of whether they acted reasonably.