Analysis: Why Turkey deal sort of ends 'Marmara' at ICC

In that encounter off the coast of Gaza, the naval commandos killed nine IHH activists who attacked them when they boarded the MV Mavi Marmara. 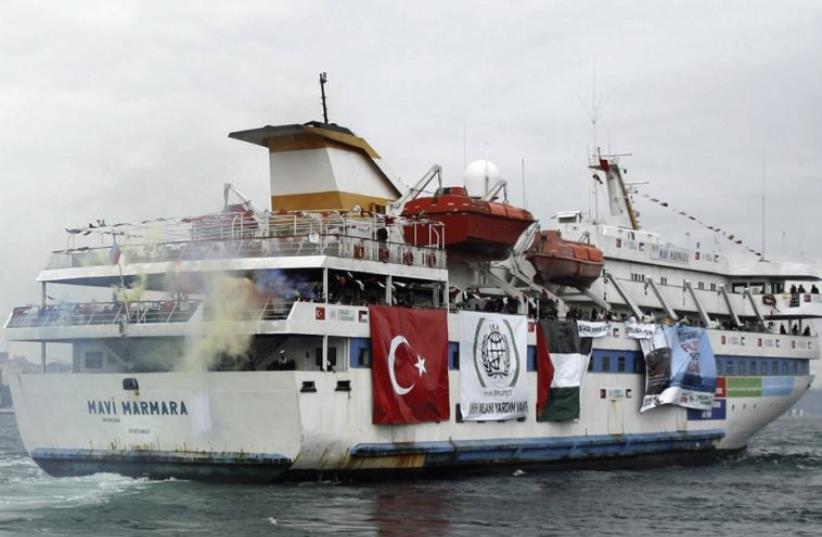 The Turkish ship Mavi Marmara leaves Istanbul May 22, 2010, aiming to break the Israeli blockade of Gaza
(photo credit: REUTERS)
Advertisement
With the Turkey deal virtually signed and sealed, the 2010 Gaza flotilla boarding is finally behind Israel.Other than the asterisk.That is right. As with many things legal, the deal is not entirely clear-cut and the flotilla is not entirely over.The asterisk involves the controversial sea battle on May 31, 2010 between members of the Turkish NGO known as the IHH Humanitarian Relief Foundation (in Turkish, Insan Hak ve Hürriyetleri ve Insani Yardım Vakfı) and IDF commandos.In that encounter off the coast of Gaza, the naval commandos killed nine IHH activists who attacked them when they boarded the MV Mavi Marmara to stop the ship from running Israel’s blockade of the Gaza Strip.For six years, Turkey and supporters of the IHH group have tried to bring Israeli officials up on war crimes in Turkey, foreign courts and the International Criminal Court in The Hague.But Turkey cannot technically close the war crimes file at the ICC because it did not submit it to the court directly, but rather via the relatively unknown Indian Ocean island state called the Union of the Comoros.Comoros was used by IHH supporters as a vehicle for filing the war crimes complaints to the ICC, because there were ships in the flotilla with connections to it, giving the former French colony the right to have a voice.However, once a war crimes complaint is filed, the filer loses control of it and the ICC prosecution may now decide on its own what to do regardless of who filed the complaints.That is the bad news. The good news is that ICC chief prosecutor Fatou Bensouda is vehemently against this case.She has already tried to close the file without a full criminal investigation, saying 10 casualties is simply not a large enough incident to get the ICC involved, regardless of whether what Israel did was illegal.When an ICC pretrial chamber in a split 2-1 vote ordered her to rethink her decision, she was so against the case that she appealed to the ICC’s top Appeals Chamber to help her quash the proceedings.In November 2015, the chamber in another split vote of 3-2 sent mixed signals about whether it agreed with Bensouda to close the file or the ICC lower court, to dig deeper into it.On one hand it analyzed some esoteric legal procedural issues, declaring that Bensouda could not ignore the lower ICC court. On the other hand, the ICC Appeals Chamber told her that even as she has to dig a bit deeper into the file, she still has the ultimate discretion over whether to close the file.Bensouda had argued that the lower court’s ruling was so harsh on her and in its description of Israel’s actions that she needed the ICC Appeals Chamber to jump in and save her from its negative ruling and abrasive tone.The Appeals Chamber essentially said: Ignore the harsh language and tone, you can still do whatever you want and once you have given the issue more thought. If you stick to your guns, the pro-flotilla side, the Union of Comoros, cannot ask any ICC courts to second-guess you again.Even before the Turkey-Israel deal, it was most likely that Bensouda would close the file once and for all, particularly since the votes by both courts were split, showing she has supporters among the judges.With the deal sealed, her doubling down to close the case becomes a virtual certainty and just a question of time.