Jabareen may have known of the attack as early as May 26. 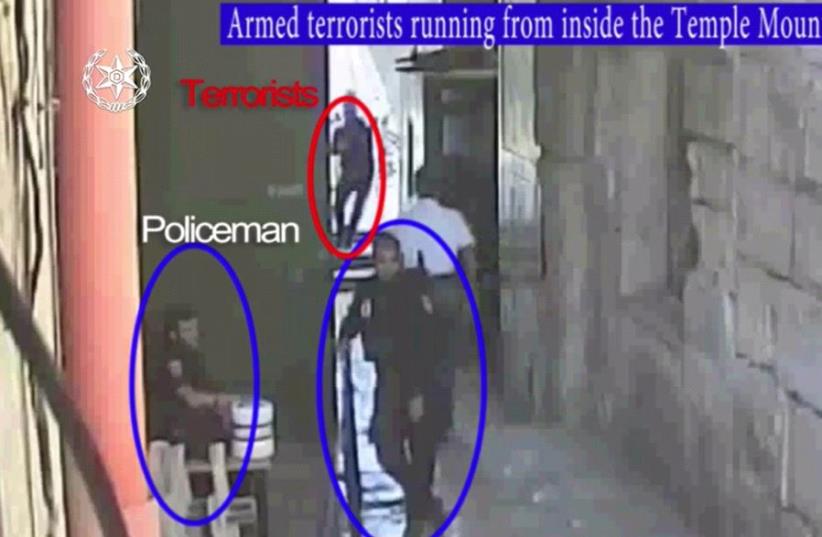 Screenshot of footage released by Israel Police of the terror attack on Temple Mount, July 14, 2017.
(photo credit: ISRAEL POLICE)
Advertisement
Amjad Jabareen, an Arab-Israeli accomplice to a terrorist attack on the Temple Mount in 2017 in which two policemen were killed, was sentenced to 16 years in prison on Wednesday by a district court in Haifa.Jabareen, a resident of the northern Israeli town of Umm el-Fahm, was charged with assisting murder, helping cause substantial harm, using a weapon for the purpose of terrorism, obstruction of justice and connection to a crime.He aided Umm el-Fahm residents 29-year-old Muhammad Ahmad Mahmoud Jabarin, 19-year-old Muhammad Ahmed Fadel Jabarin and 19-year-old Muhammad Hamed Abd al-Latif Jabarin in carrying out an attack on the Temple Mount, which killed two Druze police officers and injured others.The slain police officers were 30-year-old Hail Stawi from Maghar, and 22-year-old Kamil Shanan from Hurfeish, both in the Galilee. Shanan was the son of former MK Shakib Shanan. He was recruited to the Israel Police’s Temple Mount unit in 2012.According to the indictment, Jabareen was present during multiple conversations in which the terrorists discussed the details of the planned attack, including what to target and how, which means he may have known of the attack as early as May 26. The indictment noted that the terrorists initially disagreed about whether to carry out their attack on a settlement or near the Temple Mount.The indictment also said that on the day of the attack, Jabareen drove the assailants part of the way to the Temple Mount. He also hid some of their personal items, contacted another person to destroy footage of them preparing for the attack at an Umm el-Fahm mosque and erased all records of communication with and contact details of the terrorists from his cellphone.Yonah Jeremy Bob contributed to this report.