The $10,000 prize is awarded each year to one Israeli and one Arab in recognition of their work toward coexistence. 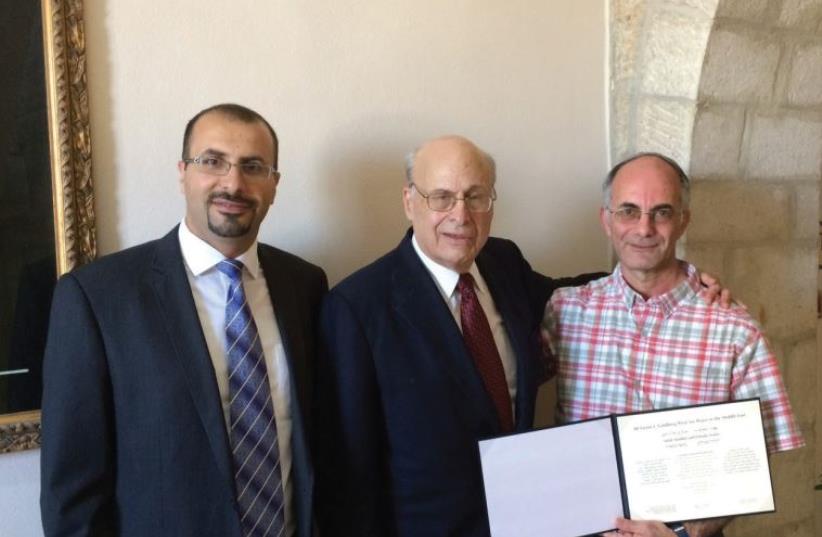 Victor J. Goldberg (center), poses yesterday at the Notre Dame Center in Jerusalem with Salah Alladin (left) and Yehuda Stolov,
(photo credit: Courtesy)
Advertisement
Yehuda Stolov and Salah Alladin were recognized on Monday at the Notre Dame Center of Jerusalem, where they were presented with the eleventh annual Institute of International Education Victor J. Goldberg Prize for Peace in the Middle East.The $10,000 prize is awarded each year to one Israeli and one Arab in recognition of their work toward coexistence.For many, the idea that Stolov, an Israeli Jew, and Alladin, an Israeli Muslim, work closely together might come as a surprise, but their different backgrounds, as well as their relationships as colleagues and friends, have been a source for bringing others together through the Jerusalem-based Interfaith Encounter Association (IEA).As executive director and assistant director, respectively, Stolov and Alladin promote peace and coexistence through open dialogue among diverse populations. Since Stolov founded the organization in 2001, more than 10,000 participants have put aside their differences long enough to discuss their cultures and customs, and, most importantly, their similarities.Forty people, including friends, colleagues and family members, attended the award ceremony.“I wondered what I could do to bring peace to this troubled place, where political leadership has failed to do so,” said Victor Goldberg, a retired IBM corporate vice president who serves on the board of trustees of the Institute of International Education, and who established the award in 2004 to encourage coexistence.“I thought we needed to start at the grassroots level,” he told the crowd. “If you expose young people to different cultures, they come to understand each other, and the prospect of peace in the world is improved.”Representatives of the US Embassy in Tel Aviv and the Consulate General in Jerusalem also delivered remarks.“We have watched the IEA grow from a few small groups into a forum for change,” said Thomas Genton, the embassy’s counselor for press and cultural affairs. “Their work represents the profound importance of individuals coming together to overcome differences.”Stolov knew he wanted to do something to promote peace, though initially he wasn’t sure how. He thought interfaith dialogue could be relevant to people’s lives on a large scale.“I wanted to build relationships between communities, expose the humanity of ‘the other side’ and create bonds of friendship,” he told The Jerusalem Post, adding that after the first dialogue almost 14 years ago, he realized how important it was to build relationships over time.Now, there are more than 50 active dialogue groups, uniting people of all ages.Alladin said that when others see that Arabs are real people, it builds a stronger connection.“A 1,000 mile journey starts with one step in the right direction,” he told the Post. “I can’t put a finger on when and why it happened, but I’ve begun to see changes in the way Palestinians have been describing Jews.”For the past seven years, Ibrahim Mustafa has served as an IEA volunteer and leader of seven dialogue groups. One group he leads is composed of about a dozen Jewish, Muslim and Christian students at the Hebrew University of Jerusalem.The members meet twice a month to talk about their lives and cultures.“It’s challenging to come together and talk about religion, but they respect each other,” Mustafa told the Post.“They need to put the conflict aside to go ahead and be able to have respect.”Taleb Tomeza, a Muslim working for the Palestinian Ministry of Health, began attending the meetings 12 years ago and has since fostered relationships with people of different backgrounds, including Jews and Christians.“I have a hobby as a stone collector, and Bob, the Israeli coordinator of the group, is fond of minerals,” Tomeza told the Post. “We give each other mutual gifts.”He said the meetings, to which he had become “addicted,” defeat the