Some of the Arab communities with high unemployment include Umm el-Fahm, Taiba, Tamra, Rahat, Sakhnin and Kafr Kana. 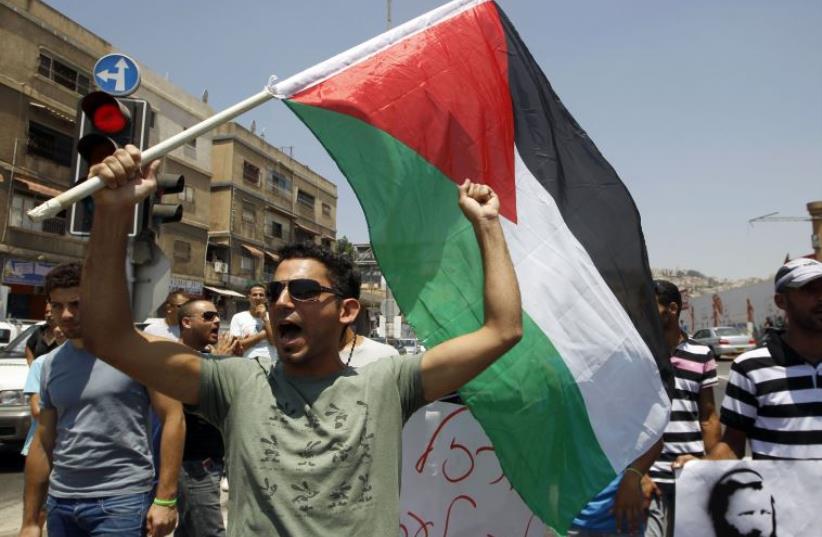 An Israeli Arab demonstrator holds a Palestinian flag during a protest in Nazareth, Israel's largest Arab town
(photo credit: REUTERS)
Advertisement
Israeli Arab poverty rates are dropping, according to data presented at a conference held on Thursday in the northern Israeli Arab town of Arara, yet the sector is set to increase pressure on the government for funds, an NGO head told The Jerusalem Post.The conference, partly organized by the Mossawa Center – The Advocacy Center for Arab Citizens in Israel, dealt with poverty and unemployment in the Arab sector.Kulanu’s MK Eli Alalouf, who heads the Labor, Welfare and Health Committee, spoke at the event.Jafar Farah, the director of Haifa’s Mossawa Center, told the Post that the new government must take responsibility for the problems in the Arab community.“The budget for dealing with the poor is relatively low and needs to increase especially in areas where Arab poverty is high,” he said.Referring to the successful effort by Druse and Circassian mayors to pressure the government with protests in order to get approved a NIS 2 billion five-year development plan earlier this month, Farah wants the Arab sector to achieve the same thing.Arab mayors are going to meet on Saturday and plan the next move, he said. Then, on Tuesday, there is going to be a conference on the subject in the Knesset with Arab MKs and municipality leaders.If their demands are not met, then protests will be held to pressure the government, added Farah.The ultimate solution to poverty in the Arab sector is employment, according to the Mossawa Center, which added that the main cause for the decrease in the Arab poverty rate is the rise in the number of working women.Discrimination, a lack of skilled workers and low participation rates in the labor market are main causes for the poor economic situation.The center showcased evidence from a 2013 report by the National Insurance Institute according to which some 900,000 Arab families – around 47% – are defined as poor. However, it noted that the data did not include Beduin from the Negev, who have a higher poverty rate than the rest of the Arab population.Regarding unemployment, the center said that in 2014 more than 40% of Arab families suffered from long-term unemployment, compared to 30% of Jewish families.Some of the Arab communities with high unemployment include Umm el-Fahm, Taiba, Tamra, Rahat, Sakhnin and Kafr Kana.