According to the Education Ministry, only 50 of the 290 Arab high schools in Israel host a traffic safety program. 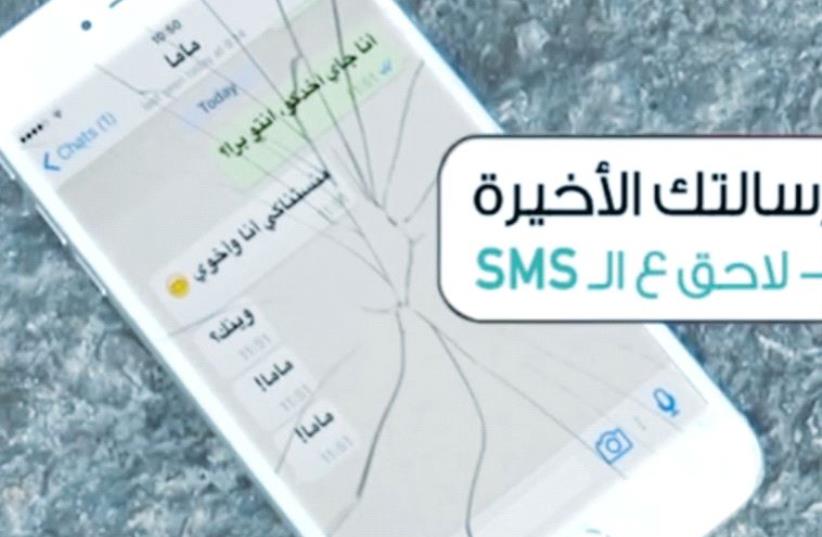 THIS STILL from the new Arabic driver education video shows a mother’s message: ‘Don’t let this be your last text message; focus on driving, you will have time to text.’
(photo credit: screenshot)
Advertisement
Following a spate of recent deadly car crashes involving Arab drivers, the Israel Police, an NGO, and an Arabic news site have teamed up to produce a series of videos on TV, social media and news websites to address the disproportionate number of traffic accidents in Arab society.The videos were released earlier this month in the Arabic media and last week on Channel 2. It is the first campaign ever in Israel in Arabic on this subject.The project is a joint venture led by the The Abraham Fund Initiatives, in partnership with the Traffic Police and the leading Arabic language news site, Bukra. The United States Embassy supported the initiative.Part of the campaign is two 32-second video clips about the cost of dangerous driving: one about texting while driving and the other about speeding.The videos aim to address two findings of a focus group made up of Arab youth and young adults, educators, police, driving instructors, and advertising professionals.First, Arab drivers do not identify or relate emotionally to Hebrew traffic safety public service announcements created for Jewish audiences.Second, dangerous driving needs to be portrayed in a jarring way, consistent with its consequences, in order to have the desired impact on the audience.According to the National Road Safety Authority, in 2015, 30% of fatalities in traffic accidents were Arab citizens. In 2015, 50% of children under age 4 who died in traffic accidents were Arab citizens. In 2015, 61% of fatalities age 5-14 were Arab citizen. In 2014, 62% of youth involved in fatal accidents were Arab citizens.According to the Gertner Institute for Epidemiology and Health Policy Research, one Arab citizen out of seven will be hospitalized as a result of a traffic accident, compared with 1 in 12 among the Jewish public.According to the Education Ministry, only 50 of the 290 Arab high schools in Israel host a traffic safety program.The co-CEOs of the Abraham Fund, Amnon Be’eri-Sulitzeanu and Dr. Thabet Abu Ras, are hopeful that these advertisements will reach Arab youth and save their lives: “The campaign will compensate for the insufficiencies in the education system, lack of police enforcement and infrastructure, and low socioeconomic status, all of which contribute to this epidemic of accidents and subsequent casualties,” they said in a statement.