The Juniper Cobra 16 exercise will involve the United States European Command and the IDF, and will focus on the threat of ballistic missiles, the IDF said on Saturday. 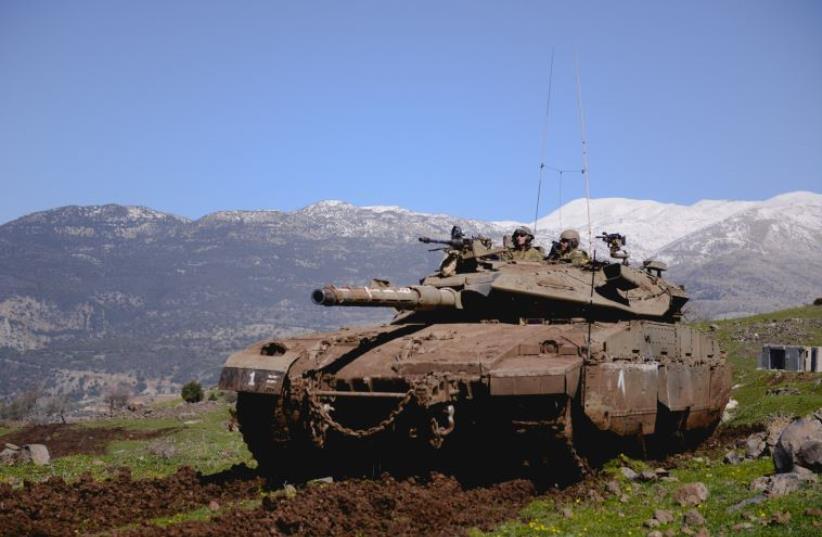 IDF Armored Corps soldiers train on the Golan Heights
(photo credit: IDF SPOKESPERSON'S UNIT)
Advertisement
The Israel Defense Forces and the US military will hold a joint missile defense drill this month, simulating responses to a range of projectile attacks.The Juniper Cobra 16 exercise will involve the United States European Command and the IDF, and focus on the threat of ballistic missiles, the IDF said on Saturday.The Juniper Cobra series of drills “form part of a common strategy and greatly contribute to improving readiness for emergencies,” the IDF added, stressing that the upcoming exercise was planned some time ago.The last such drill, Juniper Cobra 14, a computer-simulated bilateral air defense exercise, was held in Israel in May 2014.Following that drill, the then-American commander of force tasked with assisting Israel during wartime (known as Joint Defense Force-Israel), Lt.-Gen. Darryl Roberson, arrived in Israel to meet members of the air force’s Air Defense Branch.“We have a deep, uncompromising commitment to the security of the State of Israel, a commitment that is based on the special relationship between our countries. The moment the State of Israel notifies us that it is in need of our assistance, we will come to help in defending it,” Roberson said during his 2014 visit.“Naturally, I cannot discuss the numbers of troops [who can deploy to Israel] or describe all the weapon systems, but what is important is the fact that we will bring with us everything necessary to defend the State of Israel,” he added.Israel has since significantly beefed up its multi-layered air defense systems; it carried out a landmark successful interception of a target in space using its Arrow-3 anti-ballistic missile defense system in December.Also in December, the Defense Ministry completed the last phase of trials for the David’s Sling air defense system.The Israel Air Force is expected to take possession of the system in the first quarter of this year.David’s Sling can intercept shortrange to medium-range rockets and ballistic missiles, including guided projectiles, cruise missiles, aircraft and drones. Its range of coverage means it can destroy incoming threats over enemy territory, away from Israeli
skies.