Johnson appeared genuinely moved as he placed his right hand on the Western Wall and paused for a minute while photographers took pictures of him praying. 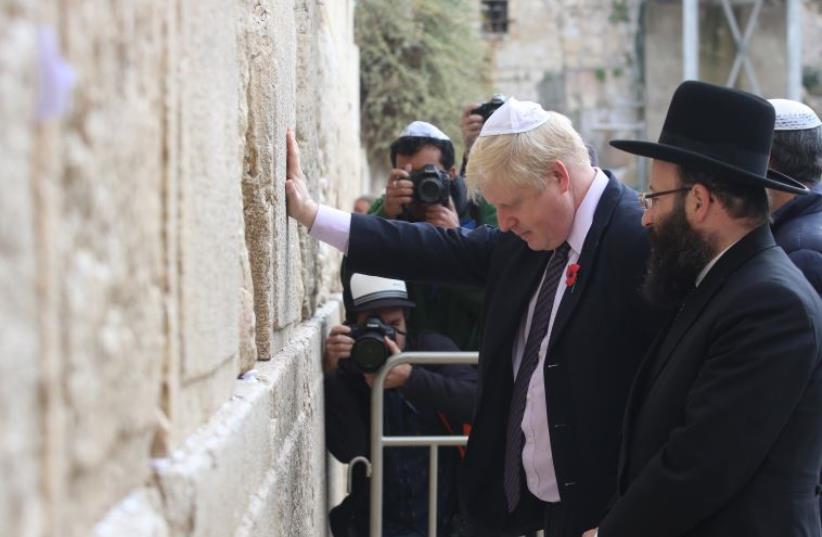 London Mayor Boris Johnson at Western Wall
(photo credit: MARC ISRAEL SELLEM/THE JERUSALEM POST)
Advertisement
London Mayor Boris Johnson confirmed on Wednesday during a visit to the Western Wall in Jerusalem that he has Jewish ancestry.“Yes, I have Jews in my family from Moscow, some of them rabbis,” he told Rabbi Shmuel Rabinowitz, the rabbi of the Western Wall and holy sites. “That’s on my mother’s side.”Johnson, 51, is Anglican and a member of the Conservative Party.
London mayor bikes-Tel Aviv
His artist mother, Charlotte Johnson Wahl (née Fawcett), was from a family of liberal intellectuals, while his father, Stanley, was politically conservative.Johnson appeared genuinely moved as he placed his right hand on the Western Wall and paused for a moment while photographers took pictures of him praying.“It is a great privilege to come to this Wall for the first time in my life, and I join the prayers for peace in Jerusalem,” he wrote in the visitors’ book, as Rabinowitz looked on.Rabinowitz assured Johnson that Israel was maintaining the status quo on the Temple Mount, despite claims to the contrary by the Palestinians.Johnson replied that he had no doubt this was true.“This is a place that is sacred to three great faiths and it is very important to show one’s respect and understanding of the holiness of this place. But if you ask me what I pray for, what everybody wants is to see peace and reconciliation, imagination, generosity and tolerance,” he said. “That’s what Jerusalem is all about. It is about the great faiths coming together in one place in the holiest city in the world. I think that anyone who comes here wants to see that spirit of understanding.Asked if he saw any opportunity for peace between Israel and the Palestinians, Johnson said, “I suppose what I want and what everybody wants is imagination and a spirit of reconciliation on both sides.”Johnson said that the Middle East conflict was “a very ancient problem with disputes that go back centuries,” arguing that it would take “a great deal of patience, a great deal of imagination and a great deal of generosity on both sides” to resolve it.He said he was currently visiting Israel to represent London “and to talk up the partnerships between our great city and this part of the world.”“I don’t think the problems of the Middle East are something I’m going to be able to address in ten seconds now,” he added, before walking away from the Wall with his entourage.Johnson then visited the Temple Mount and the Church of the Holy Sepulchre before heading to Ramallah at the end of his three-day trip to Israel.