Atzili leaves Beitar Jerusalem after three years, with Granada to pay 750,000 euro for his services in accordance with an arbitration ruling from earlier this month. 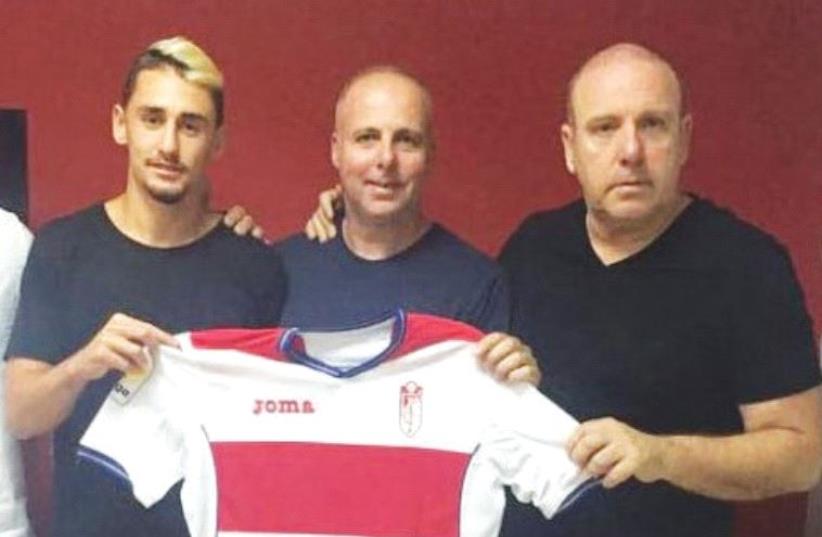 Omer Atzili (left) poses yesterday with a shirt of La Liga club Granada CF with his agents Ronen and Gilad Katzav after completing his move to the Spanish club.
(photo credit: GRANADA WEBSITE)
Advertisement
The Omer Atzili transfer saga looks to finally be over after the 23-year-old striker signed a four-year deal with Granada CF of Spain on Monday, becoming the 11th Israeli player to join a La Liga club.Atzili leaves Beitar Jerusalem after three years, with Granada to pay 750,000 euro for his services in accordance with an arbitration ruling from earlier this month.Atzili had been looking to leave Beitar since the end of last season following bitter contract negotiations which ended in stalemate. Such was the acrimony between the sides that at one stage owner Eli Tabib ordered then coach Slobodan Drapic to leave the player off the team until the matter is resolved.It never was, but while the arbitration process was ongoing, Atzili helped Beitar reach the playoffs of the Europa League, scoring four goals in eight qualifiers. After the arbitrator had ruled that he can leave Jerusalem for what Beitar felt was an outrageous sum, the club offered him a three-year contract extension which would have earned him 1.6 million euro. He quickly turned it down, as well as a lucrative offer from Maccabi Tel Aviv, in order to realize his dream and play in Spain.On Sunday, Beitar requested from the Jerusalem Magistrate Court to cancel the arbitrator’s ruling, but that isn’t expected to prevent the transfer.Granada, which has played in La Liga since 2011, suffered a 5-1 defeat to Las Palmas in its second match of the season on Sunday after drawing the first.“Today I start a new chapter in my career and the first thing I want to do is to thank Beitar Jerusalem for three amazing years,” Atzili wrote on his Instagram page. “Every minute on the pitch was a realization of a dream and it was important for me to finish the European campaign with the team before moving on.“It is important for me to emphasize that I never considered joining another team in Israel and also turned down offers from other countries in order to realize my big dream of playing in Spain,” he added.