"My government will not support one-sided resolutions criticizing Israel of the kind recently adopted by the UN Security Council." 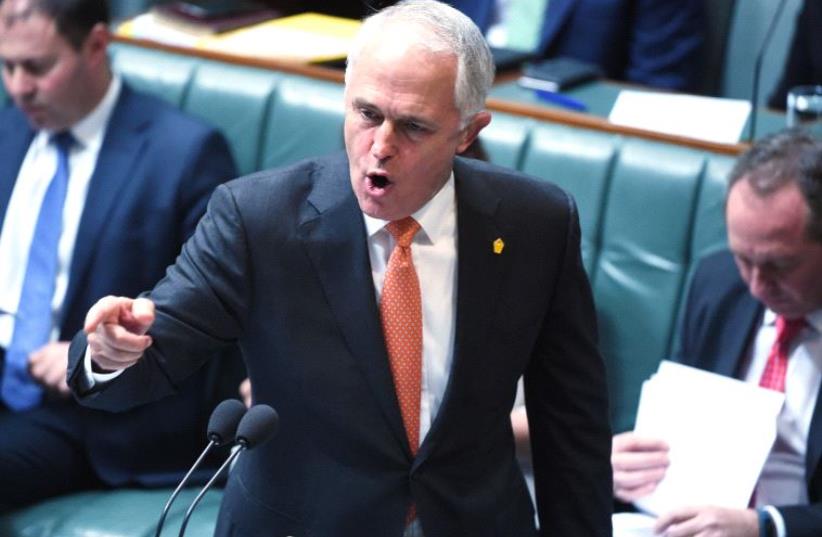 Australian Prime Minister Malcolm Turnbull speaks during Question Time in the House of Representatives at Parliament House in Canberra, Australia, August 31, 2016.
(photo credit: REUTERS/STRINGER)
Advertisement
Australian Prime Minister Malcolm Turnbull offered a staunch defense of Israel on Wednesday, criticizing the United Nations and vowing never to support "one-sided resolutions" calling for an end to Israeli settlement building.Turnbull welcomed Benjamin Netanyahu on Wednesday as the first Israeli prime minister to visit Australia and reiterated Australia's support for a two-state solution to the Israeli-Palestinian crisis.However, he also made clear Australia would not support any resolutions such as the one approved by the United Nations Security Council in December calling for an end to Israeli settlement building on land occupied by Palestinians."My government will not support one-sided resolutions criticizing Israel of the kind recently adopted by the UN Security Council and we deplore the boycott campaigns designed to delegitimise the Jewish state," Turnbull wrote in an editorial in The Australian newspaper.The UN resolution was approved in the final weeks of Barack Obama's administration, which broke with a long tradition of shielding Israel diplomatically and chose not to wield its veto power.Israel for decades has pursued a policy of constructing Jewish settlements on territory captured by Israel in a 1967 war with its Arab neighbors including the West Bank, Gaza and east Jerusalem.Most countries view Israeli settlement activity in the West Bank and east Jerusalem as illegal and an obstacle to peace. Israel disagrees, citing a biblical connection to the land.Washington's ambassador to the United Nations has said the United States still supports a two-state solution to the conflict, although new US President Donald Trump has also said he is open to new ways to achieve peace.The two-state solution has long been the bedrock of Washington and the international community's policy for a settlement between Israel and the Palestinians.Trump's apparent loosening of the main tenet of US Middle Eastern policy, at a joint news conference with Netanyahu last week, stunned the international community."We support an outcome which has two states where Israelis, the Israeli people, the Palestinian people live side-by-side as a result of direct negotiations between them," Turnbull later told reporters in Sydney.Netanyahu said he did not want to be drawn into "labels" but said any solution would need a future Palestinian state to recognize Israel, which would also have security control of the territories.While in Australia, Netanyahu is scheduled to sign agreements fostering closer economic and defense cooperation.