Barkat: I will not support plan to cut off Arab neighborhoods from Jerusalem

Instead of cutting them off, Barkat said to deal with the demographics issue they should attract people to come settle in the city, not separate neighborhoods off from it. 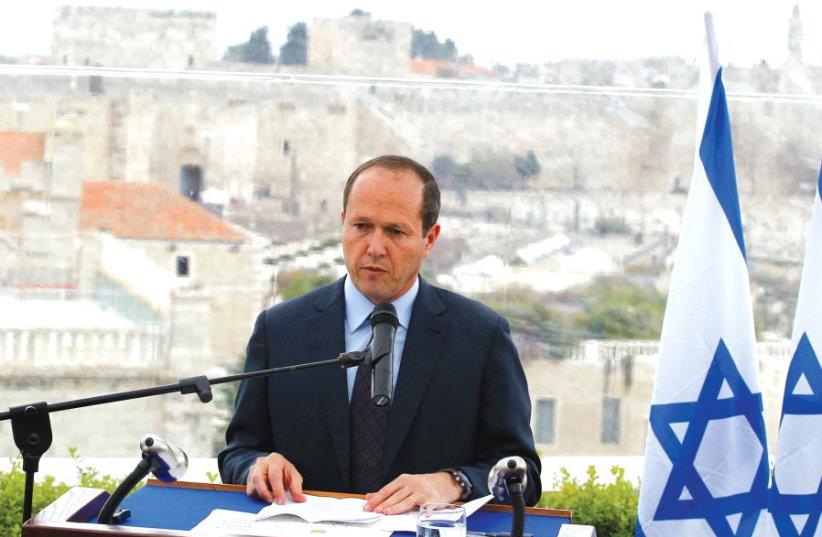 Jerusalem mayor Nir Barkat speaks during a news conference in Jerusalem
(photo credit: REUTERS)
Advertisement
A plan to cut off Arab neighborhoods located behind the security barrier is not an acceptable solution, and if it will be advanced, the Jerusalem Municipality will object, Jerusalem Mayor Nir Barkat said on Wednesday.“I would not support such plan,” he told The Jerusalem Post. “This is not the right step that should be taken. Instead, the services we provide there should be improved.”The plan to cut off neighborhoods located behind the security barrier is being promoted by Jerusalem Affairs and Heritage Minister Ze’ev Elkin, who has suggested the establishment a separate municipal entity to govern these areas.These areas, which include Kafr Akab in the north and the Shuafat Refugee Camp, were physically cut off the capital when the security barrier was erected in 2004. Elkin holds that the fact that these neighborhoods are wide open to the West Bank but are still a part of the capital and attract non-Israeli Palestinians – which leads to mixed marriages – it poses a demographic challenge for the Jewish majority in the city.The lack of law enforcement officials in these neighborhoods also creates a situation that makes it hard to know how many people are living in these areas.While Jerusalem Municipality officials say that there are 51,340 residents living in these neighborhoods, other estimations claim that there are some 120,000 to 150,000 people living there.According to Elkin, most of them are Palestinians from the West Bank who came to the area to be closer to Jerusalem. However, Barkat disagreed, saying that most are residents of the neighborhoods from inside the city, who moved there for cheaper housing – a notion that is backed by NGOs dealing with the issue.Instead of cutting them off, Barkat said to deal with the demographics issue they should attract people to come settle in the city, not separate neighborhoods off from it.“The best way to attract the general public to Jerusalem is [to promote] accelerated economic development in the city,” he said. “And we are witnessing this change – the economy is improving, and people are coming to live here. This the best answer [to the demographic challenge],” he said, noting the city’s development in both the hi-tech and tourism sectors, and providing jobs for many east Jerusalem residents.Barkat acknowledged that since the barrier was erected, it has become harder to provide services to these neighborhoods. Jerusalem municipal workers rarely cross the checkpoints and services are mainly provided by subcontractors, which Barkat said, is mainly because of security reasons.“Sometimes it is somewhat difficult to provide services there, especially in times of violence. I cannot put the lives of municipal workers in danger,” he said. “In these cases, the whole apparatus is more complicated. There is a direct linkage between the security situation to our ability to provide services,” he added.However, he stressed that these areas should remain part of the city, and that the services there should be upgraded.“To people living in places where it is hard to provide services, we say, ‘Help us help you.’ As time goes by, we see that this message is understood in most places, and we see more and more cooperation. That translates into providing services and we are happy to do so,” he said.Barkat met with Elkin two weeks ago to discuss the plan. Municipal officials told the Post that the mayor and the minister speak regularly, even when they are in disagreement. They added that the mayor would present his objection to plan at the National Security Council, “which is the proper place to hold this discussion.”“Elkin’s plan isn’t good; I won’t support it,” Barkat said. “The solution would be to upgrade the services in the neighborhoods behind the wall and to invest more resources there.”“These are parts of our city, and we should invest in them, period,” he added.Elkin’s office refused to comment on the matter.