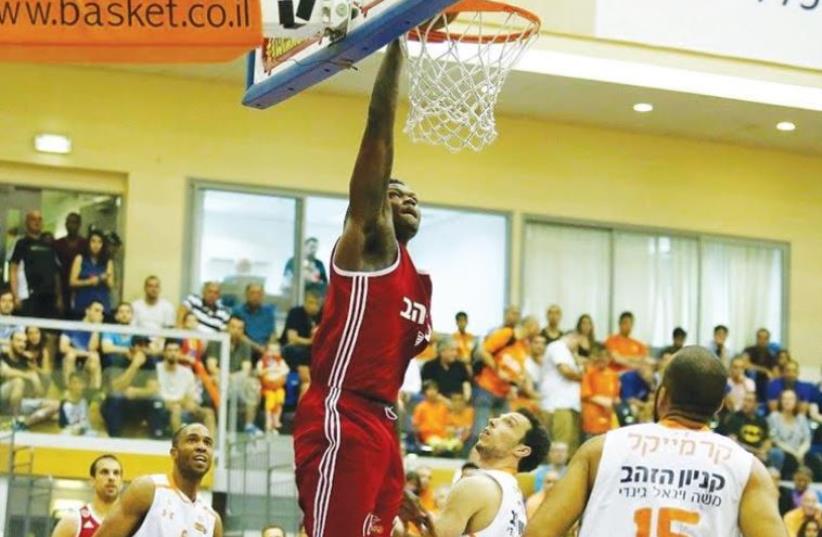 Hapoel Jerusalem forward Dion Thompson
(photo credit: ALEN SHIVER/BSL)
Advertisement
Hapoel Jerusalem is one victory away from advancing to its first BSL final in eight years after taking a 2-0 lead over Maccabi Rishon Lezion in their best-offive semifinal series on Monday night, claiming a 76-75 conquest on the road.Rishon had hoped to register a surprise win after a tight Game 1 in Jerusalem. However, its season will be over should it fail to win at the Jerusalem Arena on Thursday after Hapoel survived a Rishon comeback to prevail on Monday.Isaiah Swann had a chance to snatch the win for Rishon in the final seconds after Jerusalem dominated the first three periods, but his layup didn’t even hit the rim and the visitors held on.Hapoel’s last appearance in the final came in the 2006/07 season, with Dan Shamir at the helm and the likes of Meir Tapiro, Timmy Bowers and Terence Morris on the roster.In seven seasons since, Hapoel has always fallen short of the league final, with coaches Guy Goodes, Oded Katash, Sharon Drucker and Brad Greenberg all failing to meet expectations.However, Danny Franco seems set to end that drought in his first season in charge, with Jerusalem finding top form at the perfect time.Hapoel ended the regular season with 15 wins from 17 games and improved to 5-0 in the post-season on Monday.Donta Smith had 25 points for Jerusalem, with Shawn Dowson finishing with 24 points for Rishon.Maccabi Tel Aviv, meanwhile, can become the first team to progress to the final on Wednesday when it hosts Hapoel Eilat at Yad Eliyahu Arena with a 2-0 lead.Should both Maccabi and Jerusalem complete sweeps this week, the home-and-away final will begin next Wednesday, June 17. As the No. 2 seed, Jerusalem will host the first game, with the return leg to be held at No. 1 seed Maccabi five days later.If either of the semis goes to a fourth game, the first leg of the final will take place on June 22, with the second encounter to be played three days later.American forwards Smith and Dion Thompson scored 21 of Hapoel’s 24 points in the first period on Monday, with the visitors leading by nine points at one stage.However, eight straight points by Dominique Johnson brought Rishon within a single point (22- 21) and Jerusalem led 24-21 after 10 minutes.A 13-2 run in just over three minutes saw Jerusalem establish a comfortable double-digit gap (37-25), with Franco’s men maintaining the 12-point cushion (42-30) until the break thanks to an excellent defensive quarter.Hapoel held Rishon to just nine points on 4-of-18 from the field, but the hosts had hope once more after going on an 8-0 surge in two minutes early in the second half to cut the deficit to five points (45-40).Smith replied with 10 points, including two triples and one thunderous dunk, as part of a 13-2 Hapoel run which opened a 16-point margin (58-42). Rishon closed within three points (76-73) entering the final minute, but it couldn’t complete the comeback and faces elimination on Thursday.