Four division commanders were appointed in the latest round of promotions and appointments, which are made approximately every year. 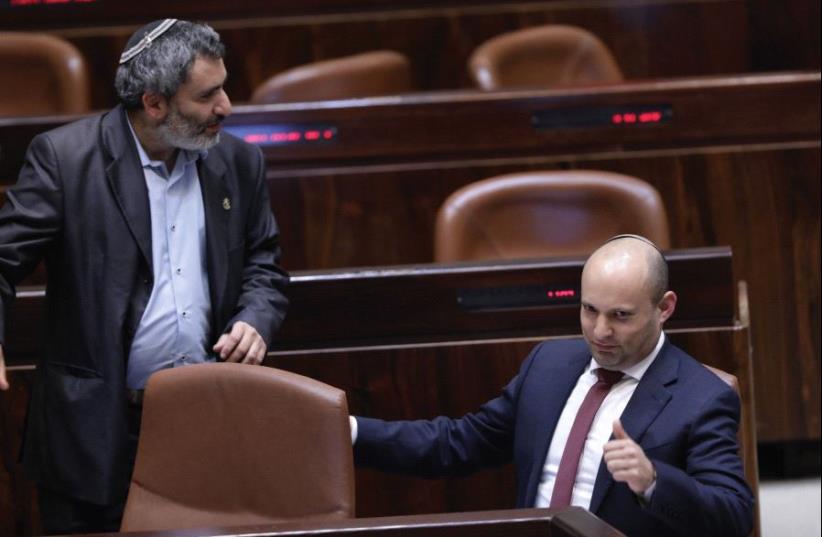 BAYIT YEHUDI MK Naftali Bennett gives the thumbs-up sign during the vote on the settlements regulation bill in the Knesset in Jerusalem Monday night.
(photo credit: YONATAN SINDEL/FLASH 90)
Advertisement
Bayit Yehudi MKs Bezalel Smotrich, Shuli Moalem-Refaeli and Moti Yogev have issued strong criticism of the IDF’s decision not to promote Brig.- Gen. Ofer Winter to the position of Division Commander in its latest round of promotions.Party leader Naftali Bennett refrained from criticizing the army for not promoting Winter, but described him in glowing terms as one of the “most courageous and talented” IDF commanders in the current generation.Four division commanders were appointed in the latest round of promotions and appointments, which are made approximately every year.Winter was overlooked for promotion in the last round of appointments as well.Winter, who comes from the national-religious community, is a highly considered officer, but he generated controversy in the 2014 Protective Edge conflict in Gaza during which he served as the commander of the Givati Brigade when he issued a letter of encouragement to his soldiers invoking God and using religious themes and quotations to exhort them to victory.He was also involved in the decision to employ the so-called Hannibal protocol during the Black Friday incident in Protective Edge, in which between numerous Palestinian civilians were killed.Smotrich wrote on Twitter that if he was Winter he would “take off his uniform and become a civilian” and accused the IDF of seeking to “keep the table of the general staff clean of kippas,” meaning religious officers.Moalem-Refaeli said that Winter had become “a strategic target for those fighting ‘religiousification’ in the IDF,” a critical reference to claims that national-religious soldiers and officers are introducing religious influences to the IDF.“With a rich record of command in the field and operational achievements, Winter should have been promoted to senior command in the IDF,” she said. “The loss is entirely ours.”Yogev specifically referenced Winter’s letter to his soldiers in 2014, saying that it had become “a black mark appended to him” and that he was a “rare and courageous fighter” and said he was “deeply saddened by his lack of promotion.The liberal National Religious Ne’emanei Torah Va’Avodah (NTA) organization was, however, critical of the notion that the national religious community should advocate for specific commanders and lobby for the promotion of religious officers.“Counting kippas is what causes the most damage to religious officers, who should be promoted regardless of their kippa,” said NTA director Shmuel Shetah.“I don’t know why an officer such as Winter was not promoted, but it would be appropriate not to turn this into another attempt to create friction between the army and the religious community.”