There are two American-born MKs in the current Knesset: Michael Oren (Kulanu) and Yehudah Glick (Likud). 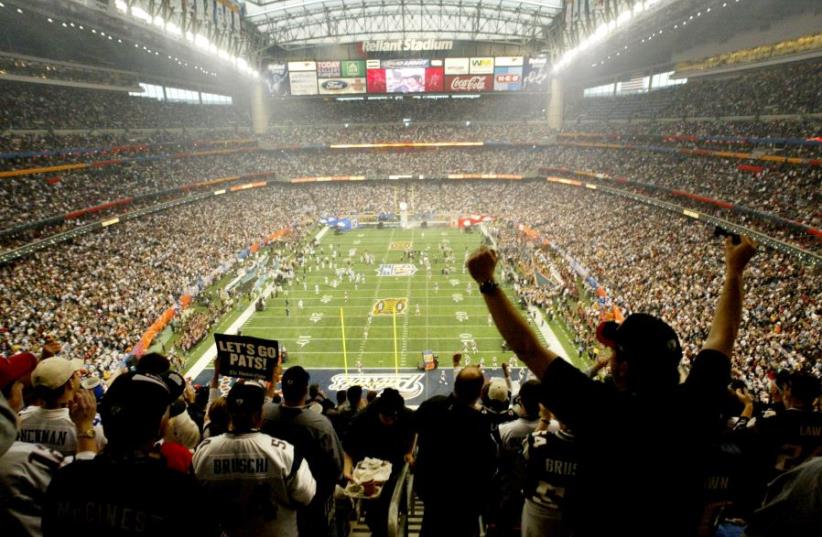 The field at Reliant Stadium is seen from overhead just before the start of Super Bowl XXXVIII, in Houston, Texas
(photo credit: REUTERS)
Advertisement
Bayit Yehudi is the only political party here that will be hosting a Super Bowl party on Sunday night, after Yesh Atid hosted parties the last two years.Yesh Atid was the first party to host an event for the game in an effort to reach out to Americans who had moved here. Leader Yair Lapid came to the party in Tel Aviv in 2015 and watched the entire game, but did not come to last year’s affair.Sources in the party said they were sure Lapid would still watch the game, as he does every year, and that they expect the tradition of holding a Yesh Atid party to continue in upcoming years.“Following the many requests that have been sent to me – I would like to invite all Bayit Yehudi Anglo Forum party members to an official Super Bowl party,” forum chairman Jeremy Saltan posted on Facebook.Saltan stressed that the event would be limited to members of the forum.“Particularly, Yesh Atid members, who will not have a Super Bowl party this year for some reason, will not be welcome,” Saltan wrote. “To my non-American friends – football is not to be confused with soccer.” 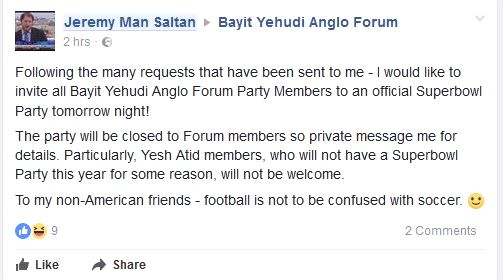 Saltan's Facebook post. Credit: FacebookThere are two US-born MKs in the Knesset: Michael Oren (Kulanu) and Yehudah Glick (Likud). Oren told The Jerusalem Post that he is a diehard Patriots fan and that he would be watching the game. He added that had he been in the US he would have attended it as he did in the past.Although Oren was raised in New Jersey, his family is from Boston and he is friends with the Patriots ownership.Glick said he would not be watching the game and declined to endorse either team.The owners of both of the game’s teams – the New England Patriots’ Robert Kraft and the Atlanta Falcons’ Arthur Blank – are Jewish philanthropists who are strong supporters of charities and causes in Israel.Kraft has become close to Prime Minister Benjamin Netanyahu and recently hosted former prime minister Ehud Barak in his private box at a game. Netanyahu said in a television interview 25 years ago that he became a fan of the New York Giants when he was ambassador to the UN.