MK Stav Shafir will call a special Knesset hearing next week to examine how police handle cases of violence and excessive use of force. 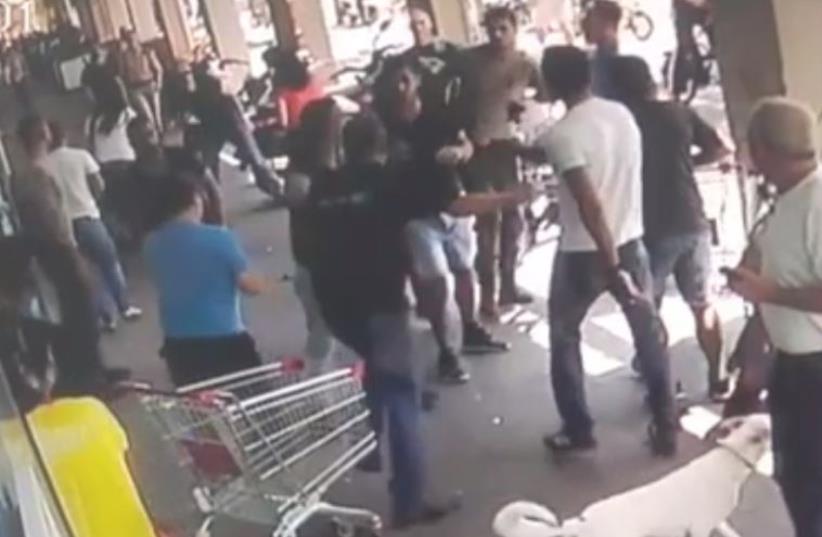 A clash between Border Police officers and an Arab worker in Tel Aviv
(photo credit: screenshot)
Advertisement
MK Stav Shafir will call a special Knesset hearing next week to examine how police handle cases of violence and excessive use of force, two days after an Israeli-Arab was beaten by police outside a grocery store in central Tel Aviv. Shafir, the chair of the Special Committee for the Transparency and Accessibility of Government Information, said that she would request statistics and a demographic and social breakdown of complaints issued against police, and a breakdown of how these cases are handled by police. She also called on members of the public to contact the committee with information relating to police brutality, in particular if they themselves were witnesses to or victims of such violence. “In recent years we are seeing more and more cases of police violence directed at specific groups in Israeli society. The vast majority of police do excellent work, and sometimes are subjected to exaggerated criticism, but when it comes to police violence against Ethiopian-Israelis, Arabs, and right and left-wing protesters, the treatment of these cases must be much more seriously.”She added that when abusive police are not punished “it sends the message that there are people in the state of Israel – those who have a different religion, nationality, accent or skin color, for whom the law of the state do not protect them.”On Sunday evening, the Justice Ministry announced that they had begun a probe into the incident outside the “Super Yuda” on Ibn Gvirol earlier in the day, in which Maysam Abu Al-Kiaan, a resident of Hura, was beaten by plainclothes police after arguing with them after they asked him to produce an ID card. Abu Al-Kiaan was hospitalized after the assault and released to house arrest the same day, on suspicion of punching and also biting one of the officers. The assault of Al-Kiaan was caught on surveillance camera video and raised a great deal of criticism in Israel, in particular on social media and from left-wing and Arab MKs. Police have claimed that their officers were assaulted first.