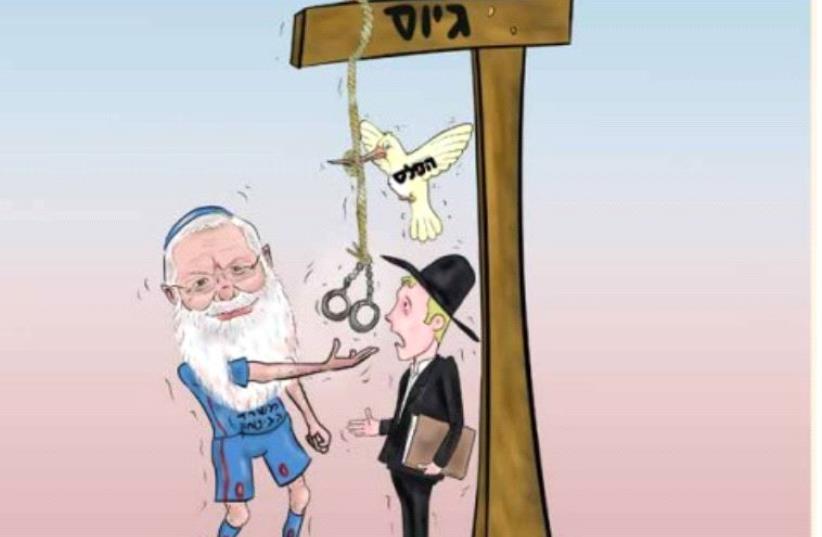 Eli Ben-Dahan caricatured
(photo credit: HAPELES NEWSPAPER)
Advertisement
Deputy Defense Minister Eli Ben-Dahan has seemingly been designated as enemy No. 1 by the leading opponents of haredi enlistment in the ultra-Orthodox community after he was disparagingly caricatured in the radical Hapeles haredi daily newspaper.Ben-Dahan has been active in recent months combating incitement against haredi soldiers and has taken a series of steps to clamp down on the phenomenon, which has led to the serial abuse of haredi IDF personnel in haredi neighborhoods.In its weekend supplement, Hapeles, the mouthpiece of the radical Jerusalem Faction group, published a caricature of Ben-Dahan showing a haredi yeshiva student on a gallows bearing the word “enlistment” and a noose with manacles attached.A dove with the word “Hapeles” on it is seen trying to peck away at the noose proffered by Ben-Dahan to the yeshiva student.The caricature comes in response to a recent media interview given by Ben Dahan in which he identified Hapeles as one of the primary haredi institutions giving oxygen in public to the delegitimization campaign against haredi soldiers.The paper has written scathingly against haredi enlistment to the IDF, while haredi IDF personnel and individuals involved in encouraging haredi enlistment have accused the Jerusalem Faction of being behind the campaign.Demonstrators at anti-enlistment rallies and protests are frequently from the Jerusalem Faction, and yeshivas associated with the radical group instruct their students not to report to enlistment offices for preliminary processing.Most haredi yeshiva students do report for this preliminary process, in order to obtain their deferrals and exemptions from military service.Speaking to The Jerusalem Post, Ben-Dahan described the caricature as “very severe” and criticized Hapeles for utilizing the Torah and Torah study as a tool for incitement.“This is the only paper encouraging and supporting the incitement and this encouragement contributes to the atmosphere of hostility in the haredi sector around the issue of enlistment,” said Ben-Dahan. “This caricature and editorials from the newspaper give coded messages encouraging incitement.”In recent years, radical elements within the haredi community have published flyers, posters, public notices and booklets and placed them in public areas denouncing haredi soldiers, and portraying them as pigs and in other offensive ways.Last week Ben-Dahan wrote to the Attorney General asking him to hold a hearing on the issue and allow for closer scrutiny of the funding sources of the incitement campaign, and possible sanctions against those providing money for it.The deputy editor of Hapeles, Yishayhu Wein, questioned Ben-Dahan’s motives for objecting so strongly to the cartoon, accusing him of seeking publicity.Wein also denied the cartoon constituted incitement, saying it depicted the state’s campaign to enlist yeshiva students against their will.Numerous yeshiva students who study at yeshivas associated with the Jerusalem Faction have been arrested by the military police for failing to present themselves for preliminary processing, and put in jail.Two yeshiva students have been arrested in recent days, leading to fierce protests including demonstrators from the Jerusalem Faction.“This is a cartoon to demonstrate the way yeshiva students are being put in jail. This is part of the freedom of speech in this country and it’s unclear to me why Ben-Dahan is so upset by this cartoon,” said Wein.