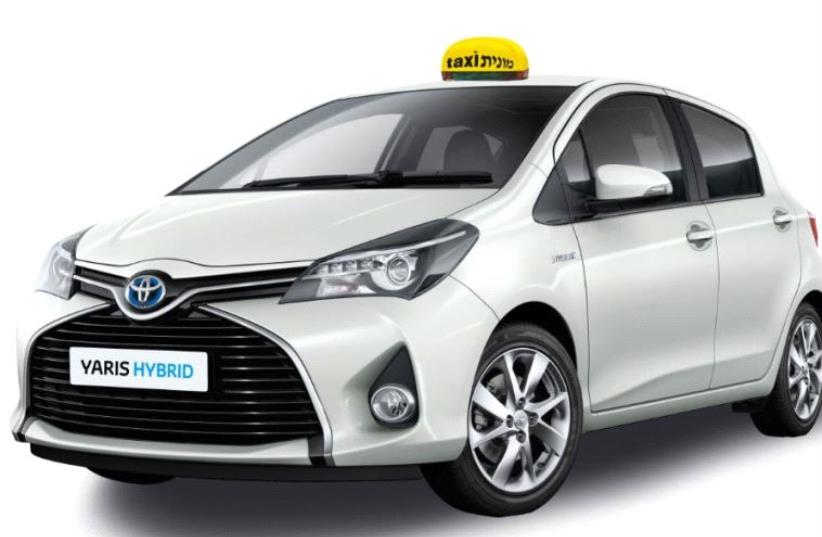 A depiction of a hybrid Israeli taxi of the model type Toyota Yaris
(photo credit: ENVIRONMENT PROTECTION MINISTRY)
Advertisement
The Israeli Tax Authority (ITA) reports that it sent its ace team of bookkeeping examiners to Ben-Gurion airport in the early hours of July 25 to check out the taxi drivers. It made a startling discovery. Not one of the drivers checked recorded their income! The ITA team was conducting a preliminary tax audit in preparation for a wide-ranging review of taxi drivers offering their services to and from the airport. This followed changes in the operational situation at the airport, allowing different taxi companies to operate there. The ITA team checked eight taxi drivers and none passed with flying colors.One of the taxi drivers was caught for not recording NIS 120 and when asked about it, claimed that the passengers hadn’t yet paid and he had to get back to them. But when the ace examiners asked for the phone number of one of those passengers, the driver admitted he hadn’t recorded that either.Another driver who didn’t manage to record NIS 200 paid to him claimed he had only been working two days.Three other drivers who failed to record receipts answered: “I forgot,” “I’m an employee and it wasn’t in my mind,” and “I confess, how much will that cost me?” Another driver also didn’t record NIS 200 nor the trip itself and claimed he wasn’t paid at all: “I receive a chit from the taxi station before setting out and afterwards I offset the invoices.” When asked to produce the chit, he said it was at the taxi station.Another driver did well by switching on his meter, but stopped it and printed out a receipt for NIS 20 from a previous journey, although the current journey cost more. The driver claimed he had been discussing Torah with the previous passengers.Object of the exercise:The ITA regularly reports similar sting operations around the country. They are carried out as part of a tax enforcement drive to improve deterrence, bring about the collection of the right tax and to improve the sharing of the tax burden.Why? As every business in Israel knows, there are strict bookkeeping and customer billing rules – approved Israeli software or printed books must be used – not Excel, Word, QuickBooks or Sage. Otherwise, the ITA not only levies fines, it can also estimate taxable income, which is never good for the taxpayer.What should you do?If you are in business in Israel, you must keep up to the minute records of all your income and issue tax invoices and receipts for all amounts received. Or hire an accountant with the right software to do it for you.If you have a shop, you must have an approved cash register. If you ship goods on the road, they must be accompanied by a tax invoice or goods delivery note. And be prepared for field audits by ITA officials – they have heard all the excuses before.If you are slow recording your expenses, after six months you cannot recover input VAT. And medium-large businesses must file detailed VAT returns listing every single purchase and sale invoice in chronological order. The VAT Authority then applies big data techniques to compare nearly every purchase in the Israeli economy with nearly every sale. This enables the VAT Authority to detect discrepancies and pounce. This is unlike the situation in most Western countries, but it is possible in a small country with sealed borders.As always, consult experienced tax advisers in each country at an early stage in specific cases.leon@hcat.coThe writer is a certified public accountant and tax specialist at Harris Consulting & Tax Ltd.