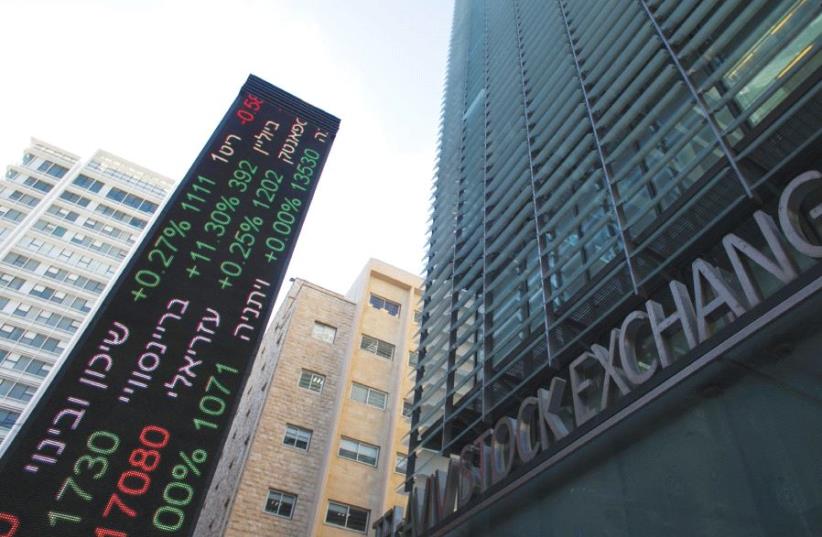 An electronic board displaying market data is seen at the entrance to the Tel Aviv Stock Exchange
(photo credit: REUTERS)
The Tel Aviv Stock Exchange rose on Wednesday, a sign that for investors and brokers it’s business as usual, despite the police recommendations that Prime Minister Benjamin Netanyahu be indicted for bribery and breach of trust.The TA-35 and the TA-125 – the indexes with the most highly capitalized companies on the stock exchange – were up 0.52% and 0.66%, respectively, as of closing. And the shekel slightly weakened against the dollar, continuing a weeks-long trend.“Nothing happened economically, and even if you take a scenario in which Netanyahu is going to step down, it’s speculation,” Ori Greenfield, Psagot Investment House’s chief economist and strategist, told The Jerusalem Post.“And even if Netanyahu would step down and there would be a new government, the economic position of the new government probably wouldn’t be very different from the current government. So, when you look at the market, investors see that the economy is staying good and if the market was interesting before then, they would think that as well now.”Greenfield added that he wouldn’t change his asset allocation and stock portfolio because of the police recommendation.Israeli stocks had fallen sharply last week in response to gyrations on Wall Street and fears that global interest rates would soon start rising. But the markets evinced little to no concern over the fighting in Syria and the shooting down of an Israeli fighter jet. And the Netanyahu probes have yet to frighten local investors.It is now up to Attorney-General Avichai Mandelblit to decide whether to indict his former political ally, a process that could take months.Given that Netanyahu is the second prime minister in a decade – after Ehud Olmert – to face police recommendations that he be indicted, it is possible that the trend could change how businessmen approach politicians.Namely, the police recommendation to indict the prime minister could sow future doubts with international investors.“Israel needs foreign investment,” said Shlomo Maital, a senior research fellow at the Technion-Israel Institute of Technology’s Samuel Neaman Institute, which specializes in national policy research. “The pervasiveness of high-level corruption is growing and must be of concern to those who might consider sending their money to Israel.”Israel is ranked 28th in the world in “perceived lack of corruption,” according to Transparency International. Yet, that raking will probably fall next year, Maital said, a sign of the shifting cultural winds.“Forty years ago, a labor minister, Avraham Ofer, committed suicide simply because there was a report that he might have cheated,” Maital said. “Today? Everybody does it. The cultural norm has changed from ‘Corruption brings unbearable shame’ to ‘Corruption? It’s part of the game.’”For the professor, corruption could scare away smart, young people from politics and force out entrepreneurs such as Erel Margalit, a venture capital pioneer.And, Maital says, corruption could undermine Israel’s success as a “Start-Up Nation,” rotting away dynamism and entrepreneurship. That would affect Israel economically.
Sign up for the Business & Innovation Newsletter >>