Israeli Prime Minister leads the weekly Cabinet meeting in Jerusalem
(photo credit: MARC ISRAEL SELLEM)
Advertisement
Prime Minister Benjamin Netanyahu called on Palestinian Authority President Mahmoud Abbas to condemn the Har Adar terror attack Tuesday morning that killed two security guards and one border police officer, and not to justify it.Speaking before the weekly cabinet meeting, Netanyahu said that the attack is the result – among other things – of “systematic incitement by the Palestinian Authority and other elements.”"The security forces will continue to take action against incitement and terrorism as they have been doing night and day and we, of course, will finish the investigation of the incident and will discuss together the next steps," Netanyahu said.Netanyahu said that the home of the terrorist, 37-year-old Nimer Jamal from Beit Surik, will be destroyed, and that the IDF has secured a closure around the village. Additionally, all work permits for the members of Jamal's extended family will be revoked.
Housing Minister Yoav Galant speaks at the scene of the Har Adar terror attack (Tovah Lazaroff)
President Reuven Rivlin responded to the attack, saying the nation's hearts are with the families of the victims. "The brutal terror attack exposes once again the daily reality that Israeli security forces, who are on the front lines, have to deal with," said Rivlin. "We will continue to confront terror and put our hands on the attackers and their backers."Defense Minister Avigdor Liberman (Yisrael Beytenu) condemned the attack and vowed to hunt down the terrorists and those who sent them out to kill Israelis. Liberman stressed that there is no difference between Palestinian fueled terror and fundamentalist Islamic terror in Europe. He added that before there could even be talk of negotiations, the world must demand the Palestinian Authority to cease its inciting ways."Mahmoud Abbas incites against Israel in the United Nations and a Palestinian terrorist kills three Israelis and wounds one," said Minister of Intelligence Israel Katz  (Likud), who is a member of the security cabinet. "The fact that the terrorist exploited the entry of Palestinian workers into Israel in order to carry out an attack will have serious implications for the ability to employ Palestinians and ease their conditions of passage. The attack is also a message to special US envoy Jason Greenblatt, who is visiting Israel today: Israel's security was and yet remains the supreme consideration in the government's policy, and is above any other consideration of improving and easing the lives of the Palestinians." 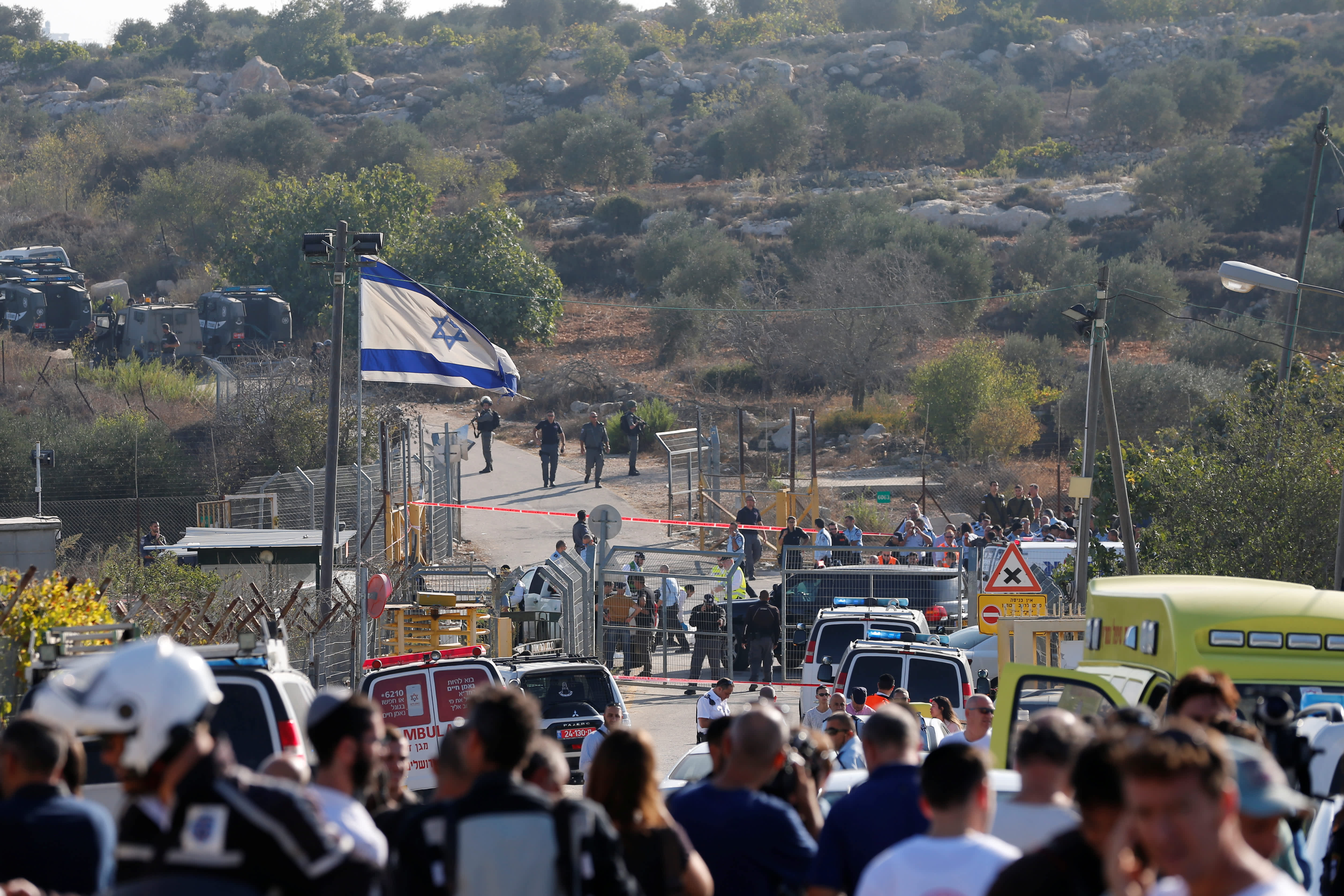 A general view of the scene of the terror attack in Har Adar (AMMAR AWAD / REUTERS)
Internal Security Minister Gilad Erdan (Likud) said there were no prior indications about the assailant's deadly motivations. He placed responsibility for the attack at the feet of the Palestinian Authority, which, he said, encourages terror with its policy of handing out stipends to terrorists and their family members.Deputy Foreign Minister Tzipi Hotovely (Likud) called the attack "the Palestinians' welcome greeting to American envoy Jason Greenblatt." She said the Americans must focus all their attention on ending the "murderous Palestinian terror efforts" and that any negotiations with them are futile as long as they continue to incite to terror.Agriculture Minister Uri Ariel (Bayit Yehudi) said Israel should respond to the attack by building more in Judea and Samaria and advancing a diplomatic approach that involves encouraging Palestinians and Israeli Arabs to move to other countries. The fiercest response came from Likud MK Nava Boker, who said terrorist Nimer Mahmoud Ahmad Jamal was "Satan" and his body should be thrown into the sea. Zionist Union Chairman Avi Gabbay called on the government to act "with an iron fist" against terrorists whose sole purpose is to harm Jews. "Har Adar is a community that for years exemplified coexistence between Jews and Arabs. This attack is a severe blow to the relations between the two communities," said Gabbay.Former prime minister Ehud Barak added that the government must respond with actions rather than words to stop further terror.Joint List MK Yousef Jabarin blamed the policies of the Israeli government for the attack. "The far-right Israeli government is responsible for the bloody circle of violence and the conflict's enshrinement," he said. "There is no such thing as an enlightened occupation. There is no occupation without resistance."