Bennett to OECD education ministers: We can transform the world

The conference in Jerusalem brought together some 30 education ministers and delegations from around the world. 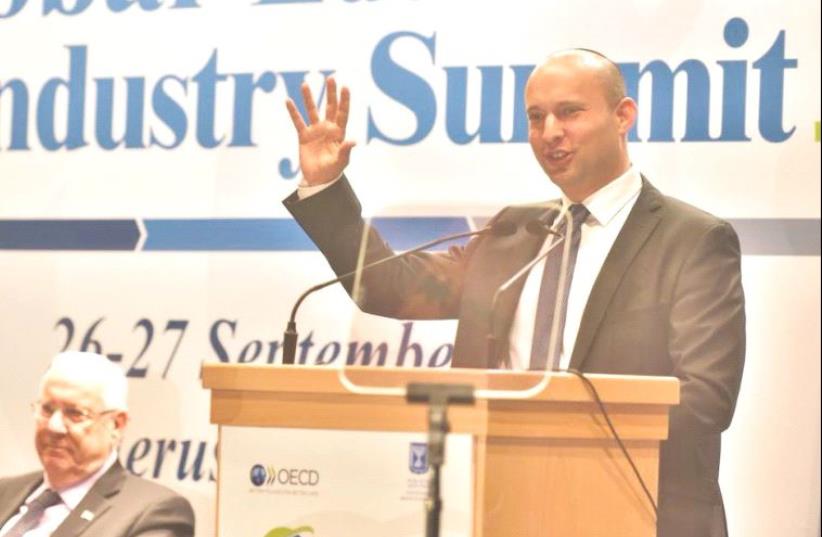 EDUCATION MINISTER Naftali Bennett speaks at the OECD global summit in Jerusalem yesterday as President Reuven Rivlin looks on.
(photo credit: Courtesy)
Advertisement
Israel is the right place to hold an international conversation on innovation in education, OECD director of education and skills Andreas Schleicher said Monday.He made the remarks at the opening of the Organization for Economic Cooperation and Development Global Education Industry Summit, organized jointly with Israel’s Education Ministry and the European Union, held this year in Jerusalem.The conference brought together some 30 education ministers and delegations from around the world. Education Minister Naftali Bennett, President Reuven Rivlin and European Commission representative Martin Reichert also delivered keynote remarks.“In this room we have the world’s real security council: the education security council,” Bennett told his counterparts.“The leaders in this room have the power to transform the world to make people more tolerant, more mindful, more creative and to provide a real opportunity for the children of the world,” he said.Bennett initiated the international conference, personally reaching out to his counterparts in OECD countries and inviting them to attend.The global summit’s focus is on integrating technological innovations into the global education system to improve the learning environment in schools and kindergartens throughout the world.Education delegates discussed the joint global challenges facing education in the 21st century – among them the need to incorporate new and innovative teaching methods and learning environments in schools and equipping pupils with the skills for tomorrow’s jobs, the majority of which don’t exist today.The delegates were also exposed to Israeli innovation, with an emphasis on creativity within the formal as well as informal education framework.“A big storm has descended upon the Middle East,” Bennett said, alluding to the “Arab Spring,” Syrian civil war and emerging terrorist groups.“In the epicenter of this big storm, there stands a lighthouse – Israel is a lighthouse in the storm,” he said.Bennett outlined a number of Israel’s impressive achievements from generating water in deserts across Africa to multiplying cucumber and tomato growth tenfold in India as well as securing 70% of Internet banking transactions throughout the world from cyber fraud.“We do good, because that’s our mission, that’s our destiny. In Hebrew it’s called ‘Tikun Olam’ – fixing the world,” he said. “We’ve been here, in the Land of Israel, for the past 3,800 years doing good for the world, and we will continue.”President Reuven Rivlin also addressed the delegates: “In a changing world with an unpredictable job market and amazing technology, there is one thing that doesn’t change: Our need for human connection, for partners, our ability to learn from others and improve ourselves with their help.”Rivlin said that being a part of the OECD has helped Israel to examine itself and work harder and improve where needed.“We have things to improve, but we also have reasons to be proud. Israel has the highest number of tertiary education [institutes] in the OECD countries, and is the third most educated country in terms of high school and higher education graduates,” he noted.The president said the OECD yearly report on education has raised a number of questions as to the influences of the global world on local and global identities as well as the responsibility of the education system.“The answer – as we see it in the President’s Office – is what we call ‘Education for Partnership,’” he said.Rivlin stressed the importance of creating a sense of positive identity for every community while teaching understanding between different sectors of society.“We need to provide skills to debate, yet respect different outlooks. We need to create bridges and bonds between the different groups in the country. And finally, we need to train the teachers to be partnership leaders. That is the way to raise our children to be good citizens in the societies of tomorrow,” he said.Among the countries who sent delegations are: Germany, Portugal, Switzerland, Finland, Sweden and Australia. Local and international academics and industry leaders also took part in the conference.“Both your education minister and the Israeli education system are on the same ambitious growth path as New Zealand is, and [are] very committed to ensuring that all of our kids are 21st-century savvy and successful,” New Zealand’s Education Minister Hekia Parata told The Jerusalem Post at the summit.The education minister noted that Israel as a nation has “put a lot of emphasis on innovation, on using the mind and creativity to develop resources and opportunities.”She commended Israel for its “undiluted focus on how to take the most advantage of technology and creative thinking.”Parata said, however, that while some schools in Israel are showing this kind of innovation, there are many other schools that are not – “an ongoing challenge for all of our systems.”The New Zealand education minister noted that there are similarities between the two countries’ education systems, primarily the focus on how to constantly improve and the shared ambition to create a better future for youth.Parata said that even though to date the two countries do not have any formal educational collaboration, she said that New Zealand has an interest in developing new collaborations with Israel as well as other OECD countries.“I’m always on the hunt for what other systems are doing that we might be able to appropriate and incorporate so I come with a very open mind and active listening,” she said.This is the second year the OECD is holding an international conference on the global education industry.