No reports of injuries; authorities investigating origin of fire. 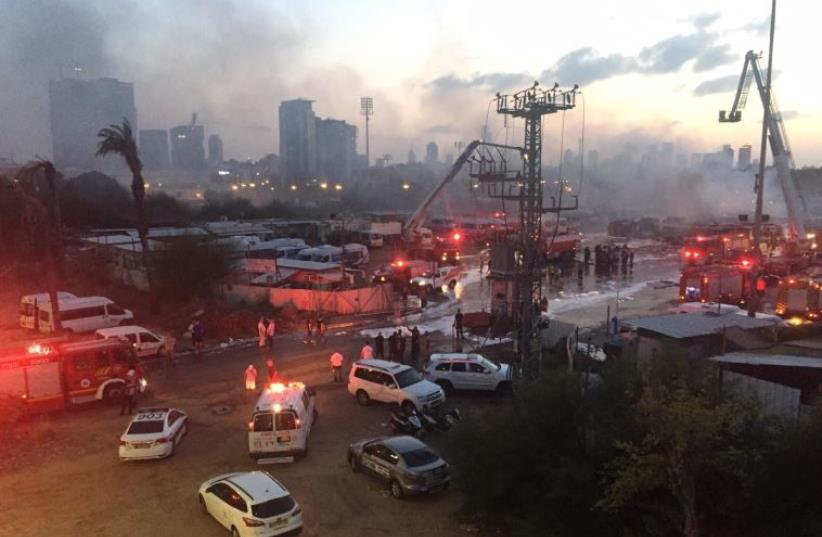 Firefighters control blaze at Dan bus company parking lot
(photo credit: ALONI MOR)
Advertisement
More than thirty buses were damaged on Saturday in a fire at a Dan depot across from the Ayalon Mall in Ramat Gan.Smoke from the massive blaze, which forced the closure of some of the city’s busiest thoroughfares, was visible across the Dan region.
Bus parking lot fire
At least 20 fire teams from around the region battled the flames, which was put out in the early evening.No one was injured at the facility, which was empty on the Sabbath.
As of Saturday night, the origin of the blaze remained unclear, and police from the Dan subdistrict said they had set up a task force to look into the fire, together with investigators from the National Fire and Rescue Service. The Dan Bus Company confirmed that the fire damaged 32 buses but said there would be no schedule changes to service on Saturday night or Sunday.The Environmental Protection Ministry warned that air-pollution tests conducted by its teams revealed that the area around the Ayalon Mall contained high levels of respirable particles and, therefore, recommended that civilians be evacuated from the area for health reasons, and advised the mall to close its doors and windows to prevent the entry of contaminated air.
Advertisement
Subscribe for our daily newsletter