Eligible candidates must have made aliya from an English-speaking country and have made significant contributions to the Jewish State. 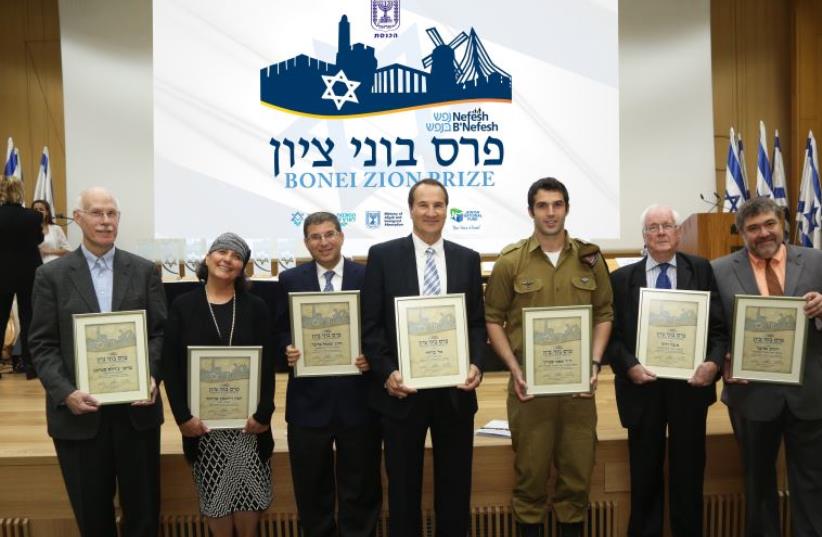 Nefesh B'Nefesh prize group
(photo credit: NEFESH B'NEFESH)
Advertisement
Nefesh B’Nefesh is inviting the public to submit nominations for the 2016 Bonei Zion Prize recognizing outstanding Anglo Olim – both veteran and recent – who have proved to embody the spirit of modern-day Zionism by making a major impact on the developing State of Israel.Eligible candidates must have made aliya from an English-speaking country and have made significant contributions to the Jewish State. The deadline for submitting nominations is Dec. 31, 2015. Nominations forms may be submitted at:

www.boneizion.org.il/nominate.“For years we have been witnessing the amazing impact Anglo Olim are having on the State of Israel in a variety of fields and we felt that their contribution to our state needs to receive the public platform it truly deserves, “said Nefesh B’Nefesh Co-Founder and Executive Director Rabbi Yehoshua Fass. “Since the launch of the Bonei Zion Prize in 2013 we have been exposed to more and more impressive Olim who are having significant influence on the successful development of the State of Israel. We are all looking forward to receiving this year’s submissions and learning about additional outstanding Olim making their mark on Israel.”Winners will be selected by a prestigious panel of committee members, who will award $10,000 prizes in six categories: Community and Nonprofit; Culture, Sports and Arts; Education; Entrepreneurship and Technology; Science and Medicine; and IDF & National Service Young Leadership. The award recipients will be announced on April 4, 2016.
Advertisement
Subscribe for our daily newsletter