Prior to heading the Smithsonian, Skorton also served as president of Cornell University for nine years. 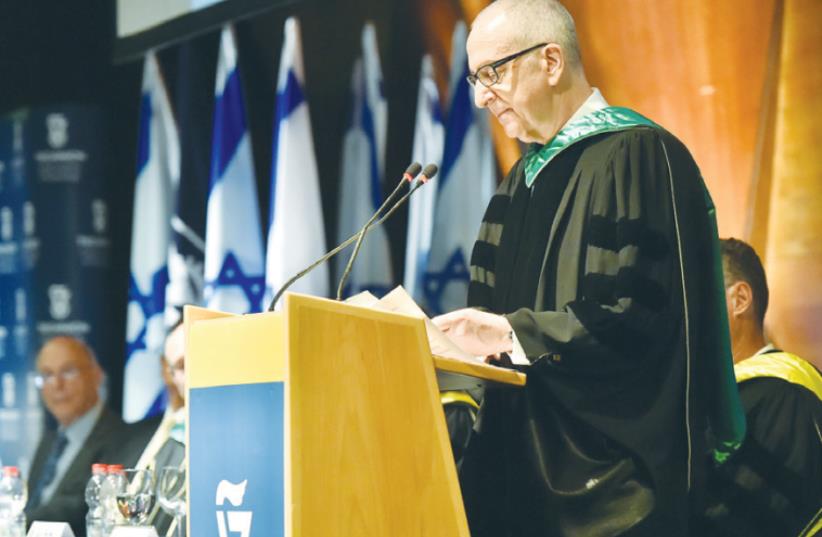 DAVID SKORTON, secretary of the Smithsonian Institution, receives an honorary doctorate from the Technion–Israel Institute of Technology.
(photo credit: NITZAN ZOHAR)
Advertisement
“The idea of academic boycotting goes against the most basic principle of academia, period,” David Skorton, head of the Smithsonian Institution, told The Jerusalem Post.Visiting Israel this past week to receive an honorary doctorate from the Technion–Israel Institute of Technology, Skorton noted that “Many people who have not visited Israel don’t really understand the multi-dimensional nature of Israeli society.The only understanding is gained from reading press coverage from unfortunate circumstances: Palestinians attacking Jews, the IDF attacking Palestinians, and so on – as if that is the whole story of Israel. As people understand more about Israeli society, they understand that there is a broad multiplicity of viewpoints.”Skorton said that cutting off communications with Israeli institutions would not resolve the longstanding conflict.“My personal belief is that you don’t get better by failing to talk to each other,” he said, adding: “That is not to say that there are not areas that I disagree with the Israeli government, or of any country’s government.But the lack of education that will be engendered by a boycott is not helpful, and will isolate Israeli universities.”Prior to heading the Smithsonian, Skorton also served as president of Cornell University for nine years.The Technion said it was presenting Skorton with a doctorate in recognition of his “exemplary leadership in higher education; and with gratitude for your visionary leadership in creating the partnership between Cornell and Technion, pioneering a new paradigm for higher education at Cornell Tech and the Jacobs Technion-Cornell Institute.”Skorton said that during his tenure at Cornell, he saw firsthand the technological and innovative spirit of Israeli institutions, and the Technion in particular.“The first time I was at the Technion was in the ’80s,” he recalled. “I remember being so impressed with the combination of strength, and all of the basic disciplines of math, computer science and engineering.It was already obvious that there was an emphasis on entrepreneurship and innovation.”Skorton and his wife returned to Israel in 2010, this time leading a tour of college presidents and their wives to learn about the country first hand.“I had met Peretz Lavie [president of the Technion] when we led that tour, and we hit it off right away like we were long lost brothers separated at birth,” he said. “I felt we had great chemistry.”Since that first meeting, the two university presidents expanded their collaborations to include the founding of the Jacobs Technion-Cornell Institute.When asked why Cornell decided to partner with the Technion in this joint endeavor, Skorton said that the two universities quickly understood that they had a shared vision for the joint university.“All over the world, people who work in the field of innovation, entrepreneurship and technology understand that the Technion is one of the leading institutions in the world,” he said.He noted that a few months ago Lavie donated to the Smithsonian a copy of the nano Bible, the world’s smallest printed Bible developed at the Technion.Now in his new role as head of the Smithsonian, which collaborates with over 140 countries, Skorton said there are still many future endeavors in the works with Israeli institutions.“A few weeks ago Menahem Ben-Sasson, president of the Hebrew University [of Jerusalem], visited the Smithsonian to sign a memorandum of understanding to establish the Einstein Legacy Project,” he said.