‘Mayor is trying to punish us because we have different political views,’ says gallery owner who was evicted from his premises after hosting lecture for controversial left-wing NGO. 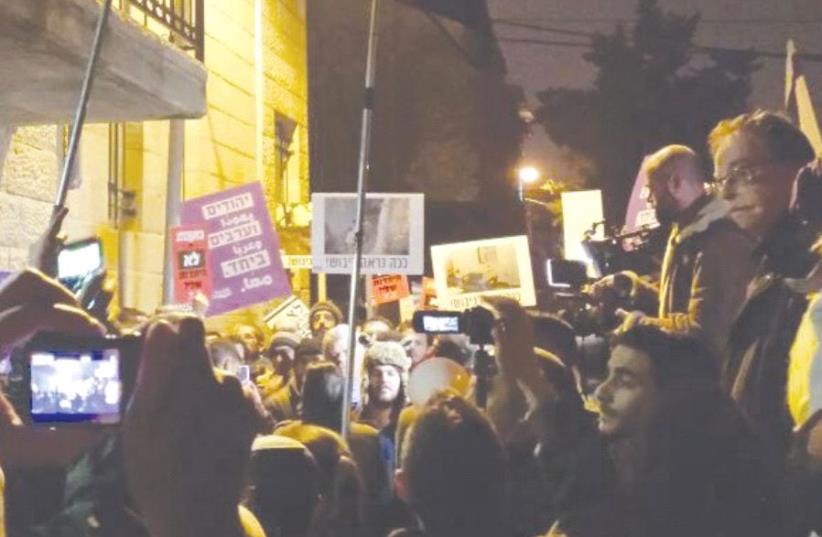 PROTESTERS AND SUPPORTERS of a Breaking the Silence exhibit face one another outside of Barbur Gallery in the Nahlaot neighborhood of Jerusalem last night
(photo credit: RHONA BURNS)
Advertisement
One day after Jerusalem Mayor Nir Barkat abruptly announced the eviction of the owner of the Barbur Art Gallery, which hosted a lecture by the left-wing NGO Breaking the Silence, the group said the mayor was unequivocally using punitive measures to stifle free speech.Breaking the Silence is composed of veteran IDF soldiers who condemn an Israeli presence in occupied territories, as well as purported crimes against Arab residents there. Its executive director, Yuli Novak, spoke at the Nahlaot gallery Wednesday night.While Barkat contended that the eviction was due to “zoning violations,” Breaking the Silence spokesman Dean Issacharoff said on Thursday that there was no question the right-wing mayor was abusing his authority to intimidate opposing views.“He obviously wants to stifle freedom of speech in order to stop us from talking about our experiences as soldiers in the occupied territories,” Issacharoff said.However, according to Issacharoff, right-wing politicians attempting to cancel the NGO’s events “is nothing new,” and generally has a converse effect.“Every time they try to silence us, we get more requests from people who want to meet us and hear about the reality we experienced in the occupied territories,” he said.Asked what he would say to Barkat if given the chance, Issacharoff replied: “You are silencing soldiers, and cynically handing over the city I grew up in to Lehava in order to further yourself in the next Likud primaries.” Nonetheless, he emphasized that the NGO remains undeterred.“We will continue meeting thousands of people a year all across Israel,” he said. “There is only one way to stop Breaking the Silence: End the occupation.”Barkat’s edict followed heated statements denouncing the lecture by Culture and Sport Minister Miri Regev (Likud) and Deputy Mayor Dov Kalmanovich, both of whom demanded the mayor intercede, and called for the gallery’s shuttering.In a statement on Wednesday, Barkat claimed that the eviction notice followed a year-long deliberation by the municipal legal adviser, who determined that the owner of the gallery breached the city’s legal protocols.Moreover, Barkat said the building must be returned to the city for municipal use within 90 days.According to the mayor, the eviction is unrelated to the lecture.“It has no connection to freedom of expression,” he contended. “The municipality needs the structure, and is actively consulting with representatives of the neighborhood about future use.”Meanwhile, the gallery’s owner and curator, Masha Zuslam, expressed incredulity over the eviction, noting that she has not received any warnings or notices from City Hall.“We didn’t get anything from the municipality,” Zuslam said, adding that she has run the gallery for nearly 12 years without any previous warnings of wrongdoing. “Everything we know is from the press.The mayor is trying to punish us because we have different political views.”Despite a protest held by the extreme right-wing group Lehava, Zuslam said the lecture proceeded as planned, adding that far more demonstrators came to support the gallery’s right to sponsor the talk and to condemn the mayor for intervening.“We had a very big demonstration of support,” she noted.While Zuslam said she is considering all her legal options, she lamented what she deemed to be an unjust and retaliatory response by the mayor for exercising the right of free speech.“It’s a pity that the mayor of Jerusalem [has pitted] the artistic and cultural community against his political interests by preventing the basic right of freedom of speech,” she said.“We have had this gallery for 11.5 years without any problems, and all of a sudden it is ‘illegal.’” It remains unclear if the eviction will be enforced within the next 90 days.