“We wanted to keep the photos out as long as we could but we felt like we had no option [but] to print them today”, Pearson's aunt said. 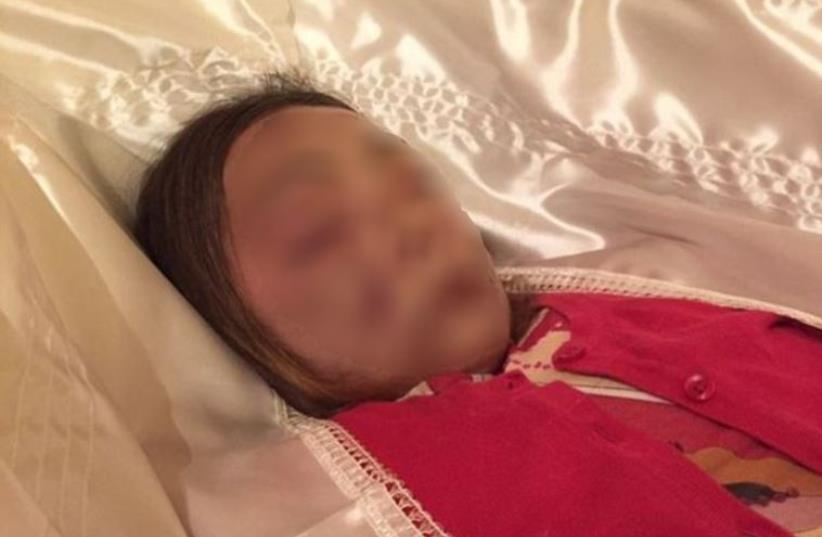 A postmortem photograph of British citizen Julie Pearson
(photo credit: Courtesy)
Advertisement
British tabloids on Sunday published a jarring postmortem photo of a Scottish woman who died in Eilat in November, in a case her family says was botched by police.In the photo, Julie Pearson can be seen lying in an open casket, her face badly bruised and swollen.Her aunt Deborah Pearson said the bruises and injuries to the rest of the body were even worse.Pearson said the decision to release the photo was made out of frustration with the police investigation, and the autopsy last month, which ruled that Julie died of natural causes.“We wanted to keep the photos out as long as we could but we felt like we had no option [but] to print them today,” Pearson said, adding, “I said we have to do something now because how can they say she died of natural causes when her face was covered in bruises, he whole body was covered in bruising.”According to the ruling of the autopsy performed at the Abu Kabir Forensic Institute, the cause of death was determined to be “idiopathic spontaneous intraperitoneal hemorrhage in combination with high blood alcohol level.”The family has cast doubt on that assertion, Pearson says, and she vowed Sunday that once they receive all of the documents they’ve requested from the forensic institute they will take them to a pathologist in Scotland for a second opinion.In January, the story of Pearson reached the House of Commons when Hannah Bardell, an MP from Livingston, told Prime Minister David Cameron that Pearson’s family is “struggling to get answers from the Israeli government and authorities; in particular, they are struggling to get her autopsy report. Will the prime minister meet me to discuss putting pressure on the Israeli government and authorities to look into Julie’s death, so that her family can get the answers that they want and ultimately get justice for Julie?” Cameron responded that while he wasn’t familiar with the case, he would take it up with Israeli authorities.The 38-year-old Kinross native arrived in Eilat in September 2014, and stayed long after her threemonth visa expired. Pearson’s father is Jewish and her grandmother was born in Jerusalem, but an attempt to make aliya failed.The Population, Immigration and Borders Authority said the request wasn’t granted because she failed to procure the proper documentation, but she was in no danger of being deported.Media reports have stated that the bruising was the result of a beating Pearson suffered at the hands of her then-boyfriend, reportedly an east Jerusalem resident named Amjad Hatib. He reportedly beat her a day or two before she collapsed at the Dolphin guest house in Eilat, from where she was taken to Joseftal Hospital and pronounced dead the next day.Deborah Pearson said the family only learned of Julie’s death when she was contacted three days later by one of her late niece’s friends in Eilat, and not from police or Israeli authorities.Though police did not respond to a query by press time Sunday, in January, Eilat police spokesman Itzik Elfasi said the investigation into Pearson’s death is still open and that regardless of a person’s status in Israel, “police examine the cause of death using all tools and means at our disposal, and do everything possible in order to uncover the truth and the identity [or legal status] of the victim does not and would not diminish the means we would use in order to determine the truth.”He added that police had reason to believe that Pearson was beaten the day before she died, but that there was no connection between the beating and her death, which was also the finding of the initial autopsy in the case.