Back to school
(photo credit: MARC ISRAEL SELLEM)
Advertisement
Youngsters across the country, from preschool through high school, are heading back to school, as the 5774/75 academic year kicks off.A total of 2,105,394 pupils are returning to the classroom on Monday morning, including 149,705 first-graders and 112,750 high school seniors.The new school year is expected to open without incident, Education Minister Shai Piron told Prime Minister Binyamin Netanyahu at the education ministry’s situation room in Jerusalem on Sunday. However, as parents, teachers, and students kick off the new academic year, the path leading to the start of the school year today was plagued with uncertainty. From Operation Protective Edge to the announced budget cuts, overcrowding in classrooms and system-wide reforms, the new school year faces countless challenges. On Sunday, one day before the start of the new school year, the cabinet approved a 2 percent budget cut to the Education Ministry, totaling some NIS 480 million to the 2014 budget, as well as an additional NIS 175.5 million to the higher education budget to help pay the costs of Operation Protective Edge.    Which programs will be adversely affected by the proposed 2014 budget cuts still remain unclear, although Piron explicitly stated that none of the “core” programs of the ministry will be harmed.   Also unclear, is the education ministry’s budget for 2015 which is currently under negotiation.  Earlier this week, the Bank of Israel hinted that the ministry will not receive the additional NIS one billion in funding it requested for next year’s budget.In addition to the cutbacks, Operation Protective Edge continues to cast its shadow over the beginning of the school year.  Education Minister Shai Piron reiterated on Sunday that the education system will open the year under a “different format.”“We will open the first two weeks of the year, among other things, with a discussion on solidarity, the importance of the State of Israel and of its values. We will talk about the need to maintain a culture of dialogue and freedom of speech. We will talk about the need to eliminate expressions that are unsuitable and can lead to the destruction of society,” he said. As such, educators will devote the first two weeks of studies to addressing the war that dominated the summer vacation.  Students will spend the first days of the school year engaging in special creative activities, holding discussions with their teachers, sharing personal experiences and participating in sessions with guidance counselors.Piron also told Netanyahu that in the Southern communities within a 7km. radius of Gaza, additional funds had been transferred to schools to hold special “fun” activities for the children, who had missed out on their summers, during the first days of school. In a video conference with the education ministry's southern district situation room, Netanyahu said he wished to "strengthen and hug you together with all the people of Israel" and said he hoped the children in the South would make up for their lost summer during the high holidays in Tishrei.The new school year will also see the launch of a “meaningful learning” reform, called “Israel moves up a grade.” The program originally unveiled at the beginning of January, aims to provide a more challenging learning experience through a combination of essential content and general education, science education and increased community involvement.“We begin this year in a festive manner, because this year Israel moves up a grade,” said Piron. “We will start with our national meaningful learning program, which begins in the first grade and continues until grade twelve. The program will prepare the children of Israel to face the challenges of the 21st century.”The new reform is the result of the cooperative efforts of professionals from the Education Ministry, academic experts, school principals, teachers, students and parents. It is based on a number of key pillars: advocating increased trust in all facets of the educational system, pedagogical continuity from preschool to higher education, new methods of academic measurement, improved educational technology and academic excellence.One of the major facets of the reform includes a restructuring of the matriculations exams which will begin in 11th grade, not 10th. The exams are to cover 70% of the material learned, with the remaining 30% subject to a final student research project.Students will be required to complete courses in both the sciences and the humanities to be eligible for a matriculation certificate – as well as perform three years of individual and group volunteer services in the community, totaling some 180 hours.“We will work on excellence in all areas and in all fields of study, we will increase the number of outstanding students in mathematics and other subjects,” said Piron. “In addition, we will also invest in moral excellence. All the children of Israel will begin to volunteer and engage in social and community activities, which will bring the students values of solidarity.”The plan also calls for reforms in elementary schools, with the aim of providing more autonomy for teachers and schools. All public elementary schools are to transfer to a self-management system, allowing for increased pedagogical and organizational flexibility. Schools would independently decide what to teach and how to teach for 25% of the total hours. 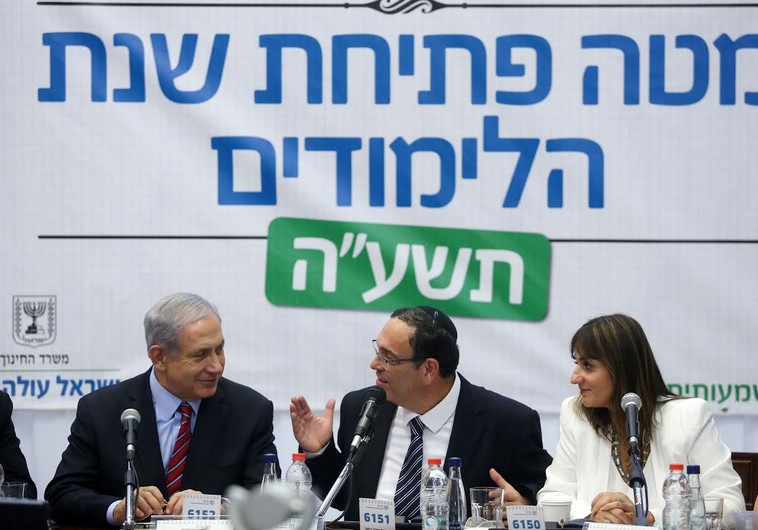 The idea is to allow schools to use these hours to expand in a particular field or integrate a school-formulated curriculum.With regards to elementary schools, the summer saw the formation of a nationwide movement – dubbed the “sardine protest” – which garnered considerable support among parents protesting their children’s learning conditions in overcrowded classrooms.On Friday, just three days before the start of the school year, the initiators of the protest announced that they had reached an agreement with the Education Ministry.“Following our many efforts in cooperation with the National Parent's Association we have received solutions for schools across the country where there are particularly crowded classrooms,” the initiators said.According to the organizers of the protests, the Education Ministry expanded hours for which classes will split into two separate groups for the study of core subject.  “This is the first positive indication for the achievement of higher quality learning for children in the 2014/15 school year until the education ministry implements its new plan [to address overcrowding],” the initiators said. Earlier in the week, negotiations between the Education Ministry and the initiators of the protest to find a solution to overcrowding for the school year that begins on Monday broke down, with many parents calling for a nationwide strike of first-grade classes.The protest was launched in May, following the Education Ministry’s decision not to allow wealthier local authorities to open additional classrooms in kindergarten and elementary school classes.The ministry ordered local authorities to maintain the national standard of up to 40 children per class and directed the opening of more classes only if the number of pupils exceeded this number. The rationale was to maintain equality between wealthy and poor municipalities.The High Court of Justice upheld the ministry’s decision.Parents of the Sardine Protest claim theirs is not an elitist cause, but rather a middle class movement affecting children in schools throughout the country, and call to reduce the maximum number of children per class in the first and second grades from 40 to 32.Despite the court ruling, the Education Ministry and the initiators of the protest, which has garnered the support of parents and parents associations throughout the country, have made an effort to address the issue of overcrowding.Education Minister Shai Piron appointed a commission, which included local authority figures and parent’s association representatives, to recommend solutions and examine the possibility of assigning more teachers.While, the sardine protests seemed to have been resolved peacefully, MK Ahmed Tibi (United Arab List-Ta’al) announced late Sunday evening that schools across the city in Taibe would strike the first day of school in protest over the death of murdered principal Yussuf Haj Yihya, who was shot by masked gunmen last week. Tibi said the strike would serve as a joint call for the residents of Taibe to make their voices heard against the murder, which he said continues to shock the city, and serve as a statement against crime in Arab communities.