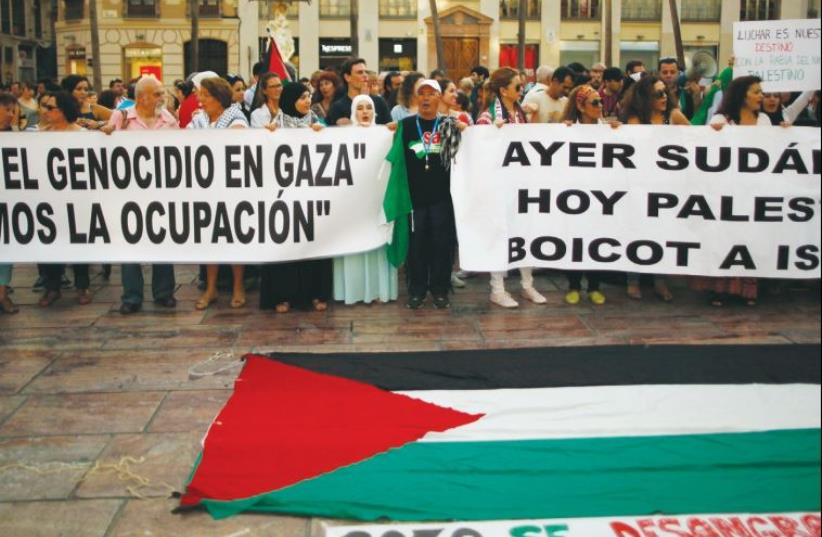 The banners read: Stop the genocide in Gaza. Stop the occupation. Yesterday South Africa, today Palestine. Boycott Israel. Gaza bleeds
(photo credit: REUTERS)
Advertisement
A Democratic candidate for a seat in the California state assembly blames Israel for committing genocide against the Palestinians and has offered her support for antisemitic Nation of Islam leader Louis Farrakhan.Maria Estrada, a candidate for California’s District 63 representing the southeast suburbs of Los Angeles, garnered the second most votes, some 28 percent, in a top-two primary on June 5 for the November election. She will run against incumbent and fellow Democrat Anthony Rendon, who also serves as Speaker of the California State Assembly.In an op-ed published in the Los Angeles Jewish Journal, Rabbi Abraham Cooper and Dr. Harold Brackman of the Simon Wiesenthal Center noted that Estrada posted last year on Facebook: “Democrats turn a blind eye to the genocide against Palestinians and justify it by bringing up the Holocaust. As if what happened 70 years ago justifies it. Anyone who believes they are one of ‘God’s chosen people’ automatically feels superior and justified in all they do. Religious fanaticism is used to justify apartheid and crimes against Palestinians and no one should be okay with it. #FreePalestine”On Tuesday she posted a screenshot of a dictionary definition of the term genocide, and wrote: “Because some people are unsure of the meaning of the term genocide because the number of people being murdered isn’t enough for them. #FreePalestine.”She added in a comment to her post: “The argument from Zionists is that the number of Palestinians has grown. Apparently they aren’t killing enough Palestinians for them to consider it a genocide.”The op-ed also noted that Estrada tweeted that ““I, for one, enjoy listening to Farrakhan’s sermons.”Earlier this month Estrada also used the hashtag #FreePalestine to show her support for five women who left their Birthright Israel tour early “to protest the program’s bias and attempts to hide the Israeli occupation of Palestine.”In a July 6 statement, the Progressive Zionists of the California Democratic Party in a statement said it is “concerned” about Estrada’s “public support of notorious homophobe and antisemite Louis Farrakhan and her repeated and extreme antisemitism in the guise of ‘criticism of Israel.’”The statement noted other antisemitic Facebook posts including one on May 10, 2017, in which she posted a cartoon replacing the Star of David on the Israeli flag with a swastika, a post for which she apologized the following day, and a more recent post, on May 14, in which she criticized California Democratic Chair Eric Bauman for not keeping “your party, your religion and your people in check.”“While we are not endorsing any candidate in this race, we must conclude that Maria Estrada’s repeated expressions of antisemitism disqualifies her from seeking public office. We call on Maria Estrada to resign from this race, apologize for her blatant antisemitism, and take the necessary time to consider her harmful and hateful words,” the group said.In a statement to the Forward regarding her social media posts Estrada said: “To be clear, I am anti-Zionism, not antisemitic. Listening to Farrakhan doesn’t equate to being antisemitic. There is no doubt he is wrong on many issues, including Judaism. Listen to him speak on the American media, imperialism and several other issues.”