Can Israel and U.S. convince India, others to condemn Hamas at the U.N.? 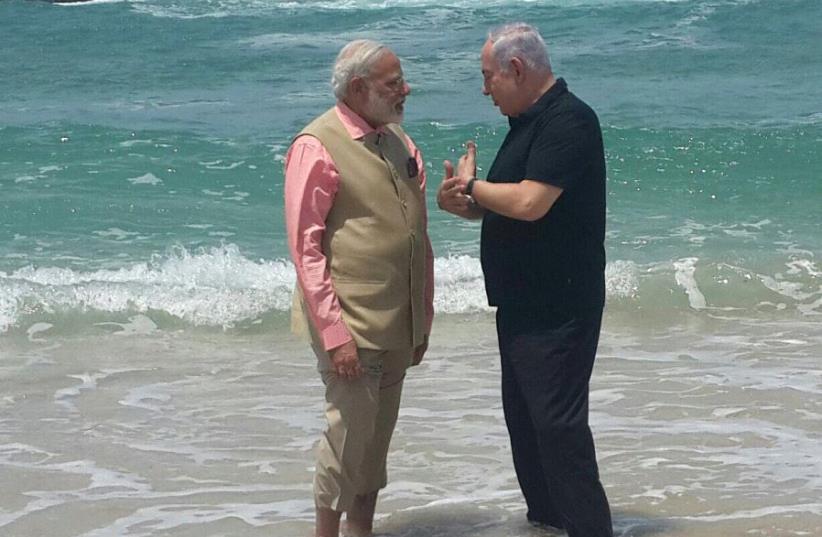 Israeli Prime Minister Benjamin Netanyahu and Indian Prime Minister Narendra Modi tour Dor Beach on the third day of Modi's visit to Israel‏
(photo credit: Courtesy)
Advertisement
Jerusalem and Washington are focusing efforts to pass an anti-Hamas resolution in the UN on Thursday on countries that abstained on a similar motion in June, Israel’s Ambassador to the UN Danny Danon said.These include countries with which Israel has very strong ties, such as India, Kenya, Ethiopia, Philippines, Mexico, Panama, Romania, Rwanda and Uganda. Danon said the working assumption is that those 62 countries that voted for a US-backed amendment condemning Hamas in June will vote for it this time as well, and those 58 that opposed it then will also oppose now. The 42 countries that abstained are being targeted to change their vote.The amendment in June was to a resolution that condemned Israel for the Gaza violence and called for protection for the Palestinian civilian population. The amendment garnered a majority, but failed to pass because of procedural issues that necessitated a two-thirds majority. The initial resolution, condemning Israel, passed.Danon said that Hamas has mobilized Iran in the UN, as well as the Palestinian Authority, to press countries to vote against the current measure. Israel and the US, he said, are pressing equally as hard to get the motion passed.Danon said that in his conversations with fellow ambassadors at the UN, he is stressing that the resolution was not for Israel or against the Palestinians, but rather a resolution against a terrorist organization. He said his message to those who abstained in the summer was, “You can’t sit on the fence. Tomorrow there will be a terrorist attack and you will come to the UN to seek a condemnation. No country is immune.”Danon expressed amazement that Hamas was sending letters to the UN and dispatching representatives to various countries to lobby against the move, as if it was a political entity, not a terrorist group.US Ambassador to the UN Nikki Haley is expected to present the resolution on Thursday. She tweeted this week that the “UN will vote on a US resolution supported by the EU that condemns Hamas’s destructive actions. Countries must now ask themselves: Are they for or against Hamas’ violence? The choice is clear for the US – we hope it will be for the rest of the UN as well.”Jerusalem and Washington’s diplomatic efforts on this issue are not only taking place in the halls of the UN, Danon said, but also in capitals around the world where the decisions on how to vote are being made.Danon said everything in the UN “is a precedent,” and that the Palestinians are concerned if the resolution is passed, it will be among the bundle of resolutions on the Mideast that will be brought up and voted on each year.Danon said the Palestinian Authority and Iran, which are used to being on the offensive in the UN against Israel, have found themselves in recent days on the defensive when it comes to this resolution, “something they are not used to.”